Dolphins Will Look Smart (Or Dumb) on Gase

Which way do you think it will go?

When I first heard the New York Jets were going to hire Adam Gase as their new head coach, I was stunned. He was just fired two weeks ago and was part of the problem with the Miami Dolphins. When Gase got let go a lot came out about what went wrong. He had lost players in the locker room to the point that some players weren’t going to come back. Reports surfaced that Gase got into a heated argument with owner Stephen Ross over the roster. Also, players felt Gase defended quarterback Ryan Tannehill too much and didn’t hold him to a standard like everyone else on the team. Gase also made excuses for why the team struggled because of injuries and playing teams on the road at the wrong time. When you start making excuses for your teams performance after being here for 3 years it’s time for a change.

The thing I laughed about when Gase was hired by the Jets, was when Jets acting owner Christopher Johnson took a call from Peyton Manning endorsing Gase and giving him a great recommendation. Look it’s great for someone to make a great recommendation for someone for a job, but I just want to throw up at that. Gase gets a lot of credit for the work with Manning really? Manning was a hall of fame quarterback before working with Gase and nothing was going to change that. I feel like Gase gets a free pass because of Manning give me a break. While Manning had the best year statistically, but over the past 5 years it has been easier than ever for quarterbacks to throw for 50 touchdown passes or more because the rules of the game favor offense now a days and Gase never came close to that success with the Dolphins.  I hear people say Gase did well in spite having Ryan Tannehill at quarterback please stop. Gase was all in on Tannehill and whoever he brought in to play quarterback when Tannehill got hurt. He had every chance to bench him if he wasn’t playing well, but he always defended him and his play always passing the buck. Gase had control of the 53-man roster and if he wanted to get another quarterback, he could have pushed for one especially in last year’s draft when 4 quarterbacks were taken ahead of the Dolphins, but instead he went all in on Tannehill. 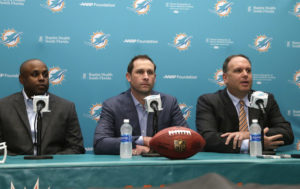 Mike Tannenbaum took a lot of blame for how the roster was made up especially with the salary cap and he deserves it, but Gase deserves just as much. He constantly shipped out talented players like Ndamukong Suh, Mike Pouncey, Jordan Philips, Jarvis Landry, and Jay Ajayi most notably and didn’t get enough talent to replace then. He had players like Brock Osweiler, Jay Cutler, and Julius Thomas guys he previously coached and got nothing out of those guys. Gase was also clueless with what was going on with his team like Lawrence Timmons going AWOL before the 2017 opener and not knowing what was going on with Reshad Jones when he took himself out of the game against the Green Bay Packers or the incident with assistant coach Chris Forester snorting cocaine at team headquarters how do you not know what’s going on with his own team. Plus, he was so clueless on the sideline being by himself looking at offensive plays rather than watching what was going on with his defense when it was clear his defensive coordinator Matt Burke was in over his head as a first-time coordinator.

Now Gase gets a second chance two weeks after being fired and he goes to the rival Jets. If anything, this spices up this rivalry because Gase will want to prove the Dolphins were wrong in firing him. Gase is going to have a lot more scrutiny with the New York media and if he doesn’t win right away its going to get 100 times worse and excuses like injuries or playing teams at the wrong time won’t cut it. I find it funny everybody brings up Gase was 5-1 against the Jets and one 2 games against the New England Patriots and gave them problems. First, Tom Brady and the Patriots always have problems when they come to Miami for whatever the reason no matter who the coach is. When Gase’s teams went up to New England how did they do? They got their butts kicked each time. Plus, so what if the Dolphins went 5-1 with Gase reality is half of those wins came by one score so it’s not like his teams dominated the Jets.

One thing we will find out right away is how good the Jets young quarterback Sam Darnold is. If the 21-year-old turns out to be a franchise quarterback, then Gase will get the credit working with him while rubbing it in the Dolphins faces. The Jets also have close to 100 million under the cap and the number 3 pick in the draft so who knows the Jets could become good right away while the Dolphins could be down in the dumps in their rebuilding who knows. The hiring of Gase to the Jets is going to make either team look good or bad there is no in between here. Gase is either going to look good and make the Dolphins look stupid for letting him go or he is going to fail again we are going to find out right away.