On this day 35 years ago, Dan Marino capped his MVP season with a 4-touchdown performance in a thrilling Monday night victory over the Dallas Cowboys

The game of football has certainly evolved over the last three and a half decades, but the second season in the legendary career of Miami Dolphins’ quarterback Dan Marino was unlike anything anyone had ever seen. Marino capped that MVP regular season in memorable fashion on this day ago.

At home on Monday Night Football against the Dallas Cowboys on Dec. 17, 1984, Marino would beat Fouts’ yardage record and throw four more touchdowns, including the game-winner as Miami slipped past Dallas, 28-21. Marino would finish the night with 340 yards passing, four touchdown passes — three to Mark Clayton — and two interceptions, but the game wasn’t decided until the clock hit triple zeros.

The teams would account for five total touchdowns in the final quarter, including three in the final 151 seconds. The Dolphins never trailed on the evening, but found themselves in a tie game with less than three minutes to play.

With the score knotted, Marino found Clayton for a 39-yard touchdown pass with 2:31 to go to put Miami ahead, 21-14. It took the Cowboys just 44 seconds to respond, thanks to a lot of luck. With less than two minutes to play, Dallas quarterback Danny White had a pass bounce off the hands of Miami’s Don McNeal and into the arms of an uncovered Tony Hill, who raced 66 yards for the tying score with 1:47 to play.

That would prove to be too much time for Marino. Facing 3rd-and-2 on the ensuing drive and needing just a field goal, Marino found a wide open Clayton in the middle of the field. Cowboys’ defenders weren’t able to get close to him as Clayton caught the ball in stride, turned upfield and went 63 yards for the game-winning score with 51 seconds remaining.

After letting one slip through his fingers on the previous Dallas possession, McNeal intercepted White near midfield to put the contest away. William Judson also had an interception for the Dolphins to thwart an early Cowboys’ drive. 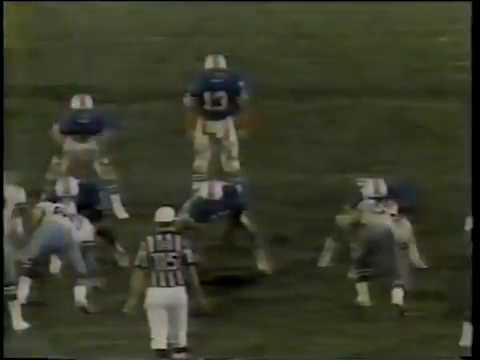 Clayton finished the night with 150 yards receiving and the three scores. In addition to the two fourth-quarter touchdowns, Clayton got the scoring started with a 41-yard touchdown reception from Marino midway through the second quarter. Marino would double the Miami lead early in the third quarter on a 3-yard touchdown pass to tight end Bruce Hardy.

The win tied a Miami franchise record for regular season wins with 14 and put Marino in the record books. The loss eliminated the Cowboys from the playoffs and gave the New York Giants a wild card berth. The Dolphins would go to reach Super Bowl XIX where they were defeated by the San Francisco 49ers, 38-16.

In 35 seasons since, the Dolphins have not been back to the Super Bowl nor have they won more than 12 games in any season. The final regular season contest from that memorable 1984 campaign was memorable itself and it happened on this day 35 years ago.