25 years ago today, the Miami Dolphins beat the Detroit Lions on Christmas night to clinch the AFC East

All Miami Dolphins’ fans wanted for Christmas was an AFC East championship as the Dolphins played host to the Detroit Lions in the 1994 regular season finale at Joe Robbie Stadium.

The Dec. 25, 1994 contest between the teams was the only game that night. Both teams entered the night with a record of 9-6 and needed a victory to win their respective divisions.

The New England Patriots had won the day before to improve to 10-6, but Miami had won both meetings between the teams and needed only to win to clinch the AFC East. The Dolphins used a strong early start to do just that in a 27-20 victory that sent Detroit on the road for the Wild Card round.

Pro Bowl quarterback Dan Marino passed for 285 yards for Miami that night, but it was running back Bernie Parmalee who finished the drives. Parmalee scored all three Miami touchdowns in the victory.

The Dolphins wasted no time getting on the scoreboard as Parmalee scored from a yard out to cap the opening drive. After Detroit’s Jason Hanson and Miami’s Pete Stoyanovich traded field goals, Parmalee found the end zone twice in the second quarter on runs of one and six yards to give the Dolphins a commanding 24-3 lead.

The Lions showed signs of life with just over a minute to play in the first half as Johnnie Morton returned a kickoff 93 yards for a touchdown. A minute however, proved to be too much time as Marino marched Miami down the field to set up a 45-yard Stoyanovich field goal with just seconds left in the half.

Up 27-10 at the break, the Dolphins did not score again, but the defense held firm. After a 40-yard Hanson field goal late in the third quarter, Detroit pulled to within a touchdown on a touchdown pass from Dave Krieg to Aubrey Matthews with just under six minutes remaining.

Detroit would come up with a critical stop and began its next drive at its own 35-yard-line, but as Krieg passed for Morton near the sideline, Dolphins’ safety Gene Atkins laid a vicious hit. The ball popped out of Morton’s hands and into the arms of fellow safety Michael Stewart for an interception.

After a 20-yard completion from Marino to Parmalee moved the Dolphins to the Detroit 40-yard-line, they would convert a 3rd-and-19 on a screen pass from Marino to Aaron Craver. Craver fumbled on the play, but wide receiver Irving Fryar scooped up the football to preserve the possession and cement the victory. 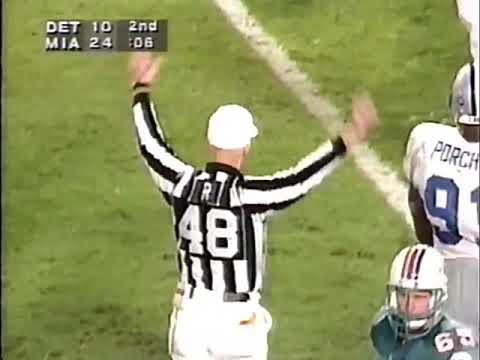 The top receivers for each team on the night were running backs. Craver led Miami with five catches for 67 yards while Parmalee added 47 yards receiving to go with a team-high 39 yards rushing. Barry Sanders led Detroit with 52 yards rushing and 58 yards receiving on seven catches.

Defensively, linebacker Dwight Hollier had an interception for Miami. Defensive end Jeff Cross had two of the team’s five sacks. Pat Swilling had the only sack for the Lions.

The Dolphins would go on to beat the Kansas City Chiefs in the Wild Card round before falling to the San Diego Chargers by a point in the Divisional round. Detroit would lose at Green Bay the following week in the Wild Card game.

The division title for Miami would be the last with the legendary Marino under center and with the legendary Don Shula as head coach. It would be six years later before the Dolphins won the AFC East again. The last one with the two legends in aqua and orange was clinched on Christmas night 25 years ago.

Previous article
« The 4th Line Hockey Podcast #262 – The 2019 Holiday Special
Next article
TGT Presents On This Day: Christmas Day the Dolphins and Chiefs Play the Longest Game Ever »

The Detroit Lions: A legacy of failure

I grew up near Detroit all my life until just recently.  My ...