On this day 15 years ago, the Miami Dolphins pulled one of the biggest upsets in the history of Monday Night Football by rallying past the eventual champion New England Patriots

There’s something about hosting the New England Patriots that brings out the best in the Miami Dolphins. Despite enduring their worst season in 35 years, the Dolphins rose to the occasion on this day 15 years ago to rally past the eventual world champions.

Miami was just 2-11 as it got set to host the Patriots for Monday Night Football on Dec. 20, 2004. New England was 12-1, had already clinched the AFC East and was looking for home-field advantage throughout the AFC playoffs. The Patriots led by 11 in the final quarter, but Miami scored the game’s final 12 points in a thrilling 29-28 victory.

The Dolphins would tally just 231 yards of offense in the victory, but four interceptions of New England star quarterback Tom Brady provided life and set up two of Miami’s four touchdowns. Two of those four Brady picks came in the final two minutes.

New England led 14-10 at halftime, but a second interception of Brady by Miami safety Sammy Knight and a long return would eventually lead to the Dolphins going ahead for the first time. After A.J. Feeley found Derrius Thompson near the goal line to convert a critical third down, Travis Minor gave Miami its first lead with a 1-yard touchdown run.

It looked as though that would be the scare the Patriots needed to get going. On the ensuing drive, Brady capped a 10-play march with a short touchdown pass to Corey Dillon to go in front 21-17 late in the third quarter. Another time-consuming drive that ended in another 2-yard touchdown toss from Brady — this time to tight end Daniel Graham — put New England in front 28-17 with less than four minutes to play and seemingly put the nail in the Miami coffin.

Despite having nothing more than pride to play for, the Dolphins responded. Feeley was 4-for-5 passing on the ensuing drive with a pair of completions to Sammy Morris before Morris punched it in for the second time on the evening from a yard out. The 2-point conversion was failed and New England needed only a first down to seal the game as it took over at its own 20-yard-line with just over two minutes to play.

Facing a 3rd-and-9 two plays after the 2-minute warning, Brady did the unthinkable. While being wrapped up and heading to the ground, Brady side-armed a pass up for grabs, which was caught by a sliding Miami linebacker in Brendon Ayanbadejo to set the Dolphins up at the Patriots’ 21-yard-line.

After the Dolphins netted no yards on the first three plays of the ensuing possession, New England was one play away from escaping as Miami faced a 4th-and-10. With the game on the line, Feeley fired over the middle to a leaping Thompson for a 21-yard touchdown as the Dolphins regained the lead, 29-28.

Again, the 2-point conversion was failed and New England was left needing just a field goal as it began at its own 24. After Dolphins’ defensive end David Bowens sacked Brady for a 9-yard loss on first down, Miami’s Arturo Freeman sealed the game with a critical interception.

Feeley finished the night with 198 yards passing. Brady passed for 171 yards and three touchdowns to go with the four picks. Dillon rushed for 121 yards and scored two total touchdowns in the loss. Morris and Minor each rushed for 27 yards for Miami. Morris was also the Dolphins’ leading receiver with six catches for 46 yards. 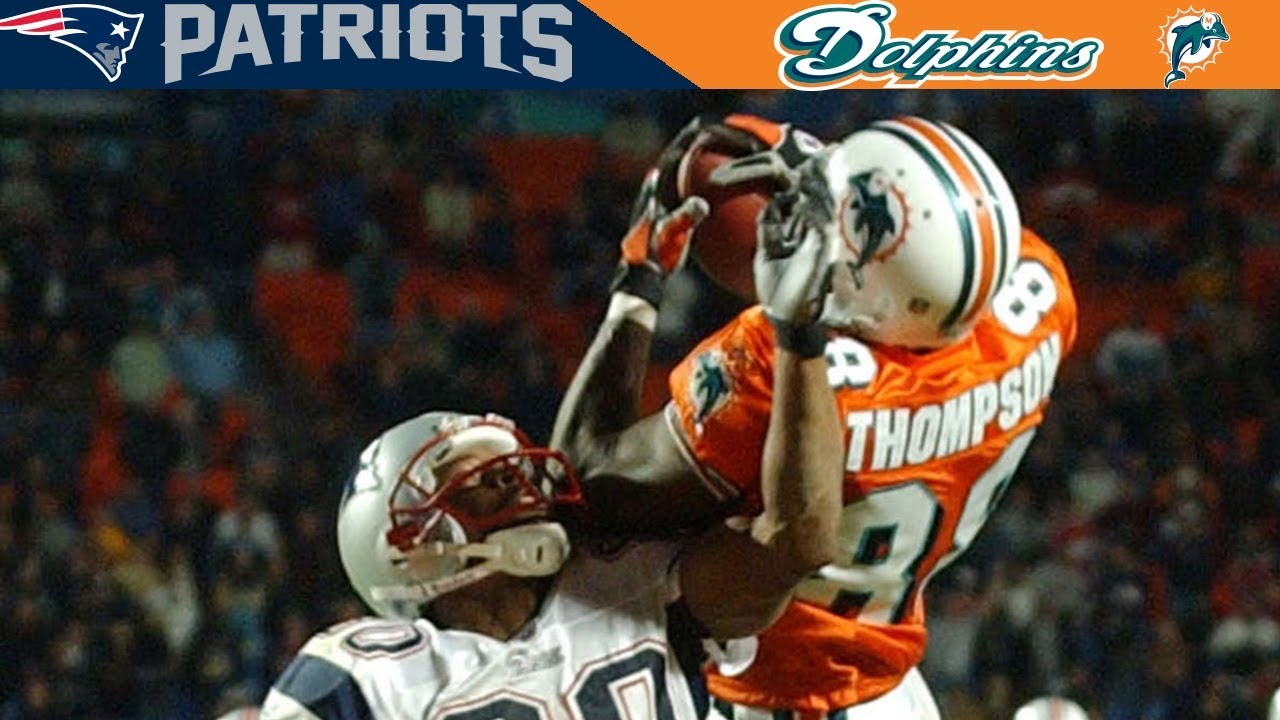 Early on, it looked as though things would go as expected as New England scored on its opening drive, which was capped by Brady’s 31-yard touchdown pass to Kevin Faulk. Miami tied the game midway through the first quarter after a 71-yard punt return by future Patriot, Wes Welker, set up Morris’ — another future Patriot — 2-yard touchdown run. In the second quarter, Dillon scored from three yards out before Miami kicker Olindo Mare hit the game’s only field goal from 30 yards away.

The victory for Miami would serve as one of just four for the 2004 season and marked just the second time in league history that a team with two or fewer wins topped an opponent with 12 or more victories. The loss would also cost New England home-field advantage throughout the playoffs. The Patriots were forced to travel to Pittsburgh for the AFC Championship but still wound up winning a third Super Bowl in four years. The final loss of the season however, was an absolute stunner and it came on this day 15 years ago.

Picking every Bowl game against the spread!