I did not include Super Bowls in this ranking.

Make no mistake these were two great football teams, this makes a list because the Giants lost starting QB Phil Simms late in the year against the Buffalo Bills. His replacement Jeff Hostetler came in and played beyond anyone’s wildest expectations. The games saw only one touchdown scored, but it was still one of the most exciting games you will ever see. Two huge moments in this game did the 49ers in. Late in the 4th quarter Giants defender Leonard Marshall took out 49er QB with a vicious hit, Montana was replaced by backup Steve Young. The biggest moment though had to be 49er legend Roger Craig fumbling the ball as the Niners were attempting to run out the clock. The game ended on a field goal by Giants kicker Matt Bahr, to win the game. 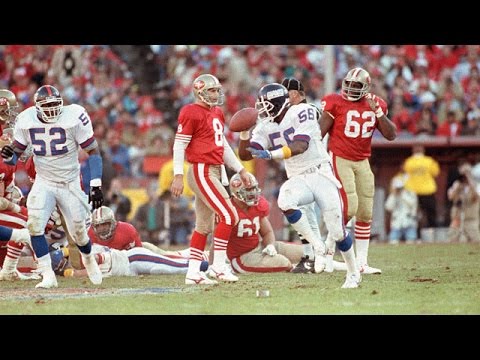 The game was a classic as the Vikings scored on four straight possessions in the first half and went to the locker room with a 20-14 led at the half. In the second half, the Falcons outscored the Vikings 13-7 to tie the game at 27 all in regulation. Chandler hit Terance Mathis again for a score, while Cunningham threw a touchdown to Matthew Hatchette. Gary Anderson had a chance to win the game in regulation for the Vikings but his field goal in the fourth quarter missed, to make matters worse it was Anderson’s only miss of the season. Then in overtime, Morten Andersen connected on a 38-yard field goal to give the Falcons the improbable upset. 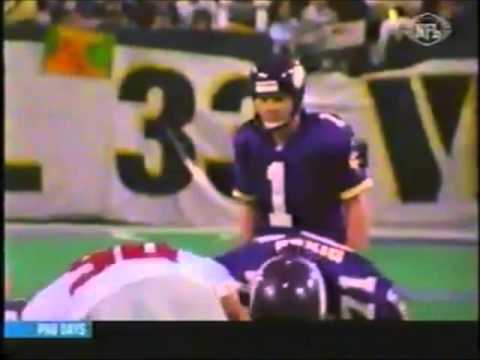 The Cowboys came into this game with an 11-5 record and had played in the two previous Super Bowls. The Rams, on the other hand, limped into the game with a 9-7 record, barely qualifying for the playoffs.

Rams Starting QB Vince Ferragamo tossed two touchdown passes in the first half of the game as the Rams built a 14-5 halftime. The Rams would go on to win 21-19 in what would end up being legendary Cowboys QB Roger Staubach’s final game. 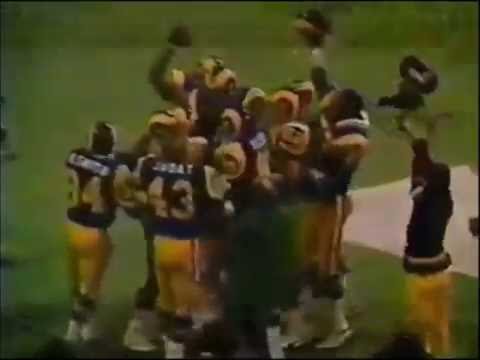 The Colts started the season out 13-0 before finishing up at 14-2. The Steelers struggled early in the year before finally getting hot and slipping into the playoffs with an 11-5 record. The Steelers who were the sixth seed then upset the Cincinnati Bengals in the Wild Card round of the playoffs. They were given little chance to beat the powerful Colts.

The Steelers came out hot and led 14-3 at halftime, a lead that would in the second half become 21-3. The Colts mounted an incredible comeback in the 4th quarter scoring 15 unanswered points to close within 3 points. The Colts had a final chance to tie the game, but kicker Mike Vanderjagt missed a 46-yard field goal with 21 seconds left that would have sent the game into overtime. 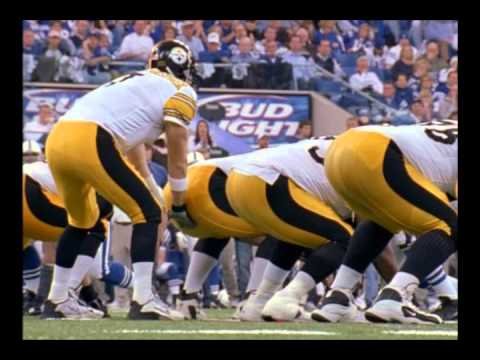 The year before the Vikings were in the Super Bowl, and they came back off that year with a 12-2 record and had not lost at home in two years. The Niners were making their first playoff appearance in over a decade and had finished the season at 10-3-1.

This was a game of turnovers as the Niners fumbled five times losing three of them. The Vikings were worse turning the ball over four times. The Vikings took an early 7-0 led when Paul Krause picked up a fumble and returned it 22 yards for a touchdown. From there the Niners took over scoring 17 unanswered points behind the passing of John Brodie. The Vikings scored a late TD, but never actually threatened the Niners as the Niners won the game 17-14. 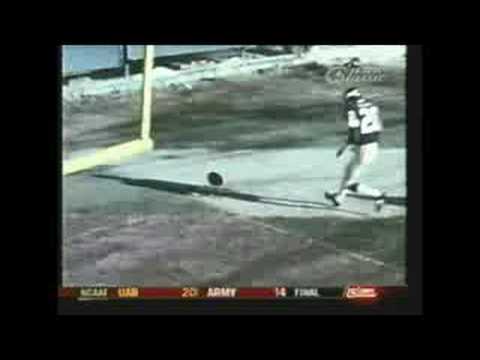 The Dolphins were the 1982 AFC Champions and had replaced QB David Woodley with a rookie QB named Dan Marino. The Phins were the number one seed finishing with a 12-4 record. The Seahawks were making their first trip in franchise history to the playoffs. This looked like a mismatch; it wasn’t!

The Dolphins were their worst enemy in this game turning the ball over five times. The Seahawks star of the game had to be running back Curt Warner who scored two touchdowns and rushed for 113 yards as the Seahawks got the 27-20 upset win in Miami. 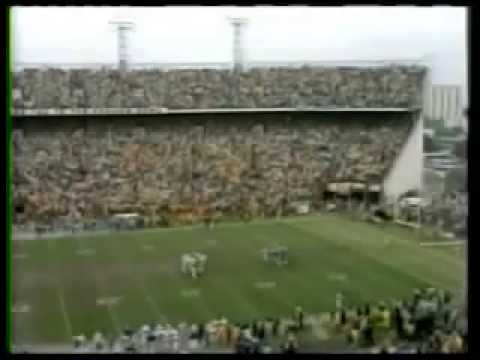 7). 1995 AFC Divisional Playoff The Colts shut down the Chiefs

The Chiefs had the best record in the AFC at 13-3, the Colts were 9-7 and to make matters worst had lost RB Marshall Faulk.

The Chiefs had numerous chances to win this game, but their kicker Lin Elliott did not cooperate as he missed three field goals. Not only that, but QB Steve Bono threw three interceptions in the game. This was just one more bad playoff game to add list to the career list of Chiefs head coach Marty Schottenheimer.

It was even snowing in Lambeau, and the Falcons who were 9-6-1 still won in Lambeau! The Packers went 12-4 and finished in a three-way tie for the best record in the NFC.

The Falcons not only won they destroyed the Packers, as Brett Favre had another one of his playoff meltdowns throwing three interceptions. The Packers turned the ball over a total of five times as they lost 27-7. 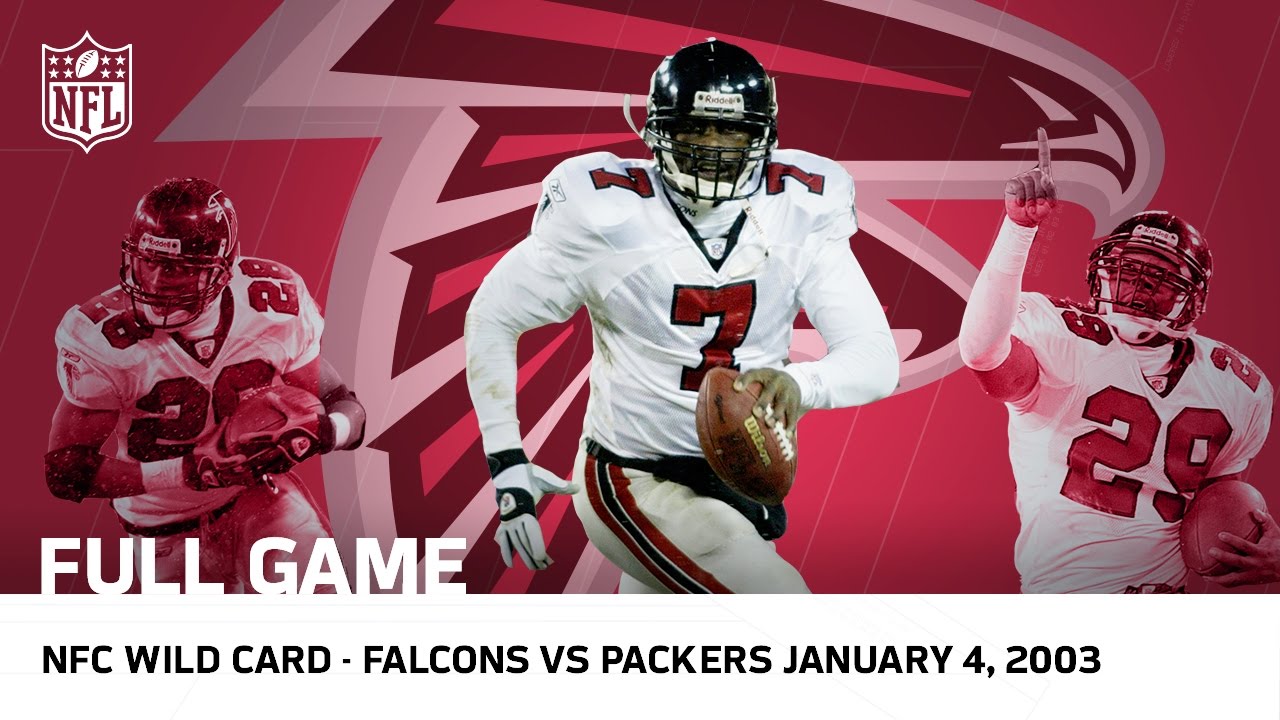 The Niners had the best record in the NFL at 13-2. The Vikings had just slipped into the playoffs at 8-7, but in the wild card, the round had shocked the 12-3 Saints beating them 44-10.

This game is just known as the Anthony Carter game. He came up with ten catches for a playoff record 227 yards (record at that time) and also ran the ball once for 30 yards. The Vikings defense was so good that Niners coach Bill Walsh pulled Joe Montana in the second half for Steve Young. 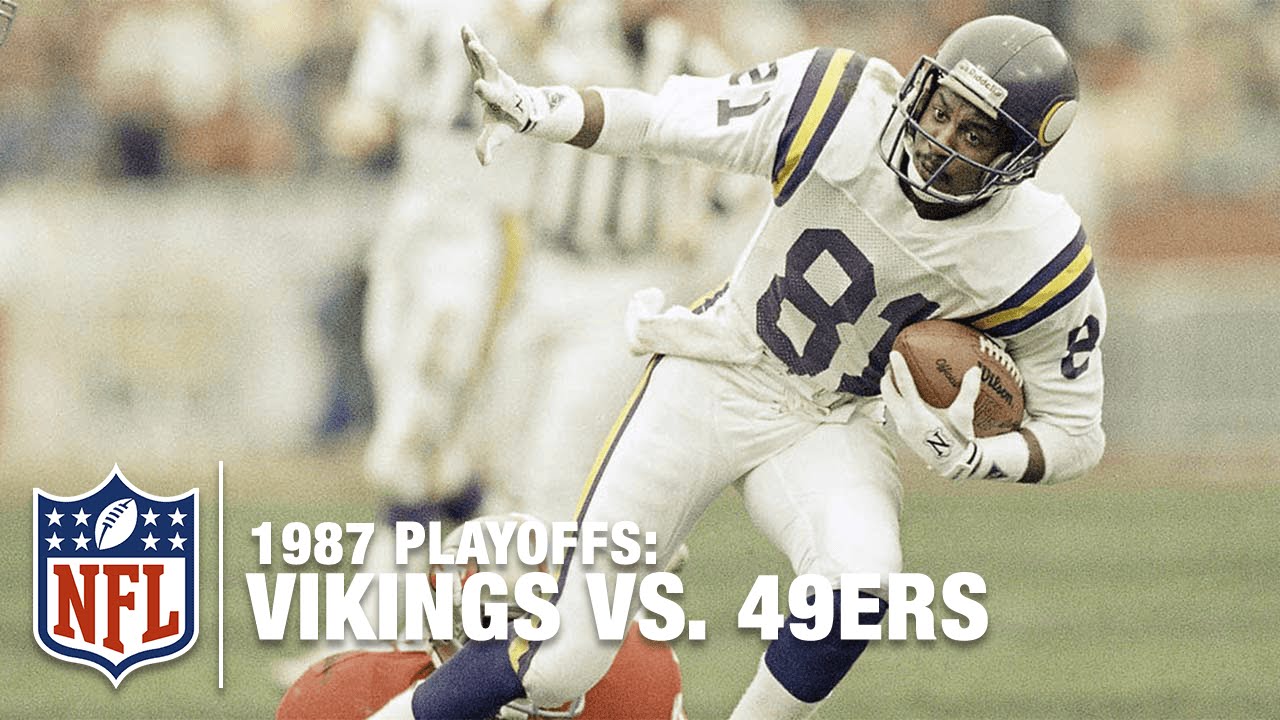 4). 1986 NFC Divisional Playoff The Redskins take down the “Monsters of the Midway.”

The Bears were defending champions and were a dominant 14-2. The Redskins were no slouches themselves at 12-4, but nobody expected what came next.

The Bears offense was being led by Doug Flutie who played fairly well in the first half as the Bears built a 13-7 lead. The second half was a different story as a Flutie interception and Walter Payton fumble helped to do them in as they were beaten 27-20. 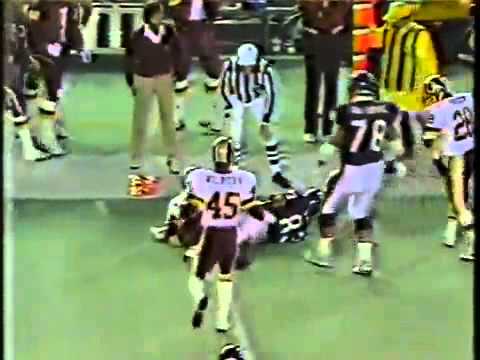 The Saints were the defending Super Bowl Champions; the Seahawks were the first team ever to qualify for the NFL playoffs with a losing record at 7-9. As a division winner though the Seahawks got to host this game.

The Seahawks won this game 41-36, but all people remember about this game is Marshawn Lynch who put the dagger into the Saints comeback plans. He had an epic run as he broke numerous tackles and pushed Saints defenders away. Pure “Beast Mode.” Lynch gained 131 yards on 19 carries, which was his most memorable game as a member of the Seahawks. 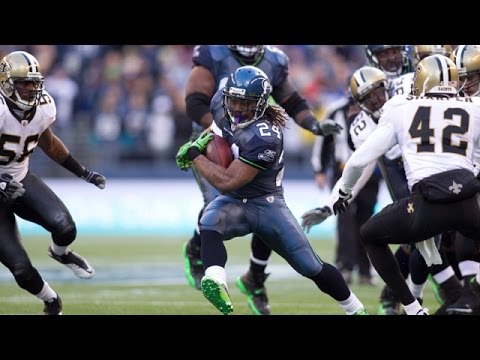 2). 1979 AFC Divisional Playoff Vernon Perry and the Oilers take down the Chargers

This game turned into an epic upset, because of a violent Wild Card battle the Oilers had with the Broncos. The Oilers lost starting QB Dan Pastorini, Star running back Earl Campbell and number one wide receiver Kenny Burrough. The Chargers entered the game at 12-4 and because of the injuries were a substantial favorite.

Vernon Perry who played in the secondary played maybe the greatest defensive game any player has ever played in NFL playoff history. Perry comes up with the four picks, but he also blocked a 26-yard field goal and returned the blocked kick 57 yards, which led to an Oilers field goal. The fourth interception came in the final minute of the game to kill any chance the Chargers had to either tie or win the game. 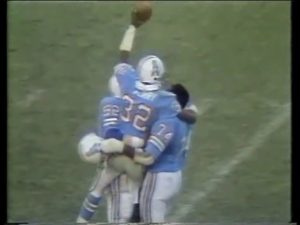 The Jaguars made the playoffs in this only their second year of existence. The Broncos were 13-3. No way the Jags can win this one, right?

The Broncos came out of the game strong scoring two touchdowns to take a 12-0 lead. They did miss both conversions. From there, the upstart Jaguars dominated the game scoring 23 straight points on the way to a 30-27 win. 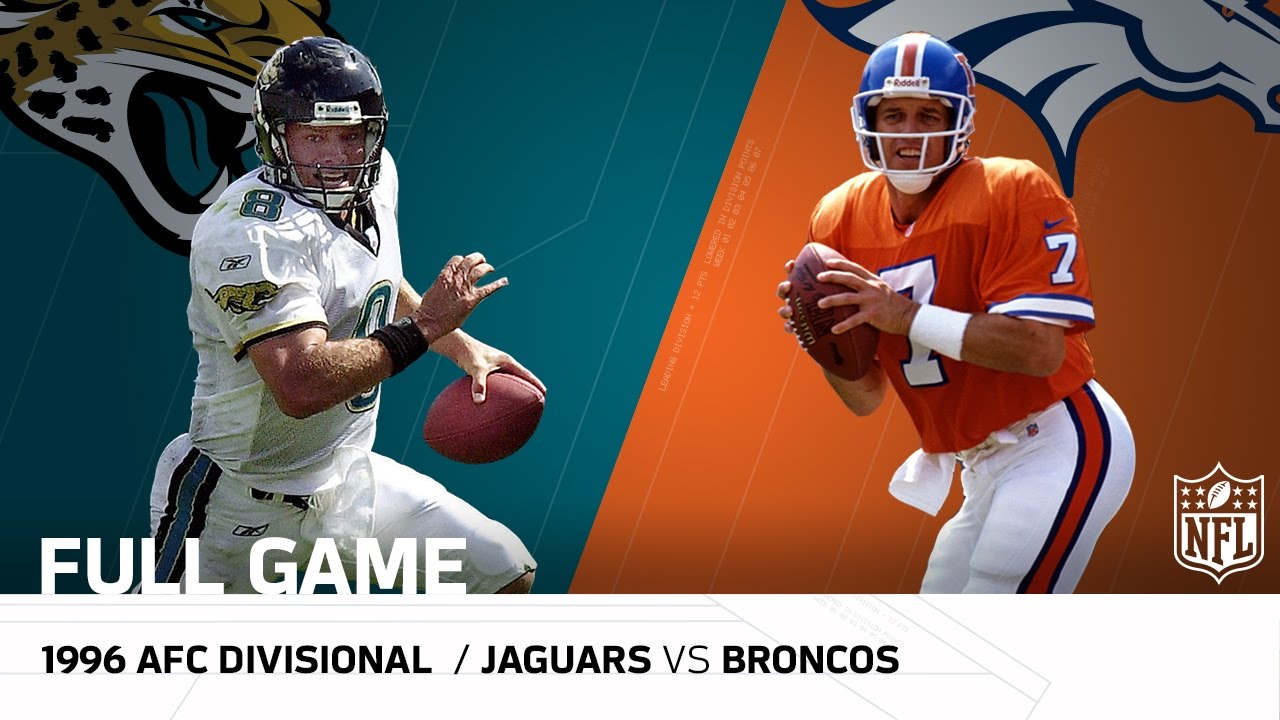