Every year in the NFL, we see a couple successful plays early in the year that take the attention of offensive coordinators around the league. These plays find their ways into a number of other team’s playbooks. This year is no different, plays are making their way through the NFL. But what’s interesting, is which offenses are executing the exact same plays with success, and which offenses are not.

In 2017, Andy Reid emphasized the Jet Motion into his offense. Tyreek Hill’s speed is a major threat, and Andy Reid sculpted a couple of concepts around that. One of those plays that relied on the Jet Motion, torched the Patriots defense in week 1 in front of a national audience. Once everyone saw that, and how successful the Chiefs were running it every week, offensive coordinators implemented the play into their own playbook, even the Patriots copied it.

Here’s the play, Alex Smith hit Kareem Hunt (#27) for a 78-yard touchdown to go up 28-27, in a game the Chiefs eventually took over handily. What’s so nice about this play, is that it works against most coverages. It doesn’t always work to throw it to Kareem Hunt, but there are multiple concepts in here that can work.

It worked against the coverage the Patriots ran here, which was a type of cover 1 pattern match, but also would work versus a cover 2 zone or man, cover 3 zone or buzz mable, and many more.

Here’s the play from the coaches film from that 2017 matchup between the Patriots and Chiefs. Notice Eric Rowe (#25) on the left side of the defense, when safety Duron Harmon (#30), motions down to cover the edge for the Jet Motion, #25 becomes Alex Smith’s read. He ends up taking Travis Kelce (#87) on the deep crossing route, effectively opening up the middle of the field for Kareem Hunt (#27).

Alex Smith has plenty of time because of strong pass protection and hits Hunt with an absolutely gorgeous throw. Check it out. 2018 has been no exception, plays are being copied all the time, but one , in particular,I want to show because if effectively shows how important execution is to an offense. But we have to build up to it to see some of the details.

The second building block is the toss to reverse side of the motion. It threatens the jet motion give with a fake, shifting the defenses to that side, then running it to the opposite side. Take a look at the Packers who ran it this last weekend versus the Jets.

Oh! Look at that! Pre-snap movement (in the form of a jet sweep look) to clear out a side, then run a counter to that side. It worked! HOW ABOUT THAT?! pic.twitter.com/agGUmMOIA8

Aaron Rodgers fakes to the jet motion, then simply tosses it to Jamaal Williams to the reverse side. It doesn’t seem like much, but it give you leverage on the downfield blocks and has substantial success in the NFL. Jamaal Williams actually scores a touchdown on the play, a big part was the threat of the Jet Motion.

Then there’s the play we’ll talk about, building block number 3. The first time I saw this play was in week 14, when Freddie Kitchen dialed it up versus the Panthers, and burnt them twice. It has the jet motion fake, a fake toss to the reverse side, then an underneath give that can be lethal if it’s ran discretely. Take a look at the Browns running it. 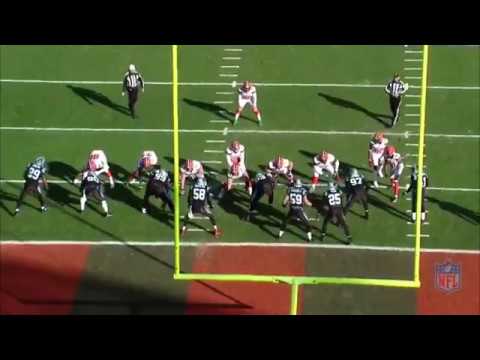 Jet Motion – Fake Toss – Underneath Give

The Browns run it beautifully. The biggest aspect to the play is timing. The jet motion timing is perfect, the toss fake timing is perfect and Jarvis Landry’s timing is also perfect. Baker Mayfield is technically solid on the play, making sure the fake toss effectively splits the defense.

The success of this play depends on how well you can split the defense. The jet motion is supposed to stretch the defense on way, and the fake toss the other way, opening up the field in the middle.

As soon as Baker Mayfield fakes the Jet Motion, the defense looks at the player, seeing if he actually gave it to the WR running across the formation. As soon as they see he doesn’t have the ball, the defense’s eyes go into the backfield. What they see, is the entire offensive line moving in the opposite direction, and Mayfield just finishing the toss. The middle of the defense moves with the toss, and Baker simply gives it to Landry with a split defense.

The play isn’t as easy to run as the Browns make it seem, the timing has to be perfect. Take a look at the Saints and Raiders trying to run it, it has different results. 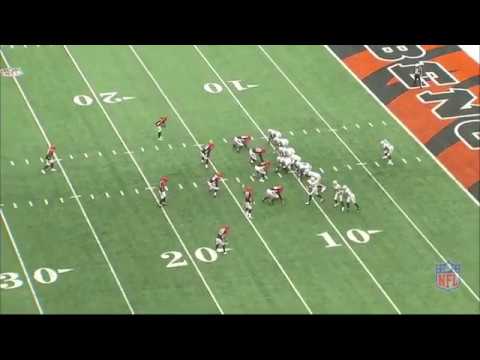 In the Saints clip, Drew Brees doesn’t give a good enough fakes on the jet motion or the toss, and the defense is right there for the give. Also, the Saints try to get extra blocking on the side where the underneath give is going. So they pull their guard with the player that will be getting the underneath give, broadcasting that something funny is up. Because of this, the defense sniffs it out and it actually becomes a turnover for the Panthers.

In the Raiders clip, it seems like the WR doesn’t know the play or remembers that he’s getting a fake give on a jet motion. Instead, he kind of waltzes over to the other side, completely nullifying the fake and obviously doesn’t stretch the defense that direction. Because of that, they simply watch the QB fake a toss, stay at home and the underneath give comes right to them. The defense isn’t split because of the complete failure of the Jet Motion fake.

These are examples that are important to remember when you’re watching your team’s coaching crew. Are they bad play designers? Bad play callers? Or are they bad at getting their offense to execute? Do they have the offensive line to run some of these plays?

Players will often complain about play design, where as a coaching staff will usually place a lot of stock into execution. Both are true, and they need to be balanced. The most beautiful thing about the game of Football, is that it’s so multifaceted. Star players make a difference, but you also need a team and a coach that knows how to use those skill sets.