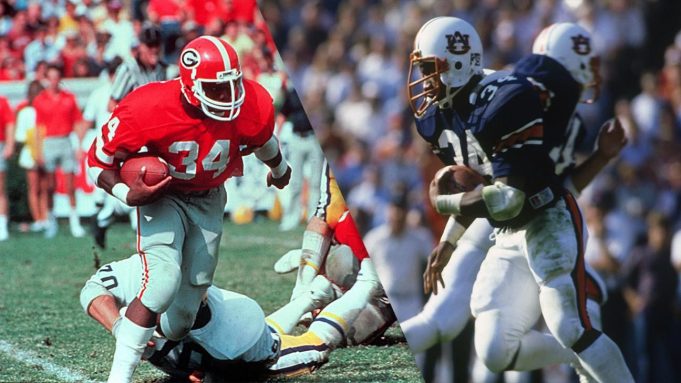 Hutson was truly the first great threat at the wide receiver position whether is was college or professional football. He is known as the father of the the modern pass route, as he created forward offense from his split end position. Hutson led Alabama to the 1934 national championship.

Cannon was a big powerful running back with speed. He also played linebacker and was a sure tackler and one of the best defenders in the country. In his LSU career, he gained 1,867 yards rushing, 522 yards receiving, 965 yards returning kicks and led the Tigers in tackles. He led LSU to a national title in 1958, and he won the Heisman in 1959.

McFadden was one of the most dangerous backs in college football history, he gained over 4,700 total yards and a very solid 51 touchdowns in his Arkansas career.

McFadden won the Doak Walker Award two years in a row, was selected as the Southeastern Conference Offensive Player of the Year by SEC coaches and was awarded the Walter Camp Award, given to the nation’s best overall player.

Spurrier threw for 4,848 yards and 36 touchdowns in his career. He also could run, and rushed for over 400 yards from the quarterback position. He sealed the 1966 Heisman trophy with a game-winning field goal as time expired against Auburn. Spurrier never panned out in the NFL, but he was as good a college QB as you could find in the 1960’s.

He passed for an impressive 10,119 passing yards and 81 touchdown passes in his Ole Miss career. In 2003, he won the Maxwell award as the nation’s top offensive player and finished third in the Heisman voting. More importantly he helped turn Ole Miss football program around , in his time there.

He threw for 2,714 yards and 25 touchdowns in his career, pailing in comparison to others in history. His leadership on the field is what puts him this high. He led Alabama to the 1964 National Championship.

Tommy Casanova is the only player in LSU history to have been selected first team All-American three times.He played free safety and running back in games and excelled at both. Casanova also returned the kicks and punts for LSU. He was literally all over the field. Casanova went on to be a very good player for the Cincinnati Bengals in the NFL.

Bailey was an amazing players on both sides of the ball, producing at wide receiver and defensive back. In 1998, he racked up 52 tackles and three interceptions and added over 1,000 yards of total offense. He won the Bronko Nagurski award as the nation’s top defensive back in 1998.

He was a top running back and a top quarterback. He passed for 30 touchdowns and rushed for 30 touchdowns in his Georgia career. He ran for 2,271 yards and passed for 2,331 yards during that span. In 1942, he won the Heisman trophy and led the Bulldogs to a national title. Frankie was the heart and soul of that Bulldog teams.

He threw for 4,753 yards and 31 touchdowns and ran for 823 yards and 25 touchdowns in his Ole Miss career. Like his NFL career with the Saints, Manning was not surrounded by a lot of talent at Ole Miss. Still Manning made the most of his time as a Rebel, making Ole Miss competitive.

One of the greatest pass rushers in the history of football played anywhere. White was a special; talent no matter what level of football he played. He was an emotional leader on and off the field and was named first-team All American and SEC Player of The Year in 1983.

Bennett racked up a big 287 tackles in his career and added 21.5 sacks. He was a three time All-American and finished seventh in Heisman voting in 1986.

Would be ranked top 5 if he could have beaten Florida. Tennessee was 39-5 with Manning as a starter, making him the all-time winningest SEC quarterback. He threw for 11,201 yards, and a ridiculous 89 touchdowns in his college career.

Unlike his time in the NFL, Emmitt was not surrounded by great players in college. Under these constraints, he still compiled a stat sheet that had over 4,000 total yards and 36 touchdowns. He had an impressive 23 games of 100 yards or more rushing in his college career.

Pat Sullivan was a dynamic quarterback that could run and pass. He threw for a big 6,284 yards and 53 touchdowns as an Auburn Tiger. He also ran for 18 touchdowns in his career. Sullivan won the Heisman in 1971 and was a first team All-American selection.

Derrick Thomas is the all-time sack leader in the SEC, with an impressive 52 QB sacks in his college career. Thomas won the Butkus Award and finished 10th in Heisman voting in 1988. He was a first-team All-American and All-SEC selection.

He played on both sides of the ball and dominated at each position. For example, in an Orange Bowl game against Oklahoma in 1963, Jordan graded out 100 percent at Center and made 31 tackles on defense. He was an All-American and at both positions in his college career.

John Hannah was first team All American in 1972 and won the Jacobs Blocking Trophy as the best blocker in the conference. While it is tough to rank a lineman against other positions, anyone who saw Hannah play would agree that he belongs near the top of any list. Hannah is considered by most the greatest guard to ever play the game of football.

Coach Bear Bryant called Dwight the greatest player he had ever coached. Stephenson is considered one of the greatest centers to ever play the game of football. Stephenson was a part of consecutive National Championships and very nearly 3 straight, but the Tide was robbed in 1977 by voters.

The 6’1″, 220 back was big and fast, making him a nightmare for opposing defenders. He rushed for a big 4,303 yards and 43 touchdowns in his Auburn career. Jackson won the 1985 Heisman and was a two time All-American selection. The legend of Bo Jackson was cut short in the NFL after an injury ended his career. In the end the injury may have cut short the career of Jackson, but it probably made his legend even bigger.

Tebow passed for 9,286 yards and a huge 88 touchdowns and ran for an additional 2,947 yards and 57 touchdowns in his prolific Gator career. Tebow won the Heisman Trophy in 2007, and the Gators won the national title during his freshman and junior seasons (2006 and 2008). Tebow was a great leader and winner in college, those facts can not be denied.

Herschel Walker led Georgia to an undefeated season and a national championship in his 1980 freshman season. Georgia won three SEC titles and went 33-3 in Walker’s three seasons as a Bulldog. He gained an impressive 5,259 yards and scored 52 touchdowns in three years. That is an ridiculous average of 159 yards per ball game.

If you enjoy hearing from the legends of pro sports, then be sure to tune into “The Grueling Truth” sports shows, "Where the legends speak"
Contact us: thegruelingtruth@gmail.com

Living in Loserville: Minnesota Gophers 1989-90 Rewind!Huge Upset over Syracuse with...