No, Joe Burrow is not on this list because his college career was basically one great season. Of course, it was the greatest season in College Football history, but one season will not make this list. Check out the top sportsbooks for betting on college football.

Chris Weinke played quarterback for Florida State starting in 1997; he was 25 years old.

In 1998 Weinke led his team to a 9-1 record and a No. 2 rankings. But, unfortunately, his season ended too soon when he endured a neck injury.

In 1999 he led the No. 1-ranked Seminoles to an undefeated season and a national championship.  He defeated a team called Virginia Tech—who had a quarterback named Michael Vick.

In 2000 Weinke led the nation with 4,167 passing yards and was awarded the Heisman Trophy.  He also went on to win the Davey O’Brien Award and the Johnny Unitas Golden Arm Award.

While he did make it back to the national title game, the Seminoles lost to Oklahoma.

Weinke is the oldest player ever to win a Heisman, and he put up some incredible stats. 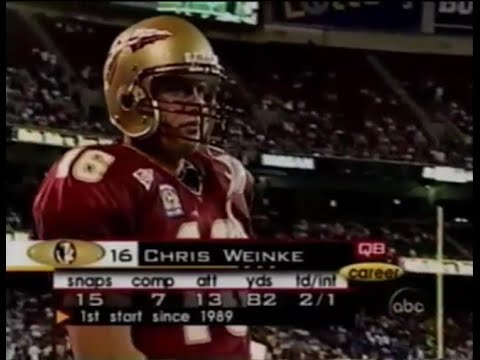 Check out the top sportsbooks for betting on college football

Jim Plunkett was the quarterback for Stanford University in the late 1960s.  Plunkett overcame adversity in his first season at Stanford.  He had to have a thyroid operation which caused him to lose his spot as a quarterback on the team.

His coach moved him to defense, but Plunkett wouldn’t let that stand. Instead, he worked hard to prove that he could play quarterback and eventually earned the starting spot.

Why is he on my list so high?  Not only did he overcome adversity, but he also passed up the NFL Draft to stay in school to be an example for the kids he tutored.

He carried Stanford on his shoulders to the 1970 Rose Bowl and beat the heavily favored Ohio State Buckeyes 27-17.

This guy played like Superman. Of course, now he only played two seasons, but you know why he made my list if you saw him play in college.

Vick led the Hokies to an 11-0 season and a national title game in 1999.  They lost the game, but Vick almost made one of the most amazing comebacks in college history.  The bid fell short, but people knew Vick was for real.

In 2000 Vick had another incredible year, although injuries were an issue.

He left after his sophomore year for the NFL, but his legacy remains.

I picked Vick for this list and at No. 8 because he changed the game.  Vick played like Superman, and it caused others to change what they were doing.  If you have noticed, college football has changed since Vick’s day, which is directly related to how he played.  Did I mention he had played like Superman before Cam Newton did! 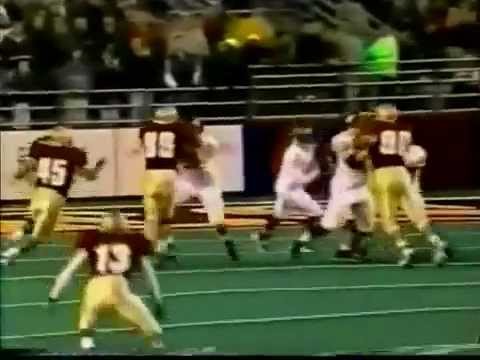 Perhaps the greatest compliment a football player could receive was given to Joe Namath.  Paul “Bear” Bryant said that Namath was the greatest athlete he ever coached.

Namath’s stats weren’t all that impressive, but it was the way he played the game that lands him on my list.  Fearless, confident, and never backing down.  Joe Namath quarterbacked the Alabama Crimson Tide during the civil rights upheaval of the 1960s.

Joe Namath stood up for African Americans against some of his white teammates.  He didn’t back down; he stood for what was right, and for that and much more, he makes my list. Unfortunately, his pro career was never what it could have been because of the knee injuries that nagged him his entire career. Watch him before the knee injuries started at Alabama, and you will realize Namath sadly would have been one of the greatest QB’s to ever play at any level without the injuries. 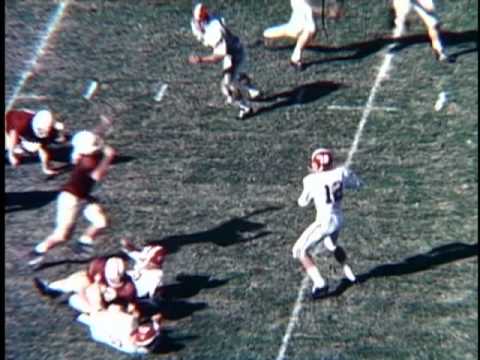 Charlie Ward won the 1993 Heisman as the Florida State quarterback.  He also won the Maxwell, O’Brien, and numerous other awards.

Charlie Ward was also an excellent baseball player.  He didn’t play in college, but the Yankees still drafted him in 1994. Ward was an all-around good guy.  Good student, a good player, and a good citizen.

Ward led the Seminoles to a national championship in 1993 in the Orange Bowl against Nebraska.  The Noles won that game 18-16. Charlie Ward was a great team leader and QB, all-around one of the greatest athletes ever to play college sports. Doug Flutie is  probably most famous for the “Miracle in Miami.”  However, he did quite a bit more at Boston College. The number one achievement was he made Boston College relevant on the national stage.

He was the 1984 Walter Camp Award winner.  He also won the Davey O’Brien Award, the Maxwell Award, the UPI Player of the Year Award, and was the Liberty Bowl MVP in 1983.

Of course, Flutie was also a Heisman Trophy winner, but most people think the reason was because of that famous “Hail Mary” in Miami.  The truth is the votes were already in when Flutie threw that amazing pass.

A small quarterback, he never played that way. Instead, Flutie was an incredible college quarterback and a fierce competitor. He didn’t know how to give up. 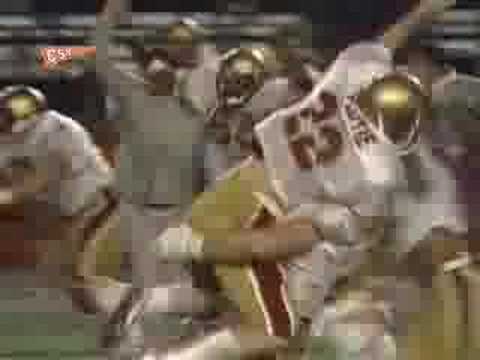 Steve McNair wanted so much to play college quarterback that he turned down a scholarship from Florida because they offered it to him as a defensive back. I think Florida now regrets that decision.

Steve instead chose Alcorn State, a Division I-AA (now FCS) school.  But that is why I picked this guy.  He had a dream, and he went after it.  Even when others told him he couldn’t.

In his senior year, however, he changed the way the game was played. McNair had nearly 6,000 yards, 53 touchdowns, and numerous records. He finished third in the Heisman race.

He finished his career with 16,283 yards, which is a record that still stands today. 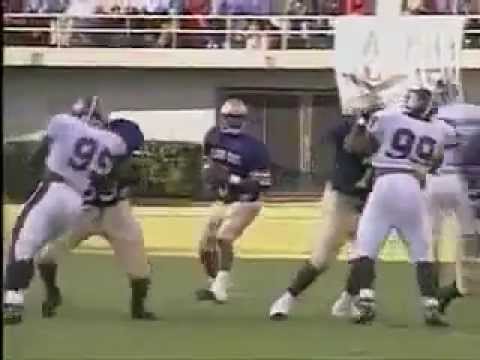 Vince Young was amazing.  We all remember Young’s Texas Longhorns and their epic game for the title against USC. That game showed you what a great college QB Vince Young was; the last few minutes of that game cemented his legend.

A two-time Rose Bowl MVP trophy, the Manning Award, the O’Brien Award, and many other awards were placed at the altar of Vince Young.  He finished second in the Heisman to Reggie Bush, but some think it should have been his.

His stats were impressive, but his ability to run, his leadership by example, and his overwhelming desire to win are what made Vince Young so special. 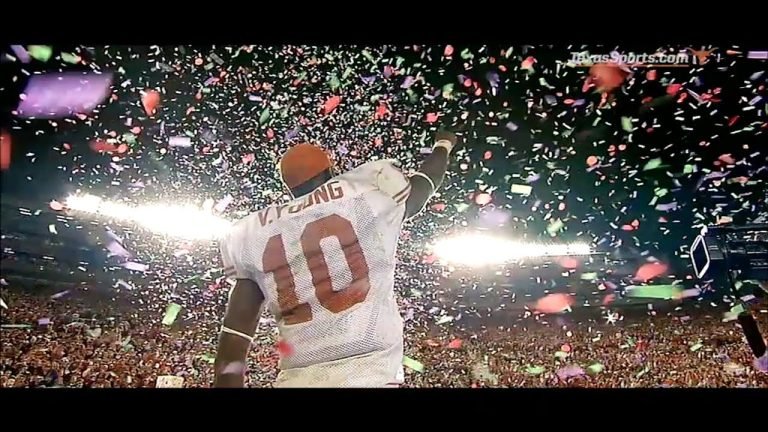 Check out the top sportsbook bonuses for betting on College Football

A remarkable dual-threat quarterback and competitor.

He, of course, was a Heisman finalist three times and won the award once in 2007.  To list every other award he received would take up about 1,000 more words, but in my estimation, he is the most decorated college quarterback of all time.

Did I mention he also led his Florida Gators to a national title in 2008?  He is a proven winner, both on and off the field. Tommie Frazier was an incredible quarterback.  He earned the 1994 and 1995 Orange Bowl Most Valuable Player Awards, the 1995 Johnny Unitas Award, and the 1996 Fiesta Bowl MVP.

Frazier led the Cornhuskers to back-to-back national championships in 1994 and 1995.  These teams are still legendary; the 95 teams are considered by many the greatest ever.

Frazier also led his team to four Big Eight Conference Championships and finished with a 33-3 record overall as a starter. 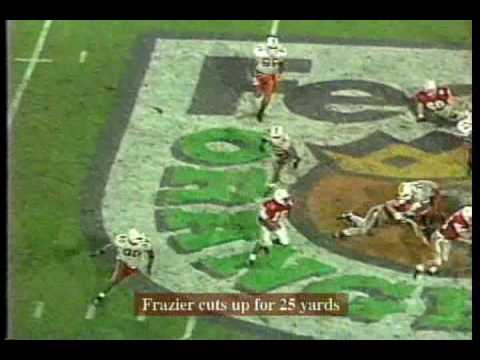