The Top 10 Michigan Wolverines(Football) of All Time

Top 10 Michigan Wolverines of All Time!

The best place to bet on College Football!

As a senior, he was a finalist for both the Outland Trophy and the Lombardi Award. Long was the No. 1 overall selection of the 2007 NFL draft.

Hart amassed a freshman record of 1,455 yards in 2004 and was named the Big Ten Freshman of the Year. Following an injury-affected sophomore campaign, the running back burst onto the national scene with consecutive 14-touchdown seasons. He scampered for 1,562 and 1,361 yards in 2006 and 2007, respectively.

Per the school, he didn’t allow a sack during his final two seasons. As a senior, Hutchinson was a consensus All-American and the Big Ten Offensive Lineman of the Year. 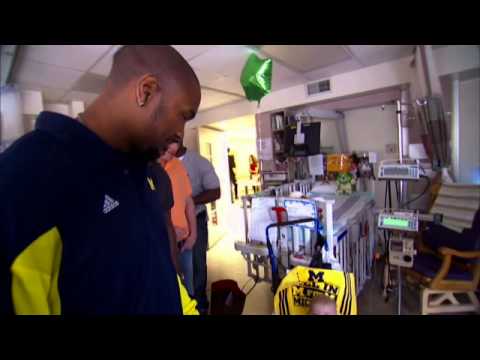 Edwards eclipsed the 1,000-yard mark and caught 10 touchdowns as a sophomore, then amassed 85 catches for 1,138 yards and 14 scores the next year. That was a precursor to his dominant senior year.

In 2004, Edwards racked up 97 receptions, 1,330 yards, and 15 touchdowns, becoming a consensus All-American and finishing 10th in Heisman voting. In addition, he won the Biletnikoff Award, which is given to the nation’s top receiver.

The states aren’t great from 100 years ago, but the one stat that stands out is that Bennie was named a three-time consensus All American, the only Wolverine ever to accomplish that feat. Bennie tossed three touchdown passes during the Michigan Stadium dedication ceremony against Ohio State, a 21-0 victory.

Carter spent all four seasons as the Wolverines’ primary kick and punt returner, totaling 5,802 all-purpose yards. That, along with his 161 receptions, 3,076 yards, and 37 touchdowns, was a school record at the time. Carter posted 50/952/8 and 43/844/8 lines during his final two years—both of which included consensus All-American nods—and grabbed two more top-10 Heisman finishes.

Harmon won the Maxwell Award, AP Player of the Year, and Heisman Trophy in 1940. During that season, Harmon ran for 852 yards and 15 scores, threw six touchdowns, snagged four interceptions, and added two other trips to the end zone while averaging 37 yards per punt.

Howard was a beast, and the iconic Heisman pose will go down in college football lore. A consensus All-American, Howard took home 1997 Big Ten Offensive Player of the Year honors, the Maxwell Award, and Walter Camp Player of the Year honors along with the prestigious Heisman. In just three years, Howard registered 134 receptions and 2,146 yards and scored 37 total touchdowns.

Woodson was named the Big Ten Freshman of the Year in 1995—claimed the Big Ten Defensive Player of the Year; was a consensus All-American; earned the Nagurski, Bednarik, Thorpe, and Camp awards; and hoisted the Heisman Trophy. Not too bad for a player who was primarily a defensive back. On offense and special teams, Woodson was a force, catching 21 passes for 370 yards and three touchdowns, two rushing scores, and took a punt return to the house.