The days keep passing by as fans await the Labor Day match-up between the Florida State Seminoles and the Virginia Tech Hokies. As part of the offseason, we’re doing a countdown that highlights players, games, and specific moments from Florida State football history.

On Tuesday, it was the No. 83 jersey worn by Lawrence Timmons during his time at Florida State.

Today, it’s the 1982 Gator Bowl, where the Seminoles defeated the West Virginia Mountaineers 31-12 and gave head coach Bobby Bowden a victory over his former team.

The 1982 Gator Bowl pitted an unranked Florida State team against the No. 10 West Virginia Mountaineers, who were looking for their highest ever finish in the AP Poll. The Seminoles were 8-3 and ended their regular season with disappointing losses to LSU and Florida. Those losses knocked FSU out of the polls.

The game meant a little extra to Bowden, who coached West Virginia from 1970-75 before leaving for Tallahassee. It was the first time the two programs had ever met on the football field.

Initially, the game looked like it would be an uneventful defensive battle. The teams exchanged field goals early on to make it 3-3 near the beginning of the second quarter.

FSU running back/returner Billy Allen then blew the doors open by returning a kickoff 95 yards for a touchdown and a Gator Bowl record. Fighting the rain and wind that plagued both offenses, Allen made an impressive run across the field to evade defenders and give FSU a 10-3 lead. 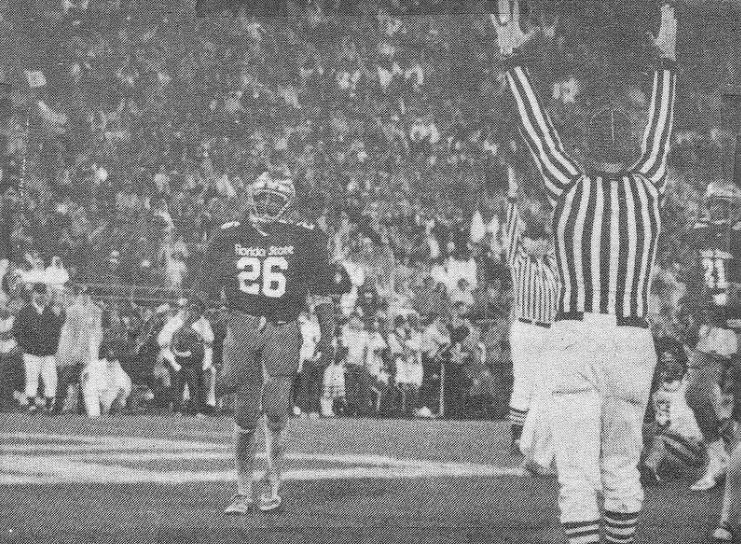 The Seminoles never looked back, outscoring the Mountaineers 21-6 from there on out and capturing Bowden’s second-ever bowl victory at FSU. Tailback Greg Allen led the way offensively with 138 rushing yards and two touchdowns on the day. Defensive back Brian McCrary added two interceptions.

For what it’s worth, Bowden tried to take the spotlight off himself for defeating his former team. He was quoted after the game as saying, “I got no thrill whatsoever in the fact that we beat West Virginia. I am happy because we won the Gator Bowl. I spent 10 years up there and those are good people.”

Still, few would know the relevance of this game at the time. The 1982 Gator Bowl began the current 36-year active bowl streak that FSU claims, even if the NCAA does not officially recognize it due to a vacated 2006 Emerald Bowl. The Seminoles would not lose a bowl until 1996.

Current active coaches are not included in this list. That means don’t ...

On My Mind Monday: How Has FSU Fared After Starting 2-1 in ACC Play?

For the sixth time since joining the ACC in 1992, Florida State ...

FanDuel Bonus
Bet One, Get One: We’ll match your first bet placed up to $250 in free bets
T&Cs apply
9.4/10
Go to Sports Betting Bonus Comparison
Latest News
Top 19 Heavyweights of all time
Top 20 Everybody has differing opinions on almost ...
Top 11 Dynasties in NFL History
(Photo Courtesy of Boston Sports Desk) “Dynasty” what ...
NFL Week 3 49ers vs Broncos: Odds, Tips and Predictions 9/25/22
Odds for 49ers/Broncos– 9/25/22 49ers/Broncos How To Watch ...
Lions lineup: Jackson, Cominsky sidelined, others uncertain for Sunday
On Sunday, the Detroit Lions will play the ...
Bingo Treasures to launch, partnering with Jamul Casino
On September 23, Video King announced that Bingo ...
Our Latest YouTube Videos