Hood quietly ran for 1,463 yards and 17 TDs, averaging 6.7 yards per carry. UNC may win the ACC Coastal again, and Hood is its best player.

Chubb rushed for over 100 yards in each of the 14 games he started over two seasons before a serious knee injury ended his season against Tennessee last October. The 228-pound Chubb averages a ridiculous 7.4 yards per carry in his career, and while there has been plenty of skepticism all offseason, it appears that he might be ready to return to the lineup for Georgia’s opener against North Carolina. If fully healthy and back up to speed, he’s capable of making an argument as the best running back in the country.

A powerful 230-pound back with quick feet, Freeman ran for 1,837 yards and 17 TDs and averaged 6.5 yards per carry, and he also caught 26 passes for 348 yards. Freeman is the most underrated back in college football, to contend Oregon needs to have a better season than they did last year.

Rosen started all 13 games for UCLA as a true freshman. Rosen completed 60 percent of his passes for 3,668 yards, 23 TDs and 11 INTs, looking like a future star who could go on to be a top NFL draft pick in a couple years. Rosen is poised for a big season, and a possible run at a PAC 12 title which would make him a contender. The senior doesn’t have Laquon Treadwell to throw to or Laremy Tunsil to block for him anymore, and he also has one of the nation’s toughest schedules. If Ole Miss survives that schedule, Kelly has plenty of opportunities to insert himself into the Heisman conversation.

A terrific fit for what Urban Meyer’s offenses traditionally have done, Barrett threw for 2,834 yards and 34 TDs and 938 yards and 11 TDs in 2014 before getting hurt against Michigan. He’s capable of rebounding and become the team’s star again. 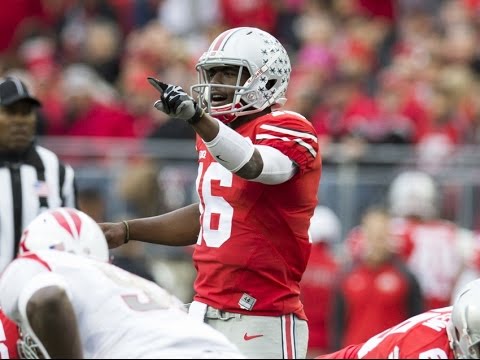 Mayfield who threw for 3,700 yards and 36 TDs with a 68.1 percent completion rate, while also rushing for 405 yards and seven TDs last season. Mayfield fit perfectly in the offense under coordinator Lincoln Riley, and he passed RB Samaje Perine as the Sooners’ top Heisman candidate. With a weak Big 12 Mayfield is poised for a run at college football’s biggest prize.

Cook ran 229 times for 1,691 yards and 19 TDs and caught 24 passes for 244 yards and a TD, averaging 7.4 yards per carry. The 213-pound junior is a big-play machine — 13 runs of 30-plus yards — with rare burst through the hole, and he’s so difficult to bring down in the open field. Imagine what he can do if he’s healthier and running behind a more seasoned line. He could very well lead the Seminoles back to the college playoffs. Fournette had 300 carries for 1,953 yards and 22 TDs, averaging 6.5 yards per carry at 230 pounds. Few backs in recent history have been able to match his combination of power and speed. Add to that LSU’s talented roster makes him one of the early favorites.

Watson bounced back from a torn ACL as a freshman to throw for 4,104 yards and 35 TDs and run for 1,105 yards and 12 TDs in 15 games, guiding Clemson to a perfect regular season and throwing for 405 yards and four TDs in the national championship loss to Alabama. If Clemson gets back to the playoffs he has as good a chance as anyone to win the trophy. As a sophomore, he set the FBS single-season all-purpose yards record — previously held by Barry Sanders — with astonishing production in multiple ways: 2,019 rushing yards, 645 receiving yards, 28.9 yards per kick return, two return TDs, 13 offensive TDs, two passing TDs. McCaffrey is a phenomenal pure running back, an excellent receiver and one of the best kick returners in the country. His record breaking season should have won him the Heisman last year, my guess is he gets it this year.