People often talk of the economics of boxing and how sticky it is. There is some truth to that, but there is a constant, tried and true way to keep the fans happy while also getting everyone paid: pitting the best with the best without ballyhoo on the petty.

Keith “One Time” Thurman (27-0, 22 KO’s) versus Danny “Swift” Garcia (33-0, 19 KO’s) is just about that. I say just about because this welterweight showdown adds clarification to the muddied 147-pound scene and is not some end-all-be-all showdown for the division’s crown in the vein of Ray Leonard versus Tommy Hearns. It is, however, an excellent scrap between two top-rated men in their primes, which is reason enough to be excited. Rarely do we get such a treat but PBC can chalk two off now. The first was a back-and-forth battle between Keith Thurman and Shawn Porter.

Further reason to tune in is how evenly matched these participants are. Betting odds have Thurman a slight fight favorite in the over/under, labeling Keith Thurman at -200 and Danny Garcia +160.

All we can hope for as fans is that the fight meets, or preferably, exceeds expectations. This is going to be shown on free television. It is essential to the sport’s growth that it performs well.

PBC has once again made good use of the preliminary bouts by matching Erickson Lubin (17-0, 12 KO’s) with Jorge Cota (25-1, 22 KO’s). Cota is relatively unknown but his resume says he can bang a bit. Lubin has looked like a future player in his latest outings.

Andrzej Fonfara (28-4, 16 KO’s) versus Chad Dawson (34-4, 19 KO’s) is an interesting crossroads matchup. Both men have recently been upset by lesser-knowns, though Dawson’s loss to Karpency had lots of people whispering that the end is near.

Sergey Lipinets (11-0, 9 KO’s) continues his upward trajectory against Clarence Booth (14-2, 7 KO’s). Booth has always heard the final bell. I wouldn’t bet against Lipinets being the first to change that.

Other fights include: David Haye versus Tony Bellew in an overhyped mismatch. Bellew didn’t convince many he was one of the best light-heavyweights in the world after falling to Adonis Stevenson. He hasn’t proved a top-flight cruiserweight either. Here he is, though, fighting it out in a class higher, with a man who once proved that he deserved a spot among the big boys. Credit to the hype men for this bout.

Prospect watch: Roman Andreev (18-0, 13 KO’s). Andreev is a quick-hitting aggressor from Russia who, like many of his countrymen, hasn’t fretted too much with soft opposition. His next opponent is a solid stay-busy fight, but one that should highlight his ability. 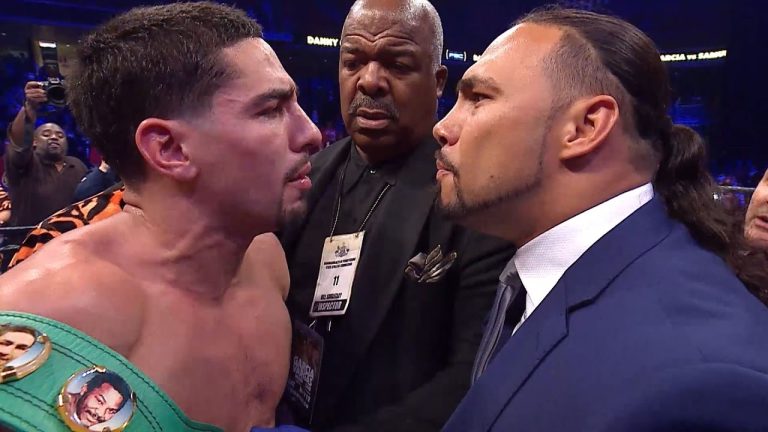 Best of the Best: Thurman vs. Garcia Preview | SHOWTIME CHAMPIONSHIP BOXING on CBS