The Grueling Truth - Where Legends Speak / The Weekend that Was: Champions Defend Belts Against Tough Challengers

The Weekend that Was: Champions Defend Belts Against Tough Challengers

Another weekend of quality fights

The weekend that started on September 23 saw a set of competitive title defense fights. We saw Jorge Linares defend his WBA Lightweight and Ring title against Luke Campbell in California, as well as Joseph Parker defending his WBO World Heavyweight belt against Hughie Fury in England. Oscar Valdez Jr. managed to keep his WBO World Featherweight title against Filipino contender Genesis Servania in Arizona, and Yunier Dorticos decisively won over Dmitry Kudryashov in the World Boxing Super Series in Texas. I highlight three fights that stood out for their entertainment value.

Valdez vs. Servania was easily one of the most dazzling fights of the weekend, a fight characterized by all the ingredients of a professional boxing bout, complemented by personal stories that make boxing truly the sport of underdogs. Valdez, a skilled former Olympian from Mexico, traded power punches with Filipino challenger Servania, who flew from the other side of the world with an undefeated professional record, for the entire 12 rounds. Both boxers dropped each other in the early rounds, and went the distance with heated exchanges that won over the pro-Valdez crowd at Tucson’s Convention Center.

With a four-year amateur record, Valdez was visibly the more technically skilled boxer, but Servania was physically tough, delivering the first knockdown of the bout. The 31-year-old Filipino threw a straight right hand that caught the 26-year-old Mexican as he was moving away from the ropes in the first round. Valdez responded with a powerful left hook to Servania’s chin, dropping the Filipino in the fifth round. 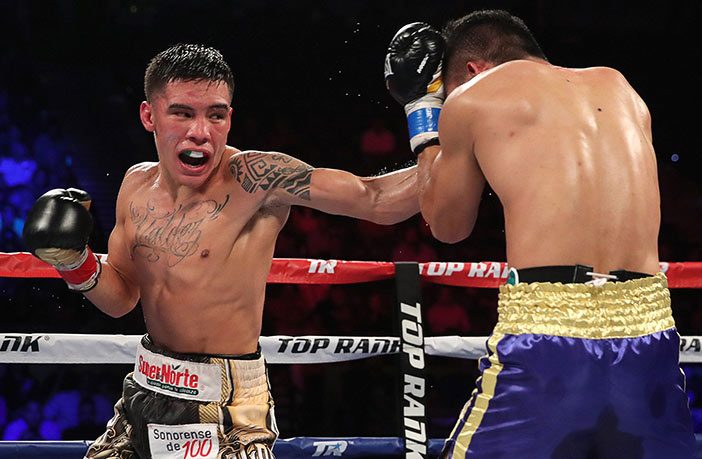 The match was also a classic boxing story. A talented Mexican boxer returns to the city where he spent his childhood, and openly dedicated his fight to the “Dreamers” as well as his home country, which had just experienced two devastating earthquakes. Valdez was reportedly anxious over fighting in his home turf where his mother and relatives still live, but delivered a hometown victory that he had promised when he first fought in Tucson in 2015. Servania, who now trains out of Kanazawa, Japan, came from humble beginnings in his native Bacolod City in the central Philippines. In his US debut, he had to overcome the disappointment of his long-term trainer unable to fly to the US over visa issues, and rose above a pro-Valdez crowd to show that he was a worthy challenger to Valdez. The judges’ scorecard all gave the fight to Valdez, with two cards giving the Mexican a wide lead. But Compubox statistics showed the fight was much closer than judges thought. The ultimate result was fair but the cards did not give justice to the tough challenge that Servania gave to the hometown champion.

Kudryashov is also known as “The Russian Hammer”, and came into WBSS as a challenger to be reckoned with. But on Saturday night, the imposing Russian fighter whose 21 victories all came by way of a knockout, was neutralized by the slicker Cuban boxer. Dorticos knocked down Kuryashov with a powerful straight right hand, forcing an end to the bout in the second round. Dorticos, whose ringside supporters included fellow Cuban boxers Guillermo Rigondeaux and Erislandy Lara, beat his chest then raised his arms in victory as he moved to the semi-final round of the series.

Dmitry Kudryashov (right) was overpowered by Yunier Dorticos (left) in the second round. Photo by Ringstar Sports.

The first round started slowly with both boxers feeling each other out. Dorticos started to throw authoritative punches in the last 10 seconds of the round. The pace picked up in the second round with more punches traded. At one point, Dorticos had Kurdyashov against the ropes with jab-right hand combinations before both returned to the center of the ring. Dorticos’ winning moment came after Kudryashov missed a left hook and a follow up jab, giving the Cuban the opening to throw the perfect right hand that delivered his KO win. Defecting in 2009, Dorticos is a product of the famed Cuban amateur boxing school and on September 23, he did his countrymen proud.

Linares has fought in four continents and vanquished 43 foes in 46 professional bouts. But in recent years, he has gained the reputation of being the conqueror of British fighters. On September 23, Linares enhanced this reputation, defeating Campbell, a 2012 Olympic gold medalist, in 12 rounds of tough boxing. He established his mark early in the match by knocking down Campbell with a right hand in the second round, and went on to win the fight by a split decision. Linares held on to this title and moved closer to a big fight possibly with Mikey Garcia or even Terence Crawford.

Luke Campbell (right) overcame a 2nd round knockdown and competitively challenged Jorge Linares (left) for his belt. Linares prevailed in a split decision. Photo by the Daily Mirror.

What made this fight interesting was the way Campbell overcame a slow and terrible start, and became once again competitive in the middle rounds, disrupting Linares’ rhythm and looking like he was about to snatch Linares’ belt. Campbell’s recovery exposed Linares’ flaws and raised questions over the Venezuelan’s ability to withstand Garcia’s power and skill. In addition, Campbell notably overcame a personal tragedy and delivered a strong performance that is worthy of another shot at a title fight. We now know that Campbell’s father, Bernard, passed away two weeks before the Linares fight, a tragedy that he purposely kept secret so that the opposing camp could not use the information against him. Linares came out the victor in this close contest, but for rising above adversity, Campbell was also a winner in his own right.