The Grueling Truth - Where Legends Speak / Turn and Burn: Reflections from the 2017 IBHOF Induction Weekend-Part Two

Turn and Burn: Reflections from the 2017 IBHOF Induction Weekend-Part Two

The fights at Turning Stone

Not many vegetarian options on the menu at the Turning Stone’s Emerald Restaurant, so I went with the grilled cheese, double order of fries, and my own personal little pot of diner-quality coffee. Little did Len, Steven, and I know that Regis Prograis and his team were having their pre-fight meal there at the same time which I didn’t learn until the following day. After Steven got his traditional photo taken with the leggy and befeathered Turning Stone showgirls, we found our seats in the event center and settled in for a night of Showtime boxing.

The proceedings kicked off with a four-rounder between a pair of local cruiserweights. 0-4 Damien ‘Big Baby’ Lewis from Niagara Falls shot holes in the battle plans of Syracuse’s Lawrence ‘Bulletproof’ Gabriel (1-1) by working his way inside Gabriel’s considerable height and reach advantage, coming up from a crouch with hooks and straight rights while avoiding the few uppercuts thrown in the hopes of halting his advance. I had Lewis winning rounds two through four and one judge agreed with my assessment but the other two scorekeepers put an understandably cranky (and still winless) ‘Big Baby’ down for a nap with a majority draw.

Thirty-nine-year-old Jaime Barboza of Costa Rica consistently dropped his hands and missed with wild haymakers in his middleweight clash with Nick Brinson, who went into the contest having lost three of his last five fights with three of his four total losses coming by knockout, including one to Andre Dirrell. Nevertheless, he made effective use of his fast hands, sitting down on most of his high volume of punches en route to a 6th round TKO victory, his nineteenth. “Easy one, Nick,” someone a few rows behind me screamed. Easy for you to say from the comfort of your bleacher seat.

If Francy Ntetu, fighting out of Canada by way of the Democratic Republic of the Congo, hopes to make a name for himself in the talent-laden light-heavyweight division, he has his work cut out for him. Coming off a stoppage loss (his first of any variety) to a legitimate threat in David Benavidez at Barclays Center on the Keith Thurman vs. Shawn Porter undercard nearly a year ago, Ntetu was given a confidence-building opportunity against 12-6-1 Brian Holstein who had lost his last two bouts, both regional title fights back home in Ohio. True to his nickname, Holstein rushed in repeatedly like ‘The Bull’ that he is, leading the charge with his head which made an inviting mark for Ntetu to aim for. Which he did, eventually. A straight-up boxer with little to no inclination toward head movement, Ntetu has other demerits on his report card in the areas of backward motion, an inactive jab, and an unseemly reliance upon single power shots. A rare combination unloosed by Francy in the fourth round sent Holstein face first into the corner turnbuckles on both knees, resulting in a technical knockout.

2016 Olympian Charles Conwell, on the other hand, exhibits proficient technical skills indicative of his extensive amateur pedigree. The eleven-time National Golden Gloves Champion from Cleveland was featured next in a super-welterweight showdown with Jeffrey ‘The Prototype’ Wright, looking for his third win in the paid ranks after suffering a first-round defeat at the Rio Summer Games to Vikas Krishan Yadav from India. With his guard held high, picking off Wright’s punches effortlessly, Conwell went to work on tearing apart ‘The Prototype’ with a concentrated body attack. Conwell kept his composure after a first-round knockdown and didn’t needlessly rush in for the kill. Rather, one particularly wicked body shot caused Wright to take a knee in the second and another brought about a delayed-reaction flop to the canvas seconds later. 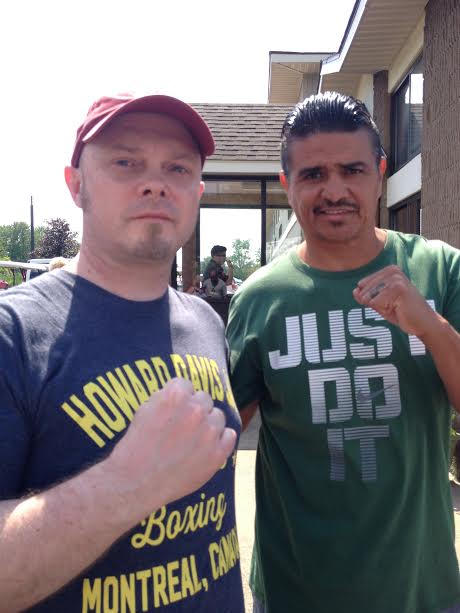 A six-man flag-waving, soccer-chanting cheering section boisterously heralded the ring arrival of heavy-handed welterweight Kerman Lejarraga who was making his American debut, all 21 of his previous career fights (each one a win, 17 by KO) occurring in his native Spain. 13-1 Jose Antonio Abreu (who benefitted from no such nationalistic ribaldry this night) was fighting for only the second time outside of the Dominican Republic. Abreu waltzed drunkenly across the ring courtesy of a Lejarraga right hook in the second round and was helpless to stop the subsequent onslaught, prompting the stoppage by referee Mark Nelson.

The 10:30pm start time of the ShoBox: The New Generation broadcast coupled with the four abruptly terminated performances thus far brought about a 40-minute gap in the action during which Len, Steven, and I loaded up on drinks and snacks and went down to the security checkpoint to meet up with Rick who had just come from the Friday Night Fiesta.

Sergio ‘Maravilla’ Martinez escorted Jon Fernandez into the Turning Stone ring for the first fight of the televised triple-header. Co-promoted by Martinez and Lou DiBella, Fernandez carried a perfect 12-0 record into the evening and hoped to bring win #13 back to Bilbao, Spain which is also the hometown of Kerman Lejarraga. Juan Reyes’ left eye was peppered by incessant right hands thrown by Fernandez, swollen by the end of the first round and cut in the second. An overhand right put Reyes flat on his back as though he had been taken out by a sniper from the rafters. To his credit, Fernandez showed great humility and empathy by choosing not to celebrate his highlight-reel knockout with his vanquished foe lying unconscious for a nerve-racking minute or two but immediately checking on Reyes’ well-being instead. 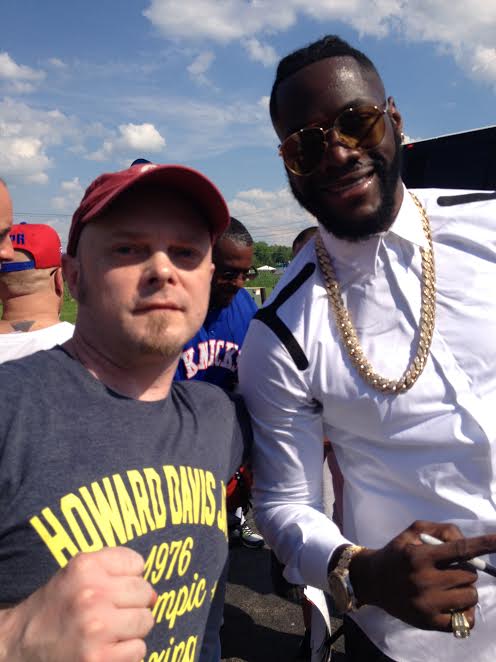 Desmond Nicholson, fighting for the first time since a majority draw with Immanuel Aleem eleven months earlier, was dropped in the first round by Steve Rolls and, confusing the ten-second warning sounded by the wooden clapper for the end of the round, began walking back to his corner with “protect yourself at all times” far, far away from his thoughts. Rolls gifted Nicholson with a proverbial get out of jail free card by not pressing the advantage over his disoriented adversary and allowing him back into the fight to the point where Desmond had him trapped against the ropes in the third, firing away but unable to finish his man. An ebb and flow struggle continued for the remainder of the bout with the question being could either fighter maintain the edge or close the show? The answers were ‘not for long’ and ‘no’ and the ringside judges rendered their collective verdict in favor of Rolls by split decision. He improved to 16-0 at the expense of Nicholson’s second career defeat against 17 victories and the aforementioned draw.

I had first gotten to see Regis Prograis on the Thurman/Porter undercard (the same bill which featured Francy Ntetu’s TKO loss to David Benavidez) when he wore his werewolf mask into the ring then won the NABF Super-Lightweight Title with a fourth-round stoppage of Eduardo Florez. ‘Rougarou’ (named after a mythical Cajun swamp monster) hails from New Orleans but fights now out of Houston, Texas. He defended his belt against Wilfrido Buelvas with a first-round body shot knockout in Biloxi, Mississippi in February and put in yet another early night at the office this evening by making shockingly quick work of previously 23-0 (19 KOs) Joel Diaz Jr. Prograis’ straight left down the pike simply couldn’t miss and was responsible for a grand total of four knockdowns in the second round, two of which caused Diaz to tumble backwards ass over teakettle. Just like that, it was all over. ‘Rougarou’ added another victim to his body count, now 20-0 with 17 wins inside the distance, and put the entire division on notice: Terence Crawford, Viktor Postol, and Adrien Broner specifically.

The destructive firepower of Jon Fernandez and Regis Prograis brought the broadcast to an abrupt conclusion. Rather than exiting the building at approximately 1:30am as I had been dreading, I was walking back to my car beneath the light of the full moon right around midnight.

You know how the Lon Chaney Jr. lycanthrope rhyme goes. “Even a man who is pure at heart and says his prayers by night may become a wolf when the wolfsbane blooms and the moon is full and bright.”

Once again we find ourselves at the doorsteps of a can't-miss bout ...