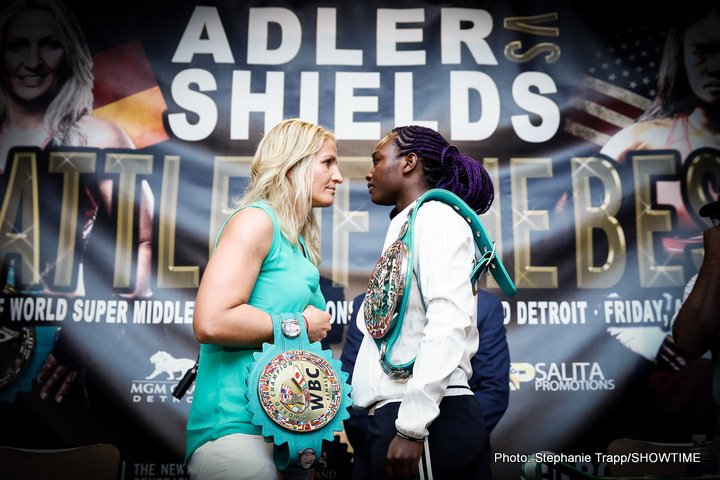 Two-time Olympic gold winner Claressa Shields challenges WBC super middleweight title holder Nikki Adler in Detroit on August 4, in what is boxing’s biggest events, if not in purse, but in significance.

With just three professional fights to her name, Shields is aiming to win her first title, while Adler, an undefeated fighter from Germany, is putting her title and undefeated record on the line by defending her title in enemy territory. Theirs will be the main event to be televised over Showtime. It is a rare moment that could change the future of women’s boxing.

Shields’ road to a title fight came by way of a successful, high-profile amateur career and three previous professional fights where she dispensed of her opponents in the first few rounds. On paper, Adler is her toughest challenge to date.

“I’ve known about Nikki Adler since I was 17, when I first had the goal to turn professional,” Shields said in a press conference. “I looked up all the women who were ranked No. 1. I don’t really care about No. 2s. Everyone that’s here knows that. I looked her up (and other women) and I said, ‘I can beat them, I’ve just got to be in really good shape.’”

Born in Croatia but fighting out of Germany, Adler is 16-0 and is the reigning WBC super middleweight title holder. This title defense is her first fight in the US and just her second fight outside of Germany in her eight-year career. “I’m very happy to be here. I’m really looking forward to facing her. It doesn’t matter where we fight — in America or Germany — I’m very courageous. I’m tough, and I’m not afraid to come to America to box,” she said after her open media workout in Detroit. 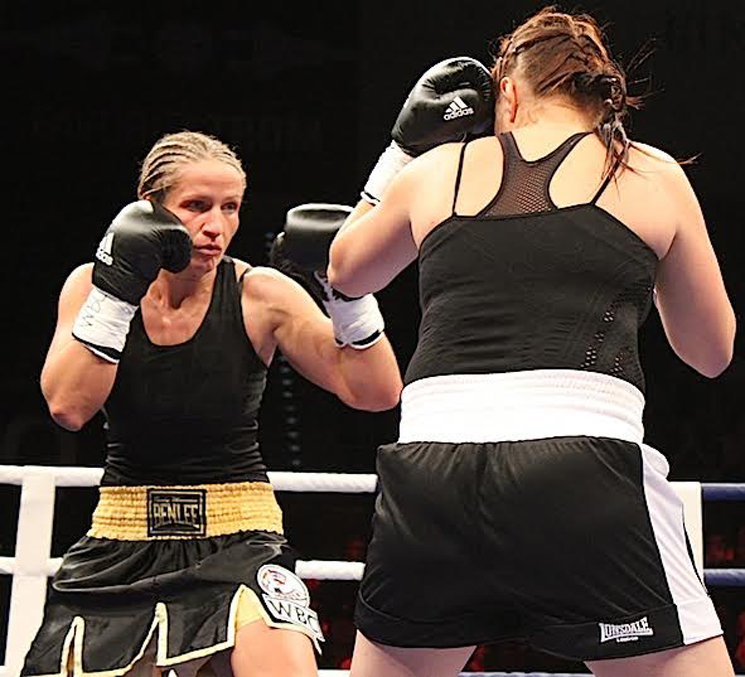 Nikki Adler has a 16-0 record and is the current WBC super middleweight title holder.

Szilvia Szabados, who has been in the unique position of having fought both boxers, thinks the fight will go the distance, but with Shields would be at an advantage because she is fighting in her hometown. “It will be a good match because both of them have the same power and technique,” she wrote in an email. She believes that the difference lies in which boxer is better conditioned and can go the full 10 rounds.

Szabados fought Shields in Detroit in March 2017 but lost via a referee stoppage in the third round. She fought Adler in 2015.  In an earlier interview, Szabados noted that Adler was the toughest opponent of her career. They went the full 10 rounds with Adler winning by unanimous decision.

Adler’s title defense in Detroit signals increased interest among female European champions to fight in the US, where women’s boxing has stagnated over the absence of opportunities and low purses, prompting veteran professionals to cross over to MMA.

At ringside at the Detroit MGM Grand on Friday will be Christina Hammer, the reigning WBC and WBO middleweight titleholder, who was invited by Showtime to the bout. Also from Germany, Hammer has a 21-0 record and is reportedly being eyed for Shields’ future fights. In her Instagram post, Hammer wrote, “I want a fight against her (Shields). This fight is coming.”

On August 5, another US Olympian will fight her professional bout in Los Angeles. Mikaela Mayer, who was on the same Olympic team as Shields in the 2016 Rio Olympics, signed up with Top Rank promotions in July and is scheduled to fight on the undercard of Vasyl Lomanchenko’s title defense against Miguel Marriaga. Mayer joins a list of former Olympians who have gone pro in the last two years, including Shields, Marlen Esparza (US), Katie Taylor (Ireland), Nicola Adams (UK), Savannah Marshall (UK), and Natasha Jones (UK). Former Olympian Mikaela Mayer will fight in her pro debut in Los Angeles on August 5.

Mayer is fighting in her amateur weight of 132 lbs, although her opponent has yet to be announced. She trained with the US boxing team in Colorado Springs and wrapped up her training camp in Los Angeles.

In going pro, Mayer noted the change in women’s boxing.  “Things are changing for Claressa and for other women,” Mayer told USA Today. “People are seeing what women’s boxing has to offer, and I want to be a part of that. I want people to see that elite women can compete with the best, can put on a show.”

Previous article
« Klitschko Retires Rematch with Joshua Off
Next article
The People vs. Vontaze Burfict »

Say what you will about Claressa Shields. Staunch supporters and internet trolls ...

It’s not exactly a well-kept secret that Claressa Shields is adrenalized ...