The Grueling Truth - Where Legends Speak / Saunders Betting Favourite to Beat Andrade, but Does He Deserve to Be?

Saunders Betting Favourite to Beat Andrade, but Does He Deserve to Be?

WBO world middleweight champion Billy Joe Saunders crosses the Atlantic for the 27th bout of a glittering professional career and latest defence of his title. Standing in the opposite corner will be fellow undefeated combatant Demetrius Andrade.

The winner of this fight has split opinion amongst followers of the noble art but there’s no doubt this will be the toughest test of each boxer’s career so far. Who will come out on top? Bookmakers think they know and traders at bet365 have Saunders as favourite in the early boxing betting.

Does the Englishman deserve their backing? Let’s look at his CV… 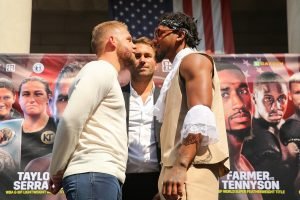 29-year-old Billy Joe Saunders made his professional debut with an eye-catching TKO win over Hungarian Attila Molnar at the National Indoor Arena, Birmingham in early 2009. It didn’t last long but those in attendance were convinced they had witnessed the birth of a future star.

They were proven to be correct when Billy Joe captured his first title two years later, out-pointing Gary Boulden in front of an appreciative Wembley Arena audience. Few fighters follow the traditional route to the top these days and Saunders probably doesn’t get the credit he deserves for doing so, but the Londoner has passed every test put to him along the way.

Winning the Southern Area, he then picked up British, Commonwealth and European straps, beating Chris Eubank Jnr with a split decision points win at the tail-end of 2014 to complete his dominance. That cheer over Eubank may have been closer than many expected but Saunders took confidence from the result, beating Andy Lee next time to realise a lifelong dream and be crowned champion of the world.

He may have made his rise to the top look easy, but it hasn’t been all plain sailing out in front for the Hatfield native. There was a year between him winning the title and making a successful defence and a points win over little-known Artur Akavov didn’t do much to inspire fans.

Saunders roared back to form when beating New Yorker Willie Munroe Jr on the scorecards and has never looked better than when easing to victory over Canadian David Lemieux, beating the Montreal man in front of his own fans, taunting him in the process.

Travelling to an opponent’s backyard has never been a problem for Billy Joe and if the money is right he’ll be more than happy to take his show on the road. That’s refreshing in a time when many fighters, particularly protected champions, refuse to take risks.

Will the champion make another successful defence of his crown and move towards the winner of Golovkin – Alvarez? The 8/13 available to punters suggests so, Demetrius Andrade chalked up at 6/5. Each of the favourite’s last four fights have been won on points and a fifth on the bounce appeals to those eager for their stake money to work a bit harder.