Porter steps closer to an even tougher test

On Saturday night, in front of 13,058 fans at the Barclays Center in New York, former welterweight titleholder “Showtime” Shawn Porter claimed a portion of the welterweight title, defeating former two-division world champion Danny “Swift” Garcia in what was a back and forth scuffle.

Both fighters started out cautious, with Danny trying to establish the jab and porter trying to counter over the top of it. Garcia landed big right-hand to close the round.  The action picked up in the second with Porter trying to feint and use his foot speed to offset the timing of Garcia, while Garcia landed some good jabs of his own and some good left hooks.

Garcia, 30, who hasn’t fought since stopping the rugged Brandon Rios back in February, had a good third round. The Philadelphia native landed a huge right hand, which he followed up with some thunderous left hooks that seemed to momentarily stun the Ohio native.

After a few back and forth rounds, Porter’s athleticism really started to show as he began using his hand and foot speed to get on the inside of Garcia. Porter would momentarily stun Garcia in round four with a left hook of his own.

This title means a lot to me. It meant a lot to boxing and I wanted to be a part of that.”

After a slow fifth round, the action picked up in the second half of the fight.

Porter, also 30, continued getting on the inside of Garcia, landing some good right hands and forcing the former champion to tie up. Garcia would come back strong, connecting with some jabs and body shots, and a good right-hand counter as Porter tried to close the gap.

“I knew he was going to be accurate.  The game plan for me was to be accurate from the outside and show we could beat him without roughing him up on the ropes.”

With the fight pretty much even at the midway point, Porter was landing piston-like jabs and using his superior foot speed to get on the inside of the flat-footed Garcia.

Porter and Garcia both landed good, solid shots in the eighth, with Porter really starting to take the edge with his activity, which was off-setting Danny’s timing.

Garcia, however, would came back in the ninth and tenth. The once-beaten Garcia started using a little movement, while landing some solid left hooks and straight right hands.

With the fight even going into the championship rounds, Porter came out the aggressor using his angles and footwork, getting on the inside of Garcia.

Garcia would come back in the 12th and final round. He landed some good hooks and body shots. With the crowd on their feet, Garcia tried to press the action, but Porter held on, not trying to risk getting caught. After 12 exciting rounds, the judges had it 116-112 and 115-113 twice, all in favor of Porter.

“I thought I did enough to win. It was close fight. The judges didn’t give it to me.

He was throwing a lot.  I had my defense tight, so it wasn’t effective. I thought I landed the clearer shots. I thought I won this fight.”

In the lead-up to the fight, both fighters had mentioned that they wanted to fight welterweight titleholder Errol Spence after this fight. Spence was in attendance and after the fight wasted no time calling out the newly crowned champion.

“The same way that you called Danny out, I’m going to call you out.

I think I’m the best welterweight in the division.  I’m the truth and I guarantee you I come home as unified champion. I definitely want that fight against Porter.”

It was a good fight. Shawn looked like himself. I didn’t see anything different in his style, so we should combine to make an incredible fight.

I’m ready for whoever next. Mikey Garcia, Shawn Porter or Keith Thurman. I want any and all of them.”

The 147-pound division is stacked with talent. Keith Thurman, who was also in attendance tonight, has not fought since defeating Danny Garcia last March. With Thurman hopefully returning sometime next year and new welterweight champion Terrence Crawford joining the mix, fight fans have a lot to look forward to in the upcoming years. 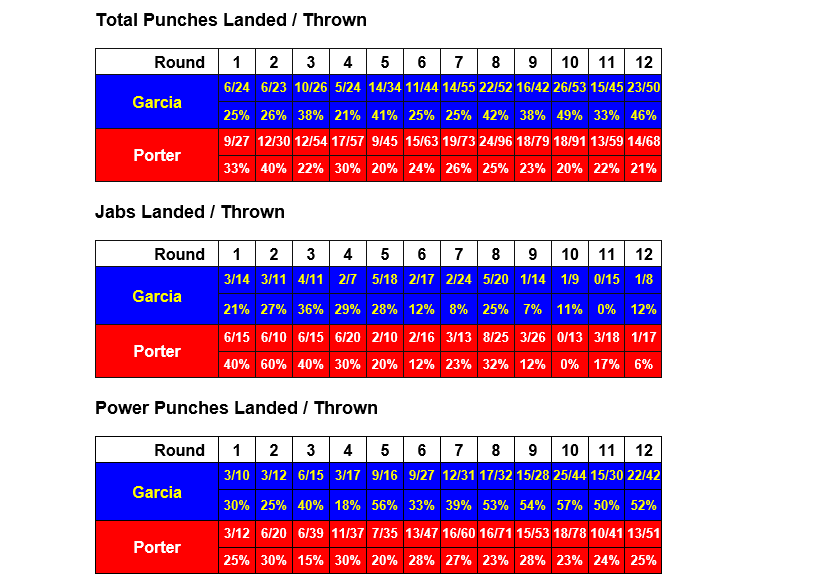 Both fighters came out throwing some wild punches, but Ugas controlled the action early by landing some brutal body shots which seemed to hurt the power puncher from Argentina. Ugas, showed great poise as he used his physical advantages to easily outclass the rugged Barrionuevo.

“We won today and I think I showed my talent. I’m happy with my performance. I showed enough, now I’m ready for a championship fight.”

Barrionuevo, who was making his U.S. debut, had some solid moments of his own, landing some good left hands and body punches. However, it was the defense and range control of Ugas that would turn out to be too much.

“He has power, so I had to control the distance. He’s strong moving forward. I feel really good and I’m happy to be in this position one step closer to a world title.

I want the winner of Danny Garcia vs. Shawn Porter. I’m here to compete with the top-level guys in the sport.”

With the crowd booing round after round, Ugas, who is a Cuban native but fights out of Las Vegas, threw a flurry that would bring some cheers from the crowd. Most of the rounds were pretty similar. The crowd continued to boo but Ugas kept displaying his superior boxing skills against Barrionuevo, who just couldn’t seem to get in any sort of rhythm.

“I just didn’t have the right distance tonight. It was hard to catch him and attack. He countered well and attacked the body. I showed my heart but he was the better fighter tonight.

Just the heart is not enough, but I’m going to keep working hard and getting better. I got beat by a great fighter tonight.”

Ugas finished with a strong flurry, briefly stunning Barrionuevo, who would open up and throw more punches in the 12th and final round which would cause some cheers. Whether those cheers were due to the increase in action, or the fact the fight was over, is still a question.

All three judges scored the bout the same 120-108 in favor of Ugas.

Kownacki Defeats Martin in a Slugfest

Kownacki, a Poland native who fights out of Brooklyn, hasn’t fought since he stopped Iago Kiladze on the undercard of Errol Spence-Lamont Peterson back in January.

The undefeated Kownacki started out pressuring the former belt-wearer, landing some straight right hands to the body and some hooks to the head. Martin also had some success landing his left hand and body shots.

While Kownacki walked Martin down behind the peek-a-boo defense, landing to the head and body, it was Martin that seemed to gain a little momentum as he starting to get on the inside of Kownacki and dig the body.

I will get back in the gym. I’ll keep on going. Looks are very deceiving. I put up a hell of a fight and I came up just short.”

Kownacki, 29, seemed to pick up the pace in the middle rounds. The undefeated brawler would land a barrage of punches, hurting Martin on several occasions and brining the fans to their feet.

“I think the fans liked it. It was a good fight. I worked really hard to look impressive tonight.

The Polish fans were awesome tonight. It definitely gave me a boost. It’s a blessing, they’re the best in the world.”

The St. Louis native, however, would not go away easy. A clearly tired Martin brought the fight to Kownacki who also seemed to be fading, landing some good left-hands and gut-wrenching body shots.

“Charles Martin gave it all in the ring tonight. He put up a good fight.”

After a slow seventh, Kownacki came out aggressive in the eighth. He landed some thunderous bombs. Martin would continue to show tremendous heart as both fighters finished the round with a flurry.

With the crowd on their feet, both fighters laid it all on the line, throwing bombs trying to get the knockout. At the end of the night, all three judges scored the bout 96-94 in favor of the Kownacki.