I hate these slow weekends. I hate them more when the only main event worth a dime cuts off midway through the fight.

Joseph Diaz Jr. earned the win, but it’s disappointing he couldn’t make the weight. He doesn’t seem like the kind who would do that, but then again, I’ve heard that said far too many times to be surprised by it.

Worst off it’s become a common occurrence. I’m no fitness expert but my guess is part of it has to do with the lack of fights guys have. Working 6-8 months a year as a top-10 level guy and getting soft in the off-time isn’t going to do the body favors.

This boy is dreaming. It’s not that Hughie couldn’t beat Pulev–it’s within the realm of reason. But his soft-punching boxer-mover style isn’t going to keep big ol’ AJ off him if it couldn’t get the job done against Parker, and he sure as hell isn’t going to make some lengthy run with his brother. I’m a Lomachenko fan. Anyone who listens to Inside Boxing Weekly knows this. I’m also not stupid enough to believe “Hi-Tech” could move up yet another traditional class and take a ‘W’ against one of the greatest to ever do it.

To be honest, Lomachenko looked a little undersized at 135 and part of me still believes he could have remained at featherweight, had he so chose to. Can people watch the fighters before they propose these mismatches? Both were great fighters, but any familiarity with Chavez’s career shows that 147 was, for all intents and purposes, the end of the line.

“Tommy” guns him down. I’m all for Crawford moving up to 147 and taking on the best there. Who doesn’t like the idea of him versus Spence? No matter what his walk around weight is, however, he’s undersized and will likely only trek as high as 154 if the opportunity arises, a bit like Pernell Whitaker. I’m not calling Crawford Jose Napoles, and I’m not saying Golovkin is Carlos Monzon, but there’s a pattern to these things matchups. My only rebuttal this time: 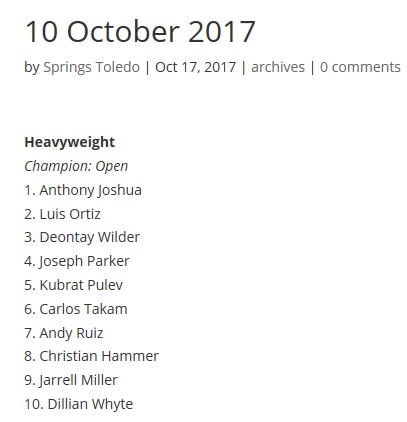