Undefeated Welsh boxer Lance Cooksey Jr. is on the path to titles. A product of Rhoose, South Wales and training out of St. Joseph’s in Newport, he’s made an impressive adjustment from the amateur game to the professional ranks.

Lance, 29, has been a professional for three years, racking up 12 wins, and the next step will be Welsh or Celtic honours in the super-featherweight division.

I caught up with the orthodox boxer for his take on his career so far. 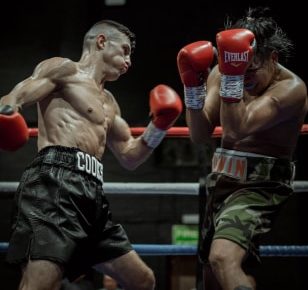 I first got into boxing from the age of ten. My Dad was a boxer himself, so I suppose I just wanted to follow in his footsteps. When I moved to Rhoose, aged ten, there was a boxing gym only a stone’s throw away from my house.

I had my first fight, at the age of ten, then stopped for a few years and got back into it when I was fourteen. I had around 70 amateur fights. Won five, or six, Welsh schoolboy titles. Won a couple of Welsh Youth titles and a Senior Welsh title. Also, I won a British schoolboy title and at Youth level.

I went to the Junior Commonwealth Games, in India, that was probably the best experience I had as an amateur. First, we went to Thailand, on a two-week training camp, with the likes of Andrew Selby and Daniel Chapman. India was a great experience; unfortunately, I lost in the first round to the eventual winner. Also, done a couple of Senior International tournaments. In Macedonia, I won Gold in the tournament.

Went on a training camp before the 2014 Commonwealth Games; unfortunately, I didn’t get selected. Zack Davies went in my place, we had fought in the Welsh championships the year before, and I thought it was a bit of a controversial decision. I thought I beat him, and everyone else did, but I suppose that’s boxing for you.

I always followed my Dad’s footsteps, and his favourite boxer was Roberto Duran. So, I grew up watching a few of his fights. My favourite fight was the second one with Duran and Sugar Ray Leonard, even though he lost. I liked both fights.

Mo Prior is my manager, and things are going really well. I’ve got a two-year contract, and he’s been talking about getting me title fights. There is talk of a title fight for my next fight, possibly the Celtic belt. So, after this coronavirus (the UK is in lockdown and no boxing taking place) that’ll be my next fight. If I win that, then, hopefully, we’ll be going onto bigger things and the British belt at some point. The coronavirus has slowed things down for me and everyone.

Tony Borg is a fantastic trainer. He gets to know all the boys individually and advises inside and outside of the gym.

You train at St. Joseph’s in Newport. Describe the gym and who’re the characters there?

Tony Borg goes on about that there should be a trophy for the dullest person in our gym. Not too sure who has got that at the moment (laughs).

I train full-time, training twice daily, every day bar one day a week. But I work full-time as well, so it is quite straining on the body. I got a mortgage to pay, boxing is good, and you can make a lot of money in it. I work as a GP Exercise Referral Professional. I do have sponsors, who help me out, without them I probably wouldn’t be able to do it.

It’s probably just being in the gym and the atmosphere, every one of us pushing each other. When there is a few of us who have fight dates, then the atmosphere is just fantastic. Just the fact of everyone being able to push each other. The sparring alone is just immense in the gym. I like all aspects of training but just being part of a team is my favourite part.

It all depends on who is fighting at the time. Ahead of my last fight, I was sparring a lot with Gavin Gwynne. We were doing eight rounds at a good pace.

We get quite a lot of boys who come in from the Bristol area (England).

I sparred Jacob Robinson, which is always good sparring – he’s a southpaw, strong, and he’s sharp. Gavin Gwynne is relentless and has a great engine on him. It’s always great sparring in the gym and puts you in the best preparation for the fights.

Everyone calls me ‘Lightning Lance’, they say I’ve got fast hands. I would describe myself as a come-forward box-fighter. I’ve got the ability to stand toe-to-toe but also, to box on the backfoot using the jab. A bit of an all-rounder but box-fighter is the best description of my style.

You made your professional debut, in Swansea, back in May 2017. How did you feel going into that fight?

I was terribly nervous going into my first professional fight. I think every fight I’m nervous, but I was really nervous. All the preparation, going from the amateurs and not really knowing what to expect. It’s completely different from the amateur game.

It was a fantastic experience and one I’ll never forget. I fought veteran Michael Mooney, and I gave him a really tough fight. He said afterwards that I was definitely a prospect and one of the hardest, toughest fighters he’s ever fought. Most people I fight say I’ve got a fantastic engine, hit hard and I’ll be one to look-out for in the future.

You’ve had twelve fights, winning them all. How do you rate your performances?

Every fight is a learning curve and every contest I’ve been improving. It’s all in preparation for a title fight. So, I’m coming along on the right road to winning titles rather than just fighting for titles. Every fight has been important for my career. It’s like stepping stones: you fight a journeyman, then a harder journeyman all in preparation for these titles. That’s what I’m in it for, to be winning these titles as soon as possible. Then stepping up opponents so that I can be the best I can be.

I think I’m developing as a professional fighter every time I step in that ring. I perform differently, depending on who I’m fighting. I perform my best every time, and I fight to my ability. Whether they were a boxer or fighter, I can change my style. I’ve won every fight, so I think every fight I’ve fought good. My best performance could’ve been my last fight against Daryl Pearce.

You beat Daryl Pearce in March 2020. How was the fight for you?

He was a last-minute opponent, and it was a tough fight. I damaged my hand in the third round. I was well on top of him, damaged my right hand quite badly – so, I won the fight off my jab for the next three rounds. Every fight is a learning curve, and that was a big one, winning against a tough, game journeyman just off the jab. That was a really good performance from me.

All boxers rely on sponsors, which ones are supporting you even though you can’t fight due to the coronavirus lockdown?

I’ve got fantastic sponsors from Vale Scaffolding, The Best Burger Van, M & M Body coaching, and NPower. I’ve got good sponsors who’ve been helping me out every fight. Hopefully, I’ve got a couple more sponsors coming through. It’s fantastic to have these guys on board.

I am taking things step-by-step. First of all, I just want to win my first title and be proud to win that title, whether that be the Welsh or Celtic. I want to win the British title and move on. I want things to move as fast as they can in the next couple of years. I want these title shots and see where I can go but British level definitely and above that. I’d love to be winning European titles.

I like to chill-out at home with my girlfriend. You know, just really chill-out. Boxing takes up so much time and obviously with work, when I get the chance to chill-out, I don’t like to do too much, to be honest. Recently bought a property and enjoyed doing that up.

Previous article
« SNBS – Empty college football stadia are not an option; economies would fail
Next article
Dropping the Hammer Racing Hour: Alex Gray and Michael Klein talk with Will Rodgers about his racing career, achievements and iRacing »