The welterweight division has always been a primary focus for boxing fans, largely because it’s produced so many greats, and because it has been generally dominated by American forces. With Errol Spence Jr.’s and Terence Crawford’s ascension, two more carrying on the American line, the search for potential candidates to challenge their lofty perches has begun.

25-year-old Rashidi Ellis is looking to throw his name in the 147-pound hat soon. His 19-fight professional career has been built on steady progression by Golden Boy Promotions, and on the back of a 60-11 amateur career that includes three New England Golden Gloves titles and one PAL crown. Right now his tally stands at 19-0, with 13 of those coming inside the distance.

Being a Massachusetts native, it’s an interesting note that Ellis has traveled outside the mainland United States for over half of his fights. 12 of them, to be exact—his upcoming contest included. He has made Puerto Rico and the Dominican Republic stomping grounds, but Mexico is where he is off to next. The opponent, Alberto Mosquera (25-3-2, 16 KOs), is a lefty who pushes the action and wings power shots. Mosquera has been in with several recognizable forces, namely Sammy Vasquez and Erick Bone—the latter of which he defeated by split decision. However the Vasquez contest showed that he can be out-sped, which is trouble when you are paired with a man nicknamed “Speedy”.

Without doubt the byname is apt, accurately referencing his most clear physical aspect, hand-speed. Ellis is bull-whip quick and it was a trait his promoter recognized quickly. They made use of him in sparring sessions with Saul “Canelo” Alvarez. Rashidi helped prepare Alvarez for Miguel Cotto but came in particularly handy in the runup to the bout with Amir Khan, a man whose swiftness is world renowned.

Ellis combines this natural gift with a flashy, arms-down, mover style in the vein of Adrien Broner. He likes to work behind an up-jab, bait guys into counter-punches, work the straight right hand, and frequently visits the breadbasket. He has a penchant for wearing Broner/Sharmba Mitchell-like trunks, as well.

Rashidi Ellis stated previously that his boxing heroes were “Sugar” Ray Leonard, Floyd Mayweather, and Meldrick Taylor. All were lightning fast operators with varying styles who at their best flew in rarified air. Whether Ellis can join them is not prudent, so long as Ellis believes he can. 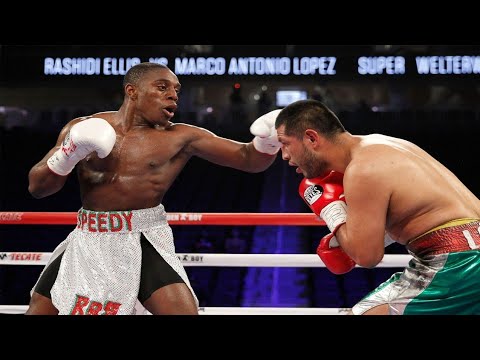 If I Were a Boxing Matchmaker: Errol Spence

Howdy folks. Welcome back for another edition of matchmaker. Although I start ...