The Grueling Truth - Where Legends Speak / Was Lennox Lewis the Champ We All Thought He Was?

Was Lennox Lewis the Champ We All Thought He Was?

Surely those researchers over at showtime are wrong?

A Twitter beef broke out between all-time great Lennox Lewis and Showtime earlier today when showtime accused Lewis of NOT being a former undisputed champion. A strange thing to think, and one which Lewis rightly got upset with.

After a brief back and forth and several hundred tweets from Lewis’ fans all over the world to Showtime, trying to explain the error of their ways they published this…

“With great respect to Lennox Lewis, who was the greatest heavyweight fighter of his era, and who was clearly the No. 1 heavyweight world champion in 1999, we stand by Mauro Ranallo and our research team. Mike Tyson is the last undisputed heavyweight world champ. Here’s why: In 1987, Tyson beat Tony Tucker to unify the only three recognized world title belts at that time—the WBC, WBA and IBF belts. As such, Tyson held the distinction of “undisputed champion” until the crowning of the first WBO heavyweight champion in 1989. In 1999, when Lennox Lewis defeated Evander Holyfield for the WBC, IBF and WBA world titles, Vitali Klitschko held the WBO heavyweight belt. At that time, the WBO was widely recognized as a legitimate world sanctioning body. WBO champions at that time included Joe Calzaghe, Naseem Hamed, Marco Antonio Barrera and Klitschko, all future hall of famers. Having said that, we recognize that the term “undisputed” is somewhat subjective, and knowledgeable people may differ on the use of this term in boxing. In no way do we intend to devalue or denigrate Lewis’ accomplishments, which stand as the greatest of his era.”

Showtime believes that the last undisputed heavyweight champ was Mike Tyson. Whilst he is certainly a massive name within boxing he is not the benchmark that all others since his time should be judged against.

Whilst the WBO was starting to gain credibility at certain weights during the reign of Lewis, it was not thought of anything more than a fringe title in the heavyweight division. A little like the IBO title is currently viewed. George Groves for example, “binned” the title before he even fought for it against Eubank Jr. recently. 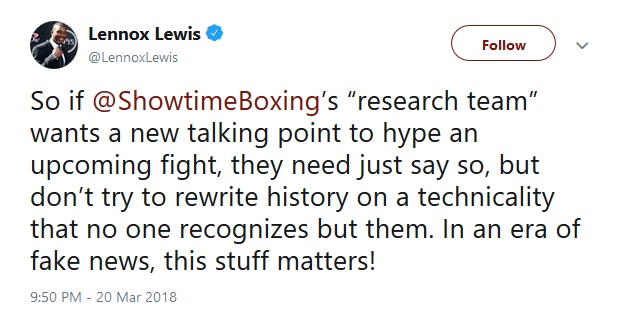 Pretty much nailed on thinking from Lewis here, I think. Not only has he been involved in boxing his whole life, he has risen from top of the amateur tree to the top of the professional tree; to being part of the all-time greats and is now a big personality on US TV as a pundit/commentator, so he should and indeed does know what he is talking about here.

For showtime to not recognize him as a former undisputed champ is a huge error of judgment. It cannot be an error with the knowledge of the research team, a quick google onto Wiki explains the error of their ways. It is a statement made on purpose in order to garner some interest in a fight for their fighter Wilder.  In that regard this has been a huge success, depends on which side of the fence you sit I suppose.

For me, history has judged that Lewis is a former undisputed, three-time, lineal champion of the heavyweight division. Showtime would do well to think about that…