It's that time again

Edition number two is here and it’s not without some nice additions. Boxing continues to be a case study in human tribalism and men who represent the top tier of the sport—guys like Vasyl Lomachenko—highlight that in 4K resolution. In an effort to downplay the Ukrainian’s accomplishments, all sorts of logical fallacies get tossed around by what has been labeled the “demographic”. But it all matters little. “Hi-Tech” is currently the best fighter on the planet.

Regarding in-group/out-group think, you had a big English/Welsh rivalry in Leeds, England, with Josh Warrington and Lee Selby going at it for some trinket. Let us just get this one out of the way first. The overwhelming majority of folks thought this would be a one-sided affair that the taller Selby would win. Warrington put a sock in many of our mouths with his spirited effort. The guy is now a top-ranking featherweight. Good for him. 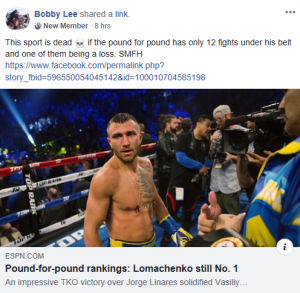 It’s amazing how the simple use of context isn’t understood by folks like this until you start mentioning how Wanheng Menayothin is now 50-0 alongside their idol Floyd Mayweather Jr. Then all of a sudden they sober out of their drunken stupor like a policeman had just barged through the door of a house party to defend “Money’s” championship resume.

All of the petty hole-poking in the world can’t save this guy’s ignorance from the fact that Lomachenko’s resume and talent are outstanding for a man of his professional inexperience. Seven of his opponents were or would become top-10 fighters in their respective classes; six were or would be ranked in the top-5; one was lineal champion; one was The Ring belt-wearer; and one belonged in The Ring’s top-10. 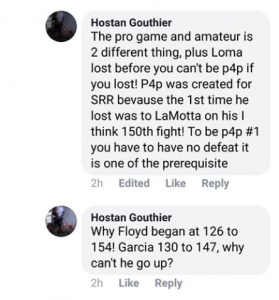 A list of most pound-for-pounders since its inception: Mike Tyson, Julio Cesar Chavez, Pernell Whitaker, Roy Jones Jr., Oscar De La Hoya, Shane Mosley, Bernard Hopkins, Floyd Mayweather Jr., Manny Pacquiao, Terence Crawford, and Vasyl Lomachenko. At least five of these men had something in the loss column when they sat atop the list. Prerequisite invalidated.

His fluency in the term “pound-for-pound” and Robinson’s record is clearly misunderstood. Not only did Robinson lose against LaMotta in his 41st bout, but the concept of pound-for-pound goes back further than “Sugar” Ray. The fantastic Benny Leonard received labels like that and that’s decades prior. 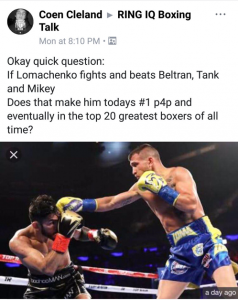 There is always a flip-side to the madness, and here is an example. First off, this comment ignores the fact that just about everyone has the Ukrainian southpaw number one on the pound-for-pound list–Transnational certainly does. There is no ascension to be had, barring a future takeover by stablemate Terence Crawford. Secondly, Ray Beltran and Tank Davis would be fine additions to an already “Hi-Tech” CV, but they aren’t historically prominent figures. In fact, Garcia himself has some proving to do, but we would still be talking about a matchup between two featherweight/lightweight behemoths, and the victor would undoubtedly up his pound-for-pound stock.

The truth of the matter is any modern fighter will find it incredibly difficult to rub elbows with the greats of yesteryear because they were so active and oftentimes fought each other at a much greater clip than what you see today. Men like Jimmy McLarnin, who many would label top-20-ish all-time, spent about half of his career against men rated in the top-10 and over a third in with Hall-of-Famers.

On the bright side, it’s not impossible.

Can You Snell the BS? 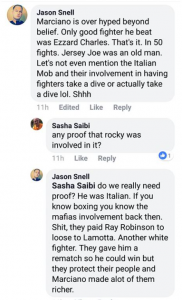 “Do we really need proof? He was Italian.”

Those Were Some Tough Taxi Cab Drivers 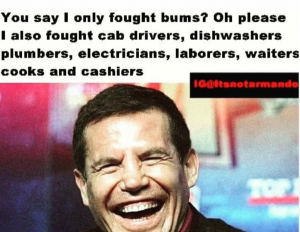 I love a good meme, but I have also seen stuff like this too many times to see that it’s been born out of a fan rivalry between the Chavez and Mayweather crowds. One blathers on about Chavez reaching an active 89-0 (though let’s be real, Chavez lost to Whitaker and had a shady decision regarding his 12th pro fight), while the other worships the retired mark of 50-0 by Mayweather.

Make no mistake, both were excellent practitioners of the gloved game, but the shot here is about Julio’s quality. There is no denying Mexico’s son took on loads of of sub-par boxers and that helped pad his record, but from the time he took on Mario Martinez he overcame some rock solid pros. Martinez himself went on to lose split decisions against Roger Mayweather and Azumah Nelson. Ruben Castillo, Roger Mayweather, Rocky Lockridge, Juan Laporte, Edwin Rosario, Jose Luis Ramirez, Meldrick Taylor, and others showcase a pretty damned good list.

Just an anecdotal piece, but Ruben Castillo, who has been on our boxing show a few times and who fought Salvador Sanchez and Alexis Arguello, complimented Chavez as the best fighter he ever squared off with. 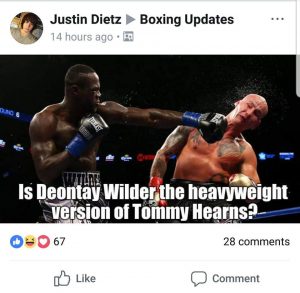 He is if the only thing you know about Thomas Hearns was that he was tall, black, skinny, and could bang your head off your shoulders.

* A big thank you to everyone who contributed to this: Anthony Cocks, Jason Goc-Ong, Bill Demas, and whoever runs that quality Boxing Prime page.

When the world’s greatest female fighter battled women with fists and men ...

FanDuel Bonus
Bet One, Get One: We’ll match your first bet placed up to $250 in free bets
T&Cs apply
9.4/10
Go to Sports Betting Bonus Comparison
Latest News
Kevin Durant: To Trade or not to trade?
Durant trade? There are conflicting reports regarding Kevin ...
Betting the Packers Win Total Over/Under for 2022: How You Should bet it?
Take the Packers over/under win total? If you ...
When will Pacioretty be back?
Max Pacioretty, New Canaan, Connecticut, will not be ...
What are the keys for a second year leap by Trevor Lawrence
Trevor Lawrence’s rookie season was not a success. ...
The Hypocrisy of Major League Baseball, Gambling, Steroids, and Why it’...
If you have ever read my previous articles ...
Best Sports Odds
Matched & EV Betting
How to’s of Sports Betting
Sports Betting Deposit Methods
Top Social Casinos
Social Casino of the month