PBC has a number of interesting prospects, don’t they? Whoever scouts their talent deserves kudos.

I’m not sure about that Ancajas decision, but if talks between him and Rungvisai amount to something concrete, I’ll be happy. That’s a big Asian showdown and I reckon if Rungvisai can come out of that and an Estrada rematch with wins, he’ll be up there with the greatest Thais to ever lace on a pair.

What did you guys think of the manufactured dislike between Deontay Wilder and Tyson Fury?

How serious are we? 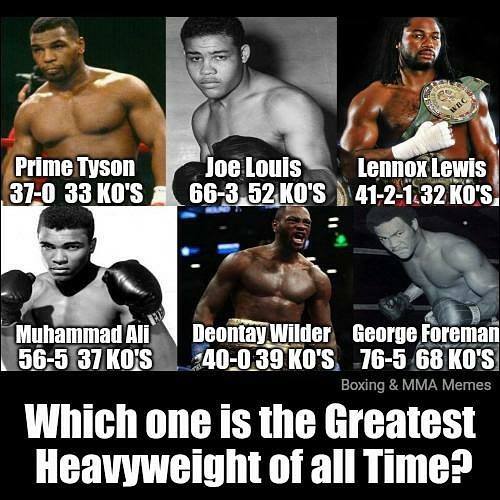 All jokes aside, Wilder is the sore thumb here. The Church of Wilder has been turning out a lot of converts lately. Anyone know where they are going to get baptized? If you are asking this, you didn’t watch Roy. Amazing what reputation a shiny record and a bunch of knockouts will buy you. This thread was much worse than this, with all sorts of odd, illogical ways of the OP justifying his stance. I’m always happy to be told what a boxing dunce I am, however.

Most respectable observers of the sport I know saw Castillo beat Mayweather in the first go-round. Given that, I don’t think it’s that big of a shame to arguably lose to Castillo, who seems willfully ignored as a very good lightweight. It should be acknowledged that many of boxing’s best have gotten favorable nods when they didn’t deserve it. Remember Rocky Lockridge? I saw him beat Wilfredo Gomez in Puerto Rico and thought he should have walked away with the decision in the first Eusebio Pedroza bout–maybe even the Chavez fight, too. Muhammad Ali, Gene Tunney, Mickey Walker, and even Sugar Ray Robinson had their hands raised when they weren’t convincing victors. I wouldn’t denigrate Mayweather much because of it, especially when he cleared things up in the rematch.

Reading in three other “losses” is just hate. This dude is so boring. Do we have to go through with this again?