What a weekend, right? I know, not really. Besides the main event on DAZN, the card didn’t do itself many favors. I would, however, commend Luke Campbell for his effort. While it wasn’t the most appealing performance we have seen from him, it was his sharpest effort. He was responsible the whole way through, went nicely to the body, and looked more fluid than I have ever seen him. The problem is, where does he go from here with Lomachenko and Garcia at the top, and Linares right behind them?

A congratulations should be extended to Anthony Joshua and Alexander Povetkin, as well. I have always told people how well-rounded the Russian is. He’s nuanced, a genuine thinker in an era of lumbering heavyweights, and he has speed and pop to compliment it all. Unfortunately he’s seen better days, but he was in the fight all the way.

With Joshua, overcoming a test like that will only expand his own ring I.Q. and make him a more formidable fighter. You got to love his killer instinct, too. Once he had Povetkin hurt he didn’t let him off the hook. There should be no doubt he’s the #1 heavyweight in the business. 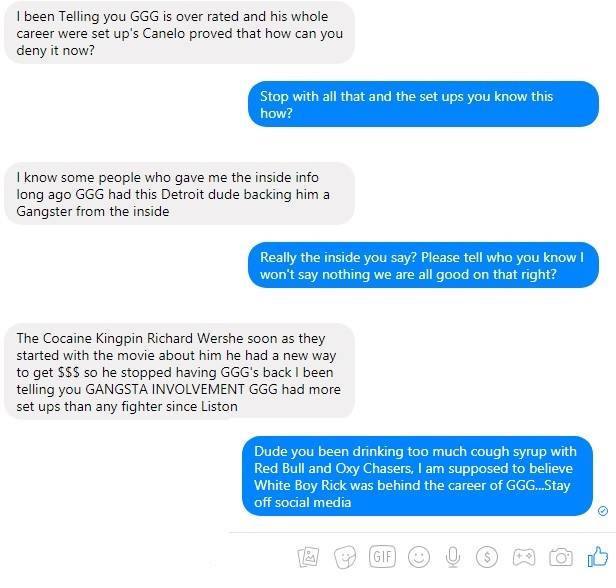 What else is there to say but no? Hard to believe someone with the internet couldn’t do a quick search instead of putting themselves out there like this.

“Canelo would be destroyed by Hagler.” There, I fixed it for you. Not even Adrien Broner should want to see this. He would be trounced in a division he belongs nowhere near. I like what I have seen from Prograis. Tall punchers are styles I usually gravitate towards. However the Louisiana-based fighter has a long ways to go before he should be mentioned in the same breath as Crawford. There were a good number of others who picked Spence, too.

I mean, someone would have to win, right?

I’m not sure Golovkin is the ideal candidate for people looking to promote their racist agenda, unless of course you have some fringe element who believes that a mix of native European an East Asian stock creates some Übermensch.

Aside from that, it’s patently absurd to label Golovkin a “hype job”. Show me a 34-36-year-old aggressor who can fall back on their boxing skill and arguably beat his top-2 challengers.

*A thank you to Eric Duran from Bitedown Boxing, Bill Demas, and Michael Montero for spotlighting these fine people.