Unfortunately for many, Ray Beltran isn’t going to cash out one last time before riding off into the Arizona sunset. Puerto Rico’s Jose Pedraza threw a wrench into the plans, outboxing the native Mexican throughout most of the contest, using a quick southpaw jab, a varied offense, and a nice mix of upper-body movement and footwork to create confusing angles. I had two small gripes about the whole thing: One, Beltran’s niceness saw tons of people sweep his former PED use under the rug; two, the switch-hitting Pedraza could have made things easier on himself by simply staying active. He left a lot of ambiguity in many rounds because of his caution, but the late knockdown and ending flurry really helped stamp his case.

Ultimately the right guy got the decision, though he is only keeping that shiny piece of metal and leather warm for Vasyl Lomachenko later this year.

Can we get on with Lomachenko vs. Garcia? This guy is a casual in two categories. Someone throw some Nando’s at this kid. You can almost taste the vitriol. But he’s not alone in his criticism. Golovkin has become a regular for little hit pieces like this. Much of it is tribal in nature and I get that, but win, lose or draw in September, GGG should be touted as a model which others should follow. His nice guy persona, his emphasis on the knockout, his prime pace of four fights a year, and his willingness to challenge anyone in his class is commendable in a sport which has few like him. 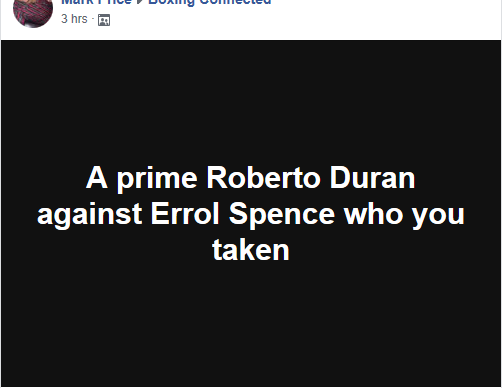 When puffy-nipples Spence proves himself in the same realm as Ray Leonard, we’ll come back to this. Until then, let the kid prove himself. Roy Jones was never a welterweight, nor was Hagler, nor was Randy Turpin. The Joey Maxim fight has nothing to do with this and Thomas can barely formulate a coherent sentence. Just a string of irrelevant nonsense which doesn’t pertain to the question.

Just my two cents here, but I wouldn’t favor any welterweight over him. The other Sugar Ray would have the greatest shot. Two birds of a stylistic feather coming together… No doubt a classic.

A big thanks to Zakwaan Shaukat Ali and Bob Day for their contributions.

Previous article
« Ringside Boxing Show: Joel Diaz Jr. on re-starting his career, washing GGG’s big-ass underpants, & other boxing lessons
Next article
Sports of All Sorts: Author Mark Ribowsky talks about his book “In the Name of the Father: Family, Football, and the Manning Dynasty” »