A lot of speculation going around about Sergey Kovalev’s loss to Eleider Alvarez on Saturday. Was it the absence of John David Jackson? Doubtful, seeing that Kovalev is a veteran who has fought much the same way, with or without Jackson in his corner. Jackson hasn’t been a make-or-break trainer and the “Krusher” actually looked more versatile than maybe I’ve ever seen him, utilizing a left hook with uncommon regularity.

Was it age? That had to be a factor, but not the factor. After all, no one is at their physical peak at 35 but the Russian was ahead in the fight.

Was Kovalev overrated? Had he gotten the nod in the first Ward fight, like many of us thought he should have, he would have been seen as bordering, or even acquiring the status of a light-heavyweight ‘great’. So I don’t think that’s it.

The answer, like so many others in boxing, is that it’s complex and needs to be viewed as such. It was likely a mix of age, a defensive lapse, Alvarez’s ability to capitalize on it, and Kovalev’s lack of grit.

Does that mean Sergey Kovalev is finished? He could still beat some talented guys, but he probably won’t be the top dog again. Come on. The Colombian deserves a world of credit for scoring the upset, but if you’re thinking he’s the natural puncher that Trinidad was or that he’s going to accumulate 10+ defenses of his trinket, I’m not on board with that. This division is red hot and he isn’t coming out of it unscathed.

In the now poorly aged words of Nancy Pelosi predicting Donald Trump will never be president, you can take it to the bank. I’m fairly familiar with boxing terminology but I don’t believe a guy who makes it as high as #1 in a weight division of 1,044 other contestants, manages a #3 spot on the pound-for-pound list at one time, and beats three top-5 guys and one top-10 guy, deserves the “bum” tag.

I’m simply going to quote my boxing friend Buddy Gibbs’ response because he deserves credit for it:

“Robinson’s best weight was of course welterweight but he was a great middleweight as well. It wasn’t because of the jump in weight that Ray started losing, he did well as a middleweight, it was time that caught him. He started losing more when he was old and shopworn like any fighter does if he stays long enough.

— He had 2 losses, 1 draw and 1 win against Fullmer. But there is no way Fullmer won the fight that was declared a draw. He was really 2 losses and 2 wins against Fullmer who was 10 years younger (Ray was 39 in the last fight) with one of these coming by knockout for Ray. Fullmer had never been knocked out before or after fighting Robinson. Fullmer also fought dirty as hell when facing Ray and didn’t get called on it and still struggled with him.

— Bobo Olson was the longest reigning middleweight champion in his era and the two people he met that were his kryptonite were light-heavyweight knockout artist Archie Moore and Ray Robinson. Olson called Robinson the greatest fighter he ever faced.

— Robinson beat Villemain 2X and also stopped Robert Villemain, a man who had never been stopped before or after fighting Robinson. Villemain had fought a loaded list of fighters himself.

— Even the LaMotta loss is a disputed decision and one that the judges decided off what many thought was a low blow. Ray himself was a welter but it was a middleweight bout with LaMotta being a light-heavyweight that cut down to make the middleweight limit.

– His two loses to Pender were split decisions and the first fight, after a 22-month layoff, was thought by the Associated Press and ringside polls to be the wrong decision. Who dedicates their time to this stuff and who falls into these click-bait traps which enables the existence of sites like this? 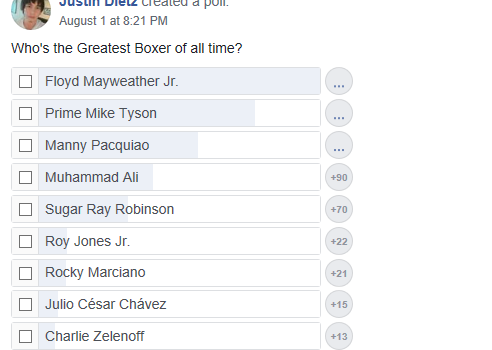 Good to see Zelenoff get the credit he deserves. I also love the addition of “prime” Mike Tyson, seeing as the assumption upon reading this list would naturally be the best version of “Iron” Mike. But of course his name coming in second and Mayweather’s placing first in one of the largest groups out there is a case study in casual fandom.