First things first, the World Boxing Super Series deserves a lot of credit for the cruiserweight tournament. From this we got a real, undisputed cruiserweight champion and a player at heavyweight whenever Usyk chooses to do so. We also got high-quality presentation and a business model that wouldn’t be all that bad for this continually fracturing sport to adopt. Could you imagine all the promoters coming together for something like this in every weight class? Could you imagine the betting money that it would generate?

Secondly, Liam Smith showed a warrior’s spirit in weathering the onslaught of the young power-punching Jaime Munguia. He didn’t lay down and highlighted defensive flaws that will get the Mexican in trouble in the future. People talk about how he’s only 21 and has plenty of time to develop, and that’s right, but I can’t recall seeing anyone that bad defensively reform significantly.

Thirdly, Zhora Hamazaryan was robbed against Thomas Mattice. I heard Fedor Chudinov got a bogus decision, as well. Let’s start punishing those judges,

Now, to the chase. Let me guess, he rewatched the fight with the sound off, in slo-mo, from a barstool, with his glasses off and a tinfoil hat on.

There are always post-fight reactions where “ulterior motives” are uncovered by an oh-so-watchful fan. Don’t get me wrong, there are all sorts of shady backdoor dealings going on, so some of them are that far-fetched, but stuff like this is poorly contrived. Logically it doesn’t follow. If Oscar was bent on fixing the Jaime Munguia-Liam Smith bout he would have had Smith lay down much sooner and with far less effort than that. Smith’s performance gave Munguia loads of bad press and had boxing writers galore telling people to pump the brakes. Anyone who knows this turd in real life knows he’s one of those guys when it comes to Gennady Golovkin. It’s a constant stream of slander and historical revisions, e.g. Triple-G and his team wanted no part of a faded Miguel Cotto who was fighting a classic division north of his best, he ducked Lara, he avoided Ward, etc.

Gennady wanted a contest with Miguel. After all, he only mentioned his name in interviews a number of times. But Cotto, along with many of us, realized it wasn’t worth the risk. That is part of the reason he dropped his trinket going into the Saul Alvarez fight.

One could potentially argue that Pacquiao deserved three more decisions–the Horn fight, the sole Timothy Bradley loss, and even the first Marquez fight. The latter usually emphasizes the Burt Clements flub. Granted that, there is no denying that Floyd Mayweather won their fight. Minus Skip Bayless, who is far from a boxing expert, I saw no notable boxing pundit give Pacquiao the nod.

I know it hurts of a lot of feelings to admit your hero took a loss, but you’ve got to come to grips with reality. 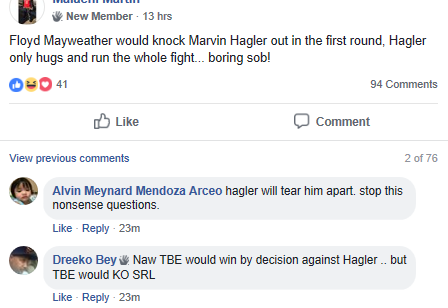 Man, these two are warped.