Well, I did say that Manny Pacquiao versus Lucas Matthysse would be a mismatch last Monday, and that it proved to be. Even at what is an advanced age and an unnatural weight division “Pac Man” looked like a player who would probably give anyone serious trouble, outside of the #1 and 2 guys, Errol Spence and Terence Crawford. It’s a credit to how great he really is. But let’s also be honest, that Matthysse was badly faded and far too slow to ever mess with Manny.

Looking forward to this weekend’s fight between Oleksandr Usyk and Murat Gassiev is one of the few treats we will have this year. It’s one of the most significant cruiserweight fights of all-time and the victor–maybe even the loser–will eventually move onto being a credible heavyweight. One aspect that should be particularly emphasized is that it is for THE Cruiserweight Championship of the World. It’s not something you often see, but it’s a nice legacy-builder. It went well enough until he mentioned one of the Charlo brothers, both of which are a traditional division north. Get your story straight, Stephen.

He wasn’t the only ESPN employee displaying a lack of boxing knowledge, however, as the color commentator for the Pacquiao fight claimed that Lucas Matthysse had fought a number of big punchers. One of those, to my surprise, was Viktor Postol. This is what too many trinkets does to the sport. Pacquiao is a legend, one of the few with undoubted credentials, but when guys are collecting secondary trinkets and getting credit as “world champions”, we’re muddying the waters even further and padding stats unnecessarily.

Someone tell Gilberto Mendoza Jr. to stop perpetuating this nonsense, again… and again. 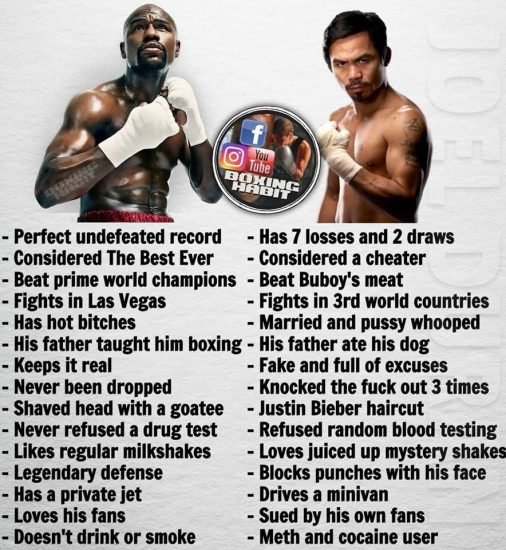 Soak this all in… Oh dear is right. This is downright embarrassing.

Hell to the Naw Naw I was a warmer supporter of Wladimir throughout his career than a lot of Americans. Even if you didn’t like him you had to admit that he was an excellent technician with pinpoint accuracy and one of the biggest single shots in heavyweight history. That right hand was a doozie. But he wasn’t the longest-reigning heavyweight champion in history, as this graphic implies.

I will repeat this until I am blue in the face–there is a difference between a champion and a titleholder. Klitschko was the latter up until he defeated Ruslan Chagaev in 2009. That makes his time spent as champion a little over half of the alleged time at 6.5 years.

What this amounts to is revisionist history, which is becoming commonplace because of the proliferation of belts. All of a sudden the WBO was a major organization in the late 90s/early 2000s and their belt-holders are being credited with feats few recognized at the time.

Previous article
« MLB Power Rankings – July 16, 2018
Next article
Survive and Advance: What are the Greatest Sports Rivalries in Sports History? Plus Wimbledon and World Cup »