Top Rank is really turning out some blockbuster main events, aren’t they? Has it been thought of that maybe HBO isn’t into boxing right now because of its conveyor belt-like stream of mismatches? I can’t say I know the reason, but if it was publicly stated I wouldn’t be upset one bit. The year is woeful so far.

Speaking of mismatches, I’m going to make a prediction: Manny Pacquiao vs. Lucas Matthysse becomes another one. I think the Argentinian was a rock solid fighter during his prime, a real puncher who could put your lights out with a flick of the switch, but he looked trigger hesitant in his last outing. Even at this stage “Pac Man” should be far too quick and elusive.

Enough with the small talk, though, let’s get this going.

Kudos to this guy for highlighting the absurdity of the WBA’s current cruiserweight situation. Only in a sport like boxing can this persist. Yet there seems to be no end to it. The alphabet soups just keep pumping out trinkets and milking guys for fees, all to the expense of boxing’s already poor reputation. The more like this guy the better, though it has to be a collective effort. The media and the fighters need to lend a helping hand in shunning this practice.

For an in-depth look at the alphabet madness, checkout a recent piece of mine here. 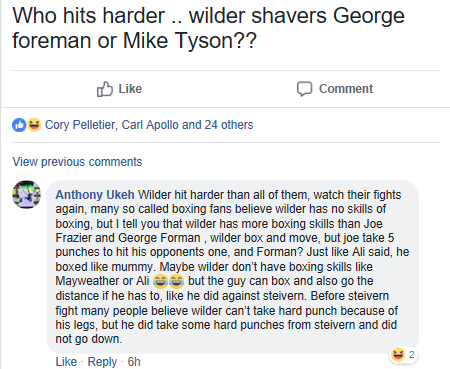 Is it only me who gets irritated when the term “boxing skill” gets conflated with ranged fighting? Roberto Duran’s infighting wasn’t skillful boxing? What about James Toney’s counter-punching ability while on the ropes? There are plenty examples to give, but the most worthwhile one is Joe Frazier’s fantastic performance against Ali in the first go-round, when they were nearest to their primes. Might as well use that one since Wilder is allegedly craftier than Frazier but not on par with Ali.

Take a look at this sequence: 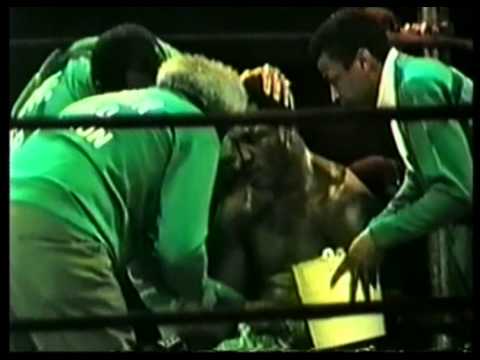 Frazier, while not landing much effectively in terms of offense, was able to integrate a variety of defensive maneuvers to evade the lightning-quick Ali–bobbing, weaving, and parrying. For a guy whose M.O. was to “take 5 punches to hit his opponents one”, he was awfully…skillful. 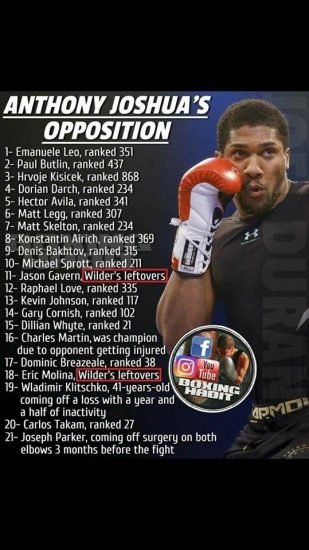 Someone was doing some post-fight boxrec searching because there isn’t a chance in hell Dominic Breazeale or Carlos Takam were rated that low before fighting him. Anyone who knows the heavyweight division can tell you Takam had been a mainstay in the top-10 for years and that Breazeale was on the fringe. The latter has broken into the fray now, however.

A more accurate way to read this is Anthony Joshua is 2-0 against top-10 guys, 1-0 against top-5, and 1-0 against a faded legend, which is more than Wilder can say. Joshua is expected to notch another quality contender later this year. Not a bad resume at all at this point in his career. 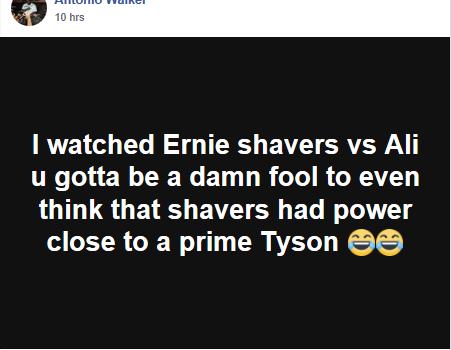 Right, let’s ask Larry Holmes. From an interview Holmes did with Boxing Insider:

Charles Jay: WAS EARNIE SHAVERS THE BEST PUNCHER YOU EVER FOUGHT?

Larry Holmes: Earnie Shavers was indeed the hardest puncher I ever fought, because he hit me with a right hand that jarred my ancestors in Africa, if you want to take a page from Ali’s book.

Charles Jay: WAS HE A MUCH HARDER HITTER THAN TYSON?

Larry Holmes: Tyson is a sharp puncher. Earnie Shavers was a PUNISHING puncher. There was a difference between the two. Because when Shavers hit you, you feel it all the way through your body. Chalk this up to something that never happened. These two fellas were on the same card, but they weren’t fighting each other.

*Another big thank you to Rob Day. He’s always looking out for stuff to post on here.