The Grueling Truth - Where Legends Speak / Can You Feel it Coming in the Air Tonight, Oh Lord: Remembering My Wilder vs. Fury 1 Experience

Can You Feel it Coming in the Air Tonight, Oh Lord: Remembering My Wilder vs. Fury 1 Experience

We’d been knocking back the drinks the night before and my mates were sleeping off their hangovers from the Santa Monica Fish Bowl cocktails. I shuffled through my Spotify track list and selected a song to rouse them from their beds. Out of the apartment’s speakers rang “Can you feel it coming in the air tonight, oh Lord, oh Lord.” It was the perfect choice to ramp up the tension for the fight we’d flown 5,000 miles across the Atlantic to see: Fury Vs. Wilder I.

It was fight day. In a few hours, we’d be sat in our seats seeing if the self-styled Gypsy King could still cut the mustard at the top level. Would the Fury that confused and out boxed Wladimir Klitschko turn up, or was that Fury long gone?

Fury’s fans were out in force, spilling out from the bars on to the effervescent streets. As expected, the mood was boisterous with chants of “There is only one Tyson Fury” echoing through the evening air. With our excitement building rapidly, we paused for a moment to take a photo before heading into the arena to find our seats. We were elated with our seats, located within spitting distance of where the fighters would soon be making their ring walks. Gala’s “Freed From Desire” started to pump out from the arena’s heavy-duty speakers and the crowd were sent into a frenzy. Ever the entertainer, Fury played to his fans with the crowd jumping up and down in unison with the Lineal champion. 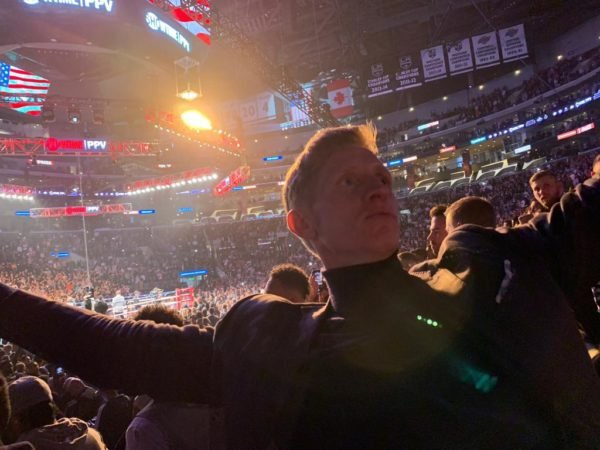 The intensity of the atmosphere and Fury’s performance exceeded my expectations. There were oohs and ahhs from the crowd every time Wilder let out a big shot, or Fury made his opponent miss. The rounds were flying by and it felt like our man was on top.

Then it happened. Round 9: Fury got dropped. Not heavily, but enough to remind us that he’s treading a very fine and dangerous line. Fury got back to his feet and continued with his slick boxing.

Twelfth and final round. He’s going to do this. If he can just avoid Wilder’s right hand for three more minutes… Boom! Fury is sent to the canvas again. This time it doesn’t look like he’s getting up. It’s surely over, why is the referee even bothering to count?

But then, like a phoenix from the ashes, Fury rises. Every single person in the arena is on their feet, jaws wide open. He even looks steady on his legs! Wilder pressed the attack, but Fury survived the onslaught, then caught Wilder with a heavy left hand before launching a sustained attack that pushed the American back across the ring.

Ding Ding Ding Ding Ding! The bell sounded, signalling the end of the fight. I turned to my mates and it was written all over their faces: we’d just witnessed one of the most dramatic heavyweight fights we were ever likely to see. I looked down to see that my suit jacket was torn at the right elbow – a testament to how emotionally invested I had been, throwing punch after punch with Fury from the edge of my seat.

So, what about the rematch? Fury has surprised me by weighing in so heavy at 273 pounds. Could he be looking to adopt the kind of tactics he employed against Steve Cunningham, and walk Wilder down behind a high-held guard? Or will the additional weight reduce Fury’s speed of foot, leaving him more susceptible to Wilder’s ferocious power? It’s a salivating contest in which the complexion of the fight will be clear from early on.

This time around, I’ll be nervously watching in the early hours from the edge of my sofa. I’m gutted I won’t be there but I’m sure the MGM Grand will be pulsating like the Staples Center was on that memorable evening back in December 2018. Only a few more hours to wait…

The final chapter to the trilogy between Tyson Fury and Deontay Wilder ...

If I Were a Boxing Matchmaker: Leo Santa Cruz

Howdy folks. Today I’d like to discuss some potential matchups for Leo ...