Cincinnati, Ohio–Cincinnati has a legendary boxing history and Saturday night at the Xavier University campus, another chapter was added. In a card filled with high expectations, all three televised fights on Showtime were excellent. The atmosphere, as usual, was electric as a ton of people made the trip to Cincinnati from Chicago to support their native son, Adrian Granados.

Fight One featured hometown amateur star Desmond Jarman, who was making his pro debut against Lucas Burger, who came into the contest with a record of 0-1. To say that Burger was over-matched would be a sizable understatement. Jarman took Burger out with a single left hook, ending the bout after just 29 seconds.

Fight Two was a matchup between two young fighters, Tra-Kwon Pettis and Mike Fowler. Pettis controlled the action the entire fight with a vicious body attack. Fowler was simply out-classed and Pettis won a unanimous decision with all three judges scoring the fight 40-36.

Fight Three saw undefeated Curtis Hill (9-0) destroy Cory Dulaney (5-3-1) with a single punch early in the first round. Hill looks like a prospect to keep an eye on.

Browne, the 2012 Olympian, struggled his last time out winning a controversial decision against Radivoje Kalajdzic. In this fight he dominated a game Thomas Williams Jr., knocking him down in the second round and then risking a disqualification by hitting Williams while he was still on the mat. Williams did some nice work to Brown’s body, but for the most part, this night was Marcus Brown’s.

Overall it was a beautiful performance by Browne, and it did answer some questions that were lingering after his last contest.

Browne also called out Adonis Stevenson after the fight, but in my opinion, he is not ready for a man of Stevenson’s class, yet. 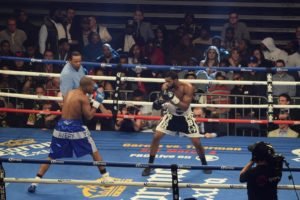 This fight, unlike the other fights so far in the evening, started off slow but picked up around the third round. Peterson unleashed a hellacious body attack on Avanesyan, and while Avanesyan fought back hard, he was not as strong or quick as Peterson was. Avanesyan proved himself warrior, but unfortunately when the evening ended, he was no longer a title claimant. All three judges scored in Peterson’s favor.

Peterson looked like an entirely different fighter at Welterweight–he was the aggressor. Instead of being a stick and move jabber he became a quick, aggressive attacker who destroyed Avanesyan to the body.

I would love to see Peterson get a shot at the Thurman-Garcia winner and I think he would have a real chance against either one of them. 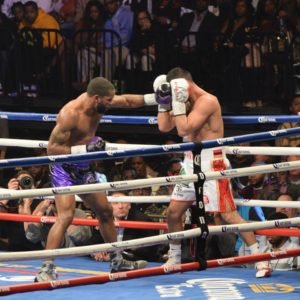 This, in my opinion, was a controversial decision, not a bad decision. I scored the fight 95-95 a draw, as did most of the writers sitting with me on press row. Granados proved to be tough to handle for Broner and what Granados had to overcome leading up to the fight made his performance even more impressive. The fight was supposed to take place at 142 and then about a week ago Granados was told that the weight limit was being moved up to 147. He was given a take-it-or-leave-it ultimatum that he accepted in stride. Then at the weight-in on Friday, he got on the scale and the scale showed that he weighed 148, a pound over the limit. After Lamont Peterson weighed in over the limit, a new scale was brought in and Granados eventually made the weight. Even though Granados was reweighed, Broner was not. I know Broner had made weight on the wrong scale, but I felt he should have been re-weighed also. 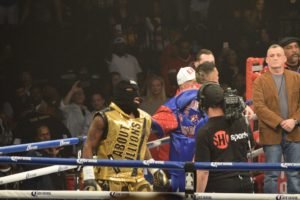 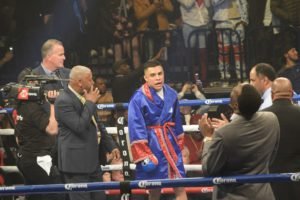 So against that backdrop, Granados started the fight off well until the third round when he suffered a cut on an accidental head butt. The cut seemed to change Granados’s game-plan. Granados was relentless the entire fight crowding and suffocating Broner as much as he could and it seemed to bother Broner significantly. The fight had also been scheduled for 12 rounds and that was changed to ten rounds, which also seemed to be in Broner’s favor because Granados controlled the tenth and final round while Broner was tiring. It was a gutty performance by both fighters, but I believe to be successful they both need to drop back down to 140 pounds. 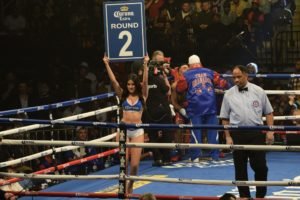