Arguably the most thorough beating in championship history

The Manny Pacquaio vs Jeff Horn bout sees a popular champion in Pacquiao place his title on the line against an unknown Australian contender. Australia has a rich boxing history, with many great fighters such as Jack Johnson, Archie Moore, Sam Langford and Emile Griffith having fought in Australia during their rise to the top. Throughout boxing history, similar matches have been made where popular world champions have defended their titles against Australian boxers, who were heavy underdogs as they were yet to make their mark on the world scene.

South Africa’s first, and only, undisputed world champion “The Benoni Atom” Vic Toweel made the fourth defence of his title against Australian champion Jimmy Carruthers on the 15th of November in 1952 at the Rand Stadium, Johannesburg, South Africa. Toweel had stayed relatively busy since dethroning all-time great Manuel Ortiz in 1950, winning twelve fights and drawing one (against French featherweight Georges Mousse, a fight he avenged in his next outing), capturing the South African featherweight title in the process.

Toweel was considered a phenom, reportedly losing only twice in his amateur career of nearly 200 bouts (one of the losses coming in the 1948 Olympics to Argentine Arnoldo Pares via controversial decision) before turning professional and dethroning Ortiz in just his 14th professional bout. Winning a title this early in a professional career was far less common during the 40s and 50s. After 14 pro bouts most fighters were barely progressing to eight round bouts let alone fighting for, or winning, world titles. In the first defence of his world title, Toweel knocked British champion Danny O’Sullivan down 14 times before stopping him in the tenth round. In his last two defences, Toweel put former European champion Luis Romero, veteran of 140 professional fights, on the deck in the first and final rounds on his way to a unanimous decision victory and then also outpointed Scotsman Peter Keenan, who was the reigning European champion, two months later.

Jimmy Carruthers, born in the Sydney suburb of Paddington, also fought in the 1948 Olympics, defeating Canadian Fred Daigle and Arnoldo Pares, who defeated Toweel, in his first two matches. An eye injury sustained in the bout with Pares forced Carruthers to withdraw before what would have been his quarter final bout with eventual gold medal winner Tibor Csik. Like Toweel, Carruthers moved quickly through the professional ranks, winning the Australian bantamweight title in just his eighth bout with a one-sided decision win over world rated knockout artist  Elley Bennett (who also held the Australian featherweight title) in May, 1951. The southpaw Carruthers, known for his machine gun like hand speed, then defeated two-time world title challenger Luis Castillo, which, combined with the victory over Bennett, helped place him as number one contender to Toweel’s title.

An Australian hadn’t fought for the world title since Bill Lang was knocked out by heavyweight champion Tommy Burns in 1908 in Melbourne. Lang had Burns on the canvas, courtesy of a left hook, for a six count in the 2nd round but eventually succumbed to the Canadian’s infighting in the 6th. Burns was followed to Australia by Jack Johnson, who felt he was being denied a title shot from Burns, and three months later Burns lost his title to Jack Johnson in Sydney.

Other Australians had claimed world titles prior to Carruthers’ challenge but none were universally recognised. Mick King and Les Darcy were both recognised as the middleweight  champion in Australia, after defeating American title claimant Jeff Smith in 1914 and 1915 respectively. Albert “Young Griffo” Griffiths was recognised as the world featherweight champion by Australia and Great Britain  after defeating New Zealand’s “Torpedo” Billy Murphy in 1891 but not in America and Griffo outgrew the featherweight limit before he could be matched with America’s champion George Dixon.

Originally scheduled for October 4, the Carruthers-Toweel bout was postponed originally until November 8 after Toweel was suffering from double vision from his August rematch with Mousse, but then again until November 15 after Carruthers contracted a blood infection, possibly caused by an insect bite on his foot. The blood infection was so serious that Carruthers’ foot might have been amputated if not for “modern medicine”. However the fight was only delayed one week. Carruthers and trainer Bill McConnell had arrived in South Africa in June to acclimatise for the bout and Carruthers’ impressive wood-chopping workouts and sparring sessions in the months leading up to the bout helped draw 28,000 fans to the Rand Stadium on fight night. What they witnessed was one of the most explosive and one-sided world championship fights in boxing history.

Carruthers, the 3-1 underdog, landed a huge left hand from the southpaw stance just seconds into the fight that staggered the champion and he stumbled back into the ropes. Carruthers jumped on Toweel, circling to his right to avoid Toweel’s clinch,while hammering in left hands as the champion teetered. Toweel tried at times to both clinch and make space from the Australian, who continued to land left hands. After being battered for well over a minute, Toweel finally went down and through the ropes after Carruthers straightened him up with a left uppercut on the ropes and landed a sequence of ten hard punches with both hands. Toweel somehow pulled himself back into the ring and to his feet before the count of ten. Carruthers landed another six hard left hands and Toweel crumpled to the canvas, unable to beat the count.

Reporters ringside stated that Carruthers had thrown 110 punches in the 2:19 it took to take the title from Toweel, who didn’t land one. The new champion credited his trainer, Bill McConnell, with the game plan, knowing that the champion was a slow starter, their plan was to start fast and build an early lead but both fighter and trainer were shocked at how quickly the fight ended as Toweel had never been knocked down. Toweel blamed the poor performance on difficulties he had making the bantamweight limit and wanted a rematch. Carruthers, who made £1500 compared to Toweel’s £7000 for the first bout, returned to Australia and was mobbed by fans but his team was already in negotiations for the rematch and the bout would take place, again in South Africa, except this time Carruthers would be paid the £7000 purse. 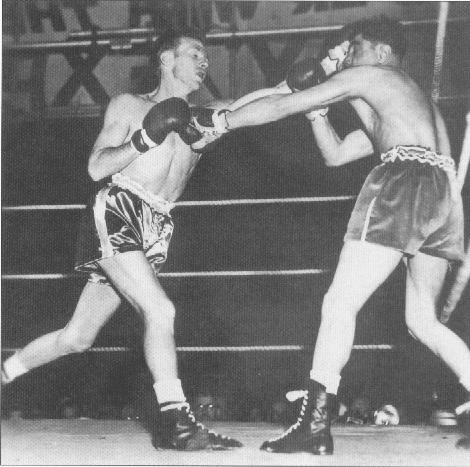 Jimmy’s left hand was a potent weapon against Toweel

The rematch took place in March, 1953, again at The Rand stadium in Johannesburg, this time in front of 35,000 fans. Toweel put up a much better performance, pressuring Carruthers and fighting on even terms through the first six rounds before Carruthers hurt him in round seven. Toweel continued to march forward but Carruthers had his measure and finally dropped him in round ten and Toweel was counted out.

Toweel fought three more times in his career, well above the bantamweight limit, losing twice before retiring. He eventually moved to Australia, where he lived until his death in 2008 at age 79. The first Australian world champion defended his title two more times,  the first a decision win over American William “Pappy” Gault in Sydney in front of an estimated 40,000 fans. After the bout it was discovered that Carruthers had a 30 foot tapeworm in his stomach. His second defence was another decision win, this time over Thailand’s Chamroen Songkitrat, a bout that was fought barefoot, during a storm in front of close to 70,000 fans in Bangkok Thailand.

Carruthers retired undefeated and vacated his bantamweight title in 1954 but was lured back into the ring for financial reasons in 1961. Campaigning as a featherweight, he lost four of his six contests over a 12 month period and retired again in 1962. Carruthers owned and managed a hotel and later a health food cafe after boxing but suffered from Parkinson’s disease and later lung cancer, which caused his death in 1990.

Previous article
« Power Ranking The Patriots’ 2017 Opponents
Next article
What Were They Thinking? Former UFC Star War Machine Sentenced to 36 Years to Life in Prison »

Archie Moore Down Under: Part Three

Archie Moore resumed training immediately after the controversial ending to his fight ...

Archie Moore Down Under: Part Two