Archie Moore resumed training immediately after the controversial ending to his fight with Fred Henneberry. Prior to the Henneberry bout Moore had already been matched with the American Olympic champion Carmen Barth, who had taken Gold in the 1932 Los Angeles Games. While Moore had come to Australia to make a name for himself, Barth had come to Australia hoping to breathe life back into his career after losing a 1938 title challenge against Freddie Steele, followed by back to back losses to end that year. Barth had been inactive prior to his trip to Australia and was no match for the Australian and British Empire champion Ron Richards in his Australian debut, losing a wide 12 round decision.

Fred Henneberry, meanwhile, had requested a return with Moore as he was still bitter about the way their first bout ended. Henneberry also said he was happy to meet Ron Richards for a ninth time while Moore dealt with Barth. The debate over the “no foul” rule that was used in Australia waged on with many thinking Australia should adopt the rules used in Great Britain, which would have seen Moore disqualified against Henneberry. Sydney Stadium referee Joe Wallis, who had a long running feud with Fred Henneberry and had disqualified him a number of times, was quoted after the Moore-Henneberry bout that the finish made him “look like a clown at a sideshow” and that he felt the medical examination that prolonged the decision to award the fight to Moore was unnecessary and that he was “competent enough to give a decision promptly on a foul blow.”

Moore’s bout with Barth was to take place one week after the fight with Henneberry but it would be in the city of Brisbane in Queensland and would show Moore off to a new audience after his previous bouts in Sydney, Melbourne, Adelaide and Hobart. While Barth was showing good form in his training exhibitions, after seeing Moore in action against Henneberry he requested more time before he met Moore, a theme that had been common during Moore’s trip to Australia. Moore was scheduled to meet Ron Richards in a rematch one week after fighting Barth so the bout with Barth was delayed until after the Richards fight and Moore’s trip to Brisbane was delayed.

The postponement of the Barth bout paved the way for Moore-Richards on the 11th of July again at Sydney Stadium. Richards had kept up his training following his win over Barth in May and was working with a new sparring partner to help prepare him for Moore, Jack McNamee. McNamee had worked as Moore’s sparring partner after he succumbed to Archie in Moore’s Australian debut and had sold his services to the Richards camp, claiming that he had inside secrets that could help Richards avenge his April loss to Moore. Richards was said to be in the best shape he had been in for years and his open workouts gave many locals confidence that he could upset Moore in the return.

While training for the Richards bout, Moore’s manager Jack Richardson left Australia, returning to the United States to try and negotiate a fight with world middleweight champion Ken Overlin. Richardson had received a cable from Overlin’s team stating that they were interested in defending their title against Moore, who earned himself the number five ranking in the world (according to Ring Magazine) after his wins over Richards, Henneberry and Sabatino. Not long after the departure of Richardson, Moore announced to the newspapers his intention to return to the United States following his bout with Richards and that he was not interested in fighting Barth or a return with Henneberry.

However Stadiums Ltd saw the future earning potential in keeping Moore in Australia and even offered to ship his wife to Sydney if he would stay for more bouts. Moore had married just days before leaving for Australia and his inability to bring his wife to Australia almost caused Moore and Richardson to sever ties before their partnership had begun. Stadiums Ltd had offered Moore good money to meet Henneberry in a rematch as well as the winner of an upcoming bout between Barth and another imported American Leon Zorrita. There were also rumours circulating that an offer had been made to world rated middleweight Charley Burley to come to Australia and for Alabama Kid to return from New Zealand for a bout with Moore.

The offers tempted Moore to stay and there were reports that he was to travel to Brisbane after the Richards bout to meet the Barth-Zorrita winner. Moore kept the fans guessing about whether he would remain in Sydney for more bouts or if the Richards rematch would be his last bout down under. Both Richards and Moore stated that they were in the best possible condition heading into one of the biggest fights ever staged in Australia. Both men made the weight in the afternoon before 12,000 spectators filled Sydney Stadium to witness the 12-round bout.

The bout started slowly. Moore was cautious not to walk into another right hand as he did in the opening bout and Richards sat off Moore, looking for opportunities to counter. Very little happened in the opening round, but Richards was the busier and landed well to the body when he threw. The Australian champion began to lead in the second, which played into Moore’s hands early in the round. Moore bobbed and weaved low beneath Richards’ leads and countered with short right hands to the side of the head on the inside. Richards, however, found his range midway through the round and countered a Moore jab with a solid right hand and followed it up with more heavy right hands that forced Moore to retreat. The crowd were on their feet at the end of the second round as Moore barely weathered the Richards onslaught. 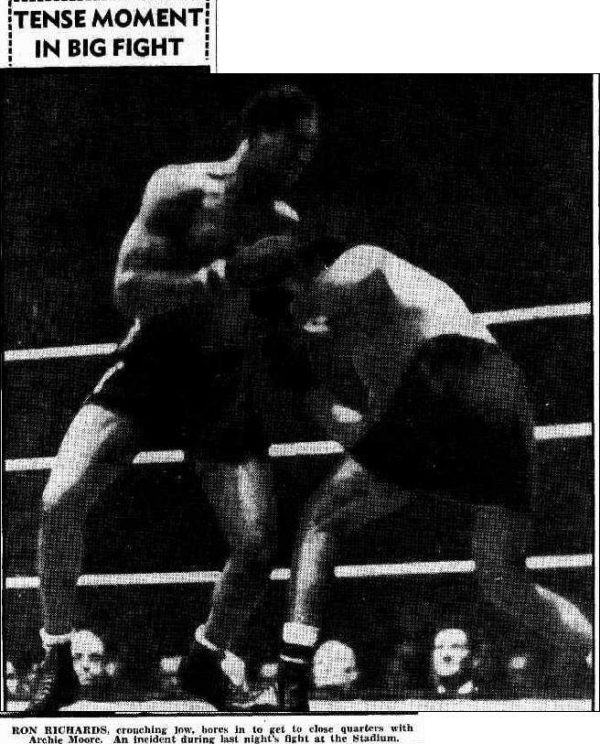 Moore continued defensively in the third round but he had recovered and was doing well making Richards miss but his left jab, while landing, wasn’t landing with the same force that it did in the first fight. Archie’s defence was better in this round and he caught many of Richards’ right hands on his arms. Moore also had success drawing Richards in again in the third round where his short counter punches and sharper defence gave him the advantage. This continued into the fourth round and fifth as Moore gave Richards a lesson at infighting, scoring with both hands while making Richards miss. Richards returned to his corner with blood dripping from his nose after the one sided fifth round.

Having trouble with Moore’s head movement, Richards began targeting Moore’s body in the sixth round whenever the American crouched and although Moore had success countering, Richards landed solidly with his left hand to the body and had his best success since round two. Moore’s jab continued landing in the seventh round but still without any great force. Richards continued to target his body. Moore was beginning to pull away on the scorecards and Richards came out in the eighth eager to even the fight up. A hard-right hand shook Moore early in the round but Moore stood on the inside and traded with Richards and was even getting the better of the action by the end of the round.

Richards went back to the body in the ninth round and a right hand to the heart landed solidly for the British Empire champion early in the round which began a spirited rally. Richards punished Moore’s body with both hands for the duration of the ninth round and Moore was holding on and seemed relieved when the bell ended the stanza. Richards continued his assault in the tenth and although Moore had success with his jab and right hand, Richards’ body blows looked to have taken their toll on Moore and his blows lacked the power that Richards’ had. 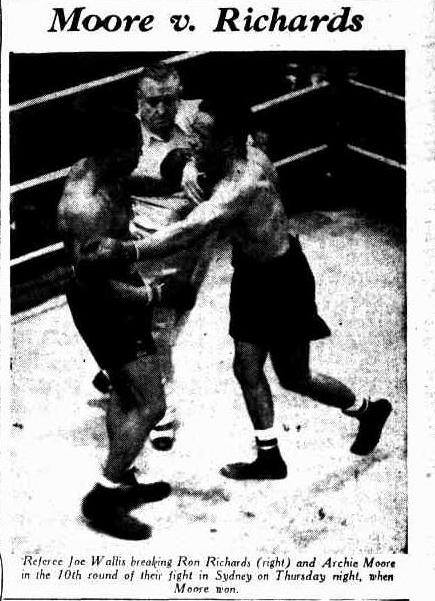 Heading into the final two rounds the bout was in the air after Richards’ success in the previous rounds and now it was Moore’s turn to rally. Moore bobbed and weaved and took the fight to Richards for the duration of the eleventh round. Richards attempted to punch with Moore, but Moore was clever and buried his head into Richards’ chest and shoulders to avoid Richards’ swings and outpunched the local thoroughly to take round. The last round continued as the eleventh did and Moore’s work-rate was too high for Richards, who was spent after his rally in the earlier rounds. Richards scored with uppercuts but was thoroughly outpunched by Moore, who scored combinations with both hands and outpunched Richards by “at least four to one.” At the end of the twelfth-round referee Joe Wallis placed his hand on Moore’s head, the Australian custom for announcing the winner of the fight.

After the fight it was revealed that Moore had broken his left hand in the second round of the fight and it had “swollen up like a 6oz glove,” which explained why his jab wasn’t being thrown with the same force as it was in their first fight less than three months prior. Moore had nothing but praise for his opponent after the bout stating that Richards was the best fighter he had fought and the hardest puncher, and that he would have success if he came to America. Richards offered no excuses for the loss and was pleased with his effort and while he stated he thought he could do better again in a third fight, he was pleased with the experience he gained in the meetings with Moore.

After another sell-out fight Stadiums Ltd were even more eager to keep Moore in Australia. Moore’s hand was examined by a doctor the day after the bout and the doctor said Moore wouldn’t be able to punch with it for at least six weeks. While Stadiums Ltd offered to pay Moore’s expenses to remain in Australia, Moore received word from home that his wife was ill and that, combined with the broken hand, made the decision for him and he left for America less than a week after the bout with Richards. In his time in Australia Moore had defeated three men who had been ranked among the top ten middleweights in the world and only one of his fights had gone the distance. Despite his manager being in negotiations for a title fight with Ken Overlin upon his return, Moore would have to wait 12 years before he finally had his shot at a world title. 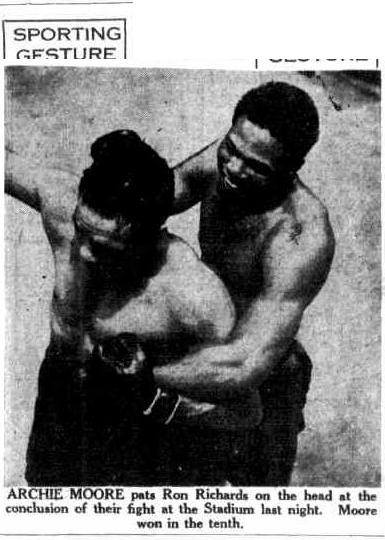 Both Fred Henneberry and Ron Richards’ careers dwindled after their bouts with Moore. The two men would fight each other two more times and Henneberry would again be disqualified in both meetings, leaving their final tally at 6-3-1 in favour of Richards, with five of Richards’ wins coming by disqualification. The final two bouts with Richards were Henneberry’s last. He retired from the ring to become a publican and lived until he was 86 years old in the small town of Dungog in New South Wales. Richards fought on until 1945 but his drinking habits diminished his abilities in the ring and his results were sporadic. Richards was broke a year after retiring and while he was intoxicated he was often beaten senseless by patrons of the bars he frequented. Richards was sent to the Palm Island Aboriginal Settlement by the Police after he was arrested for vagrancy and because they were worried for his health. He worked there as a carpenter for 17 years before he died in 1967.

Rope A Dope: Preview Joshua vs Usyk! Is Plant Under Canelo’s Skin?

The Crushing Power Of Sonny Liston