A bunch of down-to-the-wire barn-burners

At the start of the 1948-49 season, Jasper did not look like they would be close to making it to the state finals as they started the year out slowly. They came together at tourney time. Entering the tournament they were just above .500 at 11-9. They won 10-straight in the tournament, which culminated in a one-point championship game win over the Madison Cubs. All 10 players for Jasper either played college basketball or were offered a scholarship, and all 10 earned a college degree, which O’Neill was fiercely proud of. Find the top basketball betting sites!

Madison entered the game as one of the best teams in the state and was the overwhelming favorite. Even though the game was close throughout, Jasper got off to a quick start and held a lead throughout the entire game. Madison star Dee Monroe put up one of the greatest performances in State Finals history, scoring 36 points but it was not enough as Jasper held on to a 62-61 victory. 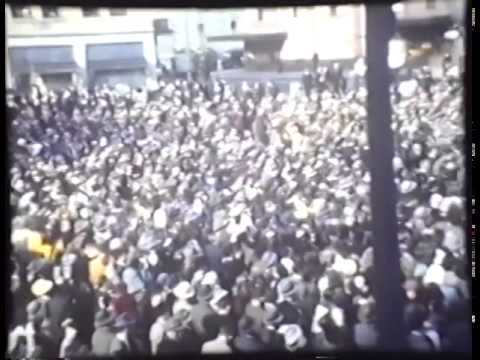 Check out the top sportsbook bonuses for betting on basketball

Carmel proved a big school can be a Cinderella story as they lost 7 games during the season and Head Coach Eric Clark was under tremendous pressure heading into the state tournament, and it was felt through the entire community. But then the Greyhounds got hot! They headed to the Final Four, where everybody knew they had the talent, but nobody thought they could win it.

They won the morning game and had to come back and play again that night with a shallow team of five main players. Their opponent was the heavily favored and very talented East Chicago Washington.

The championship game was a battle from the start. Early in the fourth quarter, Carmel went up by 10 points, and it looked like the upset was going to happen, but Washington would not die and fought back and took the lead by one point with just 11 seconds left. A jump ball was called, and Carmel’s Bart Burrow caught it and threw it to Jon Ogle down the court, who scored. Washington took a last-second shot but missed, and in true Hoosier Hysteria fashion, Carmel won the state title. Thanks to Damon Bailey over 41,000 packed the Hoosier dome for what would be a memorable clash between two very good teams. Bedford North Lawrence won their first State Championship, 63-60, over top-ranked and previously unbeaten Concord. Bailey capped his storybook career with 30 points in the title game, including his team`s final 11 in the last 2 1/2 minutes of the game. He broke the state scoring record two weeks earlier and finished his career with 3,134 points. On this night Bailey became one of the biggest legends in the annals of the Hoosier state. 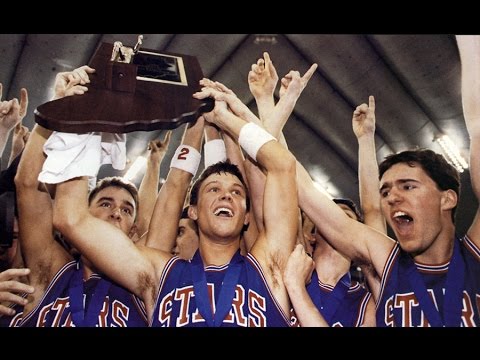 Red Devils Head Coach George Griffith had led the foundation with state finals trips in 1985 and 1987 when they were beaten by the Marion Giants, who won all 3 State Championships from 1985-87. In 1992 they broke through, but it definitely was not easy.

The state championship itself, was clinched March 28, 1992, at the Hoosier Dome in Indianapolis with an overtime victory of 77-73 over Lafayette Jeff. Earlier in the day, the Red Devils edged Jeffersonville 94-92, also in overtime, becoming the first team in tournament history to win both games in overtime. So make no mistake, it was not easy and if you change one play in each game history would be re-written, it was that close.

It was Woody Austin with 14.5 seconds left in regulation that nailed a heroic 3-pointer to send the final to overtime. Austin would go on to have a very good career at Purdue, but with one shot he became a legend in Richmond forever. 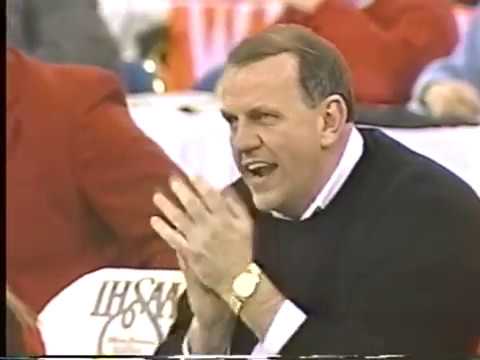 A game so great they based a movie on it. I don’t think there is much left to be said about it. Milan actually controlled the first half and led by 8 points at one point left. Star guard Bobby Plump hit the game-winner but Ray Craft carried most of the scoring through the game.

The 1961 Championship Game was played between Kokomo and Indianapolis Manual at Butler’s Hinkle Fieldhouse. The crowd numbered nearly 15,000, with about 6,000 of those fans calling Kokomo home.

A couple of legends led Manual in Tom and Dick Van Arsdale. They were twins who would later be named co-Mr. Basketball and inducted into the Indiana Basketball Hall of Fame.

The Redskins led 13-12 after one period and 35-28 at the halftime break. Kokomo rallied back to bring it within one at the end of the third quarter, 43-42. The game’s final eight minutes would prove to be a complete barn-burner as Kokomo and Manual battled for the State Championship.

With 24 seconds left in the game, Kokomo had cut the lead to 62-60 after Goose Ligon hit one of two free throws. After a series of jump balls, Kokomo’s Richie Scott hit a shot from the corner to tie the game at 62. Scott later missed free throws that would have won the game in regulation. Instead, and to the delight of the non-partisan fans watching and listening to the game, it was going to overtime.

Overtime would also prove to be an epic battle as Kokomo’s Babe Pryor and Manuel’s Dick VanArsdale traded baskets. Ronnie Hughes hit a big basket to make it 66-64 in favor of the Kats. VanArsdale responded, and the game was tied at 66 with just 19 ticks left. Hughes got the ball and was fouled by Manuel’s Armen Cobb with three seconds left. Hughes sank both of the pressure-free throws–to make it even worse for Manual, the first one bounced on the rim three times before going in–to give Kokomo a 68-66 lead. Manuel’s desperation shot at the buzzer missed. Kokomo had won the state title. 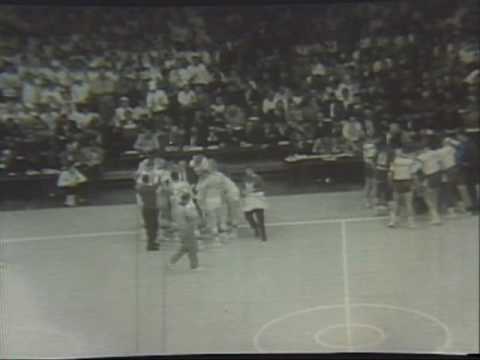 Check out the top sportsbooks for betting on basketball

The tournament was delayed almost three weeks because of winter storms, but the tournament and championship games were well worth the wait!

Muncie Central (27-3) won its sixth State Title by edging Terre Haute South 65-64 in overtime. Jack Moore, a 5-foot-9 guard, was the star of the game for Muncie, scoring 27 points, including all three of his team’s points in overtime, during the title game.

The most dramatic and memorable moment of the game came at the end of regulation as Terre Haute South’s Rich Wilson hit a mid-court shot at the buzzer to tie the game and send it to overtime. In the overtime, Jack Moore was the difference as Muncie held on to win an absolute classic. 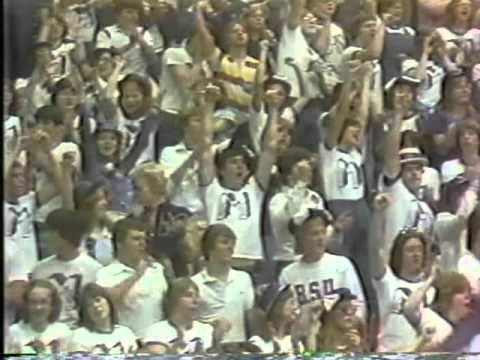 Plymouth was not a small school with around 700 kids, but they were the last school that small to win a State Tournament in the one-class system. Scott Skiles became a Hoosier legend on this particular Saturday afternoon.

Skiles scored 30 in the semifinal to lead Plymouth past heavily favored Indianapolis Cathedral, 62-59. Next up came the task of beating Gary Roosevelt and Roosevelt was stacked! With the services of Renaldo Thomas, Anthony Stewart, Ronnie Bradley, and Winston Garland, Roosevelt was the best team in the state in 1982.

The Panthers’ star power, however, didn’t translate to winning the State Title as Plymouth (28-1) and its own standout, Scott Skiles, prevailed in a 75-74 double-overtime shootout at Market Square Arena. Skiles finished with 39 points, one point shy of the record for the highest scoring total in a state championship game. Thomas scored a team-high 19 points, Stewart had 18, Bradley added 14, and Garland contributed 10.

A lot of people forget the one glaring stat from this game was Plymouth’s free throw advantage of 38-16, which looks a little shaky, to say the least. But on this night Scott Skiles was a man-child who would refuse to let his team lose. Hindsight is always 20/20, but looking back was it really that big of an upset? Sure Roosevelt had multiple division-one players, but Skiles was hands down the best player on the court that night, and he would prove that later on when he starred at Michigan State and led the Spartans to the Sweet 16, losing controversially to Kansas in Kansas in 1986. Skiles then went on to an NBA career that would last a decade and then became a coach in the NBA. 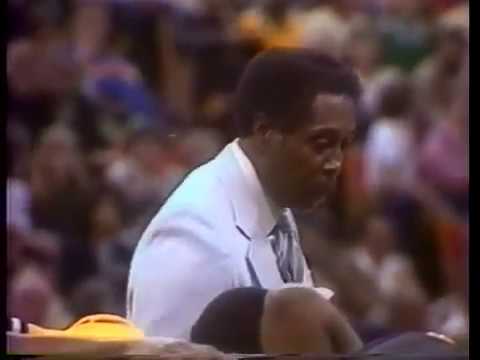 Previous article
« US Open Betting Preview: Tips and Predictions
Next article
Paul Brown is the Greatest Head Coach of All Time »

On Sunday, the New York Yankees removed the number 21 of Paul ...