The Grueling Truth - Where Legends Speak / NBA / Should the Celtics Bother Bringing Terry Rozier Back Even if Kyrie Irving Leaves?

Should the Celtics Bother Bringing Terry Rozier Back Even if Kyrie Irving Leaves?

Even with the possibility of Kyrie Irving walking in free agency, should the Boston Celtics even bother to keep Terry Rozier?

This is going to make me sound like the biggest Terry Rozier hater out there, especially after I said the Celtics couldn’t afford to give him any minutes in the playoffs, but this is a question worth asking at this point.

If Kyrie Irving leaves, should the Celtics let Rozier walk as well?

If you asked anybody who watched or covered this team last year, the immediate answer would be no. Rozier was terrific in the 2018 playoffs and was one of the top five reasons the Celtics made it as far as they did. The correct answer to this question may still be no, due in large part to his performance last spring.

Another reason to keep Rozier would center around the fact that the Celtics won’t have cap space even if Kyrie leaves, so giving up a talent like Rozier for nothing (unless in a sign-and-trade) wouldn’t be a smart thing to do. A sign-and-trade wouldn’t really net the Celtics anything either since they’d only be allowed to take back around $4.5 million in salary, which is what Rozier would make in the first year of his new contract if he was included in that kind of deal.

Maybe you have hope Rozier would get back to playing at a high level in a starting role on a Kyrie-less Celtics team. But if Irving’s gone, what reason did Rozier give Brad Stevens this year to prove he earned that kind of role.

Not only did Rozier play mediocre basketball while failing to adapt to a lesser role, but he sounded off about his discontent with the role after the Celtics were eliminated.

“I don’t give a f— what nobody say, I sacrificed the most out of anybody. I’m a top point guard in this league. I feel like it’s a fresh start, whether I’m here or whether I’m gone.”

If Irving were to leave, Rozier wouldn’t be the deserving starter. That would belong to Marcus Smart, who had a terrific year that was unfortunately derailed with a torn oblique right before the playoffs began.

Not only did Smart excel when there were almost too many mouths to feed, but he showed great leadership both on and off the floor, especially during a time when Rozier was making sure everyone knew how pissed he was. 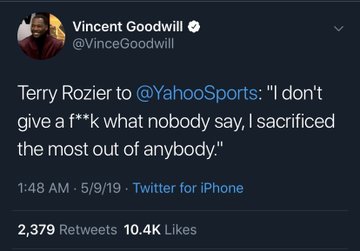 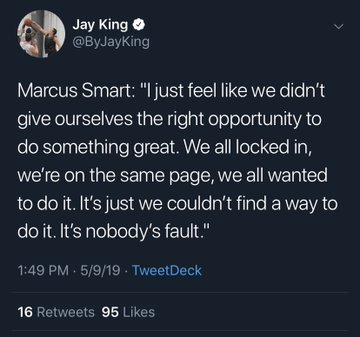 Logically, it doesn’t make sense for the Celtics to let Rozier go. While I may have painted an unappealing picture of Rozier’s actions and personality, the team as a whole seems to enjoy his presence in the locker room.

But there’s something about how he’s approaching his free agency that doesn’t sit right. This situation is long from over, so we’ll just have to wait and see how Rozier handles his first go-round of NBA free agency. So far, he’s off to a rough start.

The Boston Celtics went from competing in the Eastern Conference Finals to ...