The NBA announced on July 12 that the league’s Board of Governors had approved two things in their board meeting. The first is harsher penalties for “take fouls,” and the second is the permanent implementation of the Play-In Tournament. Check out the top sports betting sites for betting on the NBA.

There has been a lot of discussion about the “take fouls” penalty in recent seasons. A take foul occurs when a defender fouls someone without making a play on the ball in order to prevent a transition opportunity.

Check out the top sportsbooks for betting on the NBA

In the past, such a foul has only resulted in the disadvantaged team taking the ball out of bounds. However, since 2018, when a defender commits a take foul in the G League, the fouled team retains possession and receives one free throw before play resumes.

According to the new take foul rules, a take foul now results in the offensive team being awarded a free throw, which can be taken by any player in the game at the time of the foul. They will also keep possession of the ball, and the player who committed the foul will be penalized.

The new rule has some disclaimers: teams can commit a take foul in the final two minutes of the fourth quarter or any overtime period without incurring the new penalty, either to stop the clock during a comeback attempt or to prevent the offensive team from attempting a 3-point shot. The take-foul penalty will not apply if the offensive player is fouled while shooting, in which case the penalty will be applied as before.

The transition of the take foul penalty will be implemented in the summer leagues of 2022, which will include brief editions in San Francisco and Salt Lake City.

NBA Communications
2022-11-30 18:10
The NBA Board of Governors today approved a change to the playing rules that will impose a heightened penalty when a defensive player commits a “transition take foul”and approved the adoption of the NBA Play-In Tournament on a full-time basis. https://t.co/zeEDP4JEp5 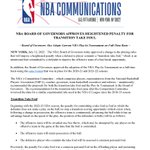 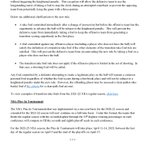 According to ESPN’s Adrian Wojnarowski, the league’s Board of Governors plans to make the tournament an annual event in the future. Previously, the play-in tournament was approved on a recurring basis.

The NBA introduced the play-in tournament during the 2020-21 season, which was limited to 72 games due to the COVID-19 pandemic. The Play-In Tournament has been used in its current format for the last two seasons, with teams finishing seventh, eighth, ninth, and tenth in the East and West competing for the final two playoff spots in each conference.

Despite the fact that the Play-In Tournament was widely regarded as a success, a vocal minority opposed it. Los Angeles Lakers’ star LeBron James is one of them.

“Whoever came up with that s–t needs to be fired,” James told reporters in May 2021.

However, others disagreed with James. The New Orleans Pelicans are reportedly an excellent example of why the play-in has been so successful. The Pelicans were 15-26 and 13th in the West at halftime without Zion Williamson. Their postseason prospects were bleak.

According to reports, if this had happened in the past, the organization might have given up on them. Instead, the Pels were aggressive at the trade deadline, acquiring CJ McCollum.

McCollum was instrumental in New Orleans qualifying for the play-in tournament and claiming the No. 8 seed with two victories. That was a huge boost for the upcoming season in New Orleans.