Nashville: Despite a sloppy start the Xavier Musketeers rolled past Texas Southern 102-83 to advance to Sunday’s second-round matchup with the winner of Missouri and Florida State. Xavier showed grit as Texas Southern made a push at the lead right before the half cutting it down to 49-37. The Musketeers battled each punch and kept the game out of reach of the Tigers for the entire night. The Musketeers will look to feed off tonight’s massive win as they face a challenging game on Sunday with either Michael Porter Jr and the Missouri Tigers or CJ Walker and the Florida State Seminoles.

The Musketeers were led by J.P. Macura, and Trevon Bluiett both had a major impact on the Xavier win.

Xavier battled a very chippy game with Texas Southern in which the Tigers were called for a few technicals and flagrant fouls, however, if you’re a Xavier fan you have to feel good on how this team battled all game long. This type of game will get the Musketeers battle tested for a tough game on Sunday.

“Anytime you can advance in the NCAA
tournament, you consider yourself tournament. The
game was one of the choppiest ones I thought we
played all year.
Texas Southern’s kids never quit. We had a couple
issues with fouls, specifically with our point guards.
Sort of hampered us and made us a little bit nervous in
terms of like how we were going to finish the game. So
we played way more zone than we were used to than
we wanted to.
And then, you know, you compound that with Naji
Marshall going out with his back, we had a thin deck,
and so, fortunately, the scorer’s table corrected the
error. We knew that was Quentin’s fourth. It wasn’t
aesthetically pleasing by any means, but we will play on Sunday.” 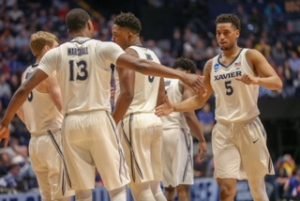