The Greatest Final Fours of All-Time

You’ve probably seen lists of the best Final Four *games* of the NCAA basketball tournament, but today on The Grueling Truth, we’re talking about the most compelling, interesting, exciting and most of all *fun* NCAA Final Four rounds. Enjoy! If you want to bet on this year’s Final Four check out the best bookmakers!

Danny Manning was the driving force behind one of the greatest Cinderella runs in Tournament history, as he led the 6th seeded Jayhawks to an improbable championship. The Final Four saw two quality games, as Kansas, upset Duke 66-59 and Oklahoma beat Arizona 86-78. The real drama came in the final as heavily favored Oklahoma was stunned by their conference rival in a classic final 83-79.

Check out the top sportsbook bonuses for the Final Four!

This Final Four included one of the most shocking upsets in Tourney history, with Duke beating the undefeated UNLV by two points in a classic game. What made this even more surprising was that Duke avenged a 30-point blowout at the hands of UNLV in the title game just the year before. The possibility of a Duke-UNC title game was ended by Kansas, who beat the Heels 77-73 in their Final Four matchup. The Final was a little anti-climatic as Duke took down the Jayhawks, 72-65.

1982 Final Four started out with the Tar Heels beating a young Phi Slamma Jamma team, 68-63, in one semifinal. The other semifinal saw a defensive struggle ensue as Georgetown outlasted Louisville, 50-46. The championship was a classic that wasn’t decided until the final seconds when a freshman named Michael Jordan hit the go-ahead basket. The Hoyas had a final shot to win until guard Fred Brown inadvertently threw the ball to the Tar Heels’ James Worthy, ending the game.

This Final Four had a heavy favorite in Georgetown, a Cinderella in Villanova, and two very talented teams in Memphis and St.Johns. The Hoyas and Redmen were bitter rivals and had played close games all year, but in this game, the Hoyas controlled the game the whole way, winning comfortably. Villanova once again pulled a big upset, taking down star Keith Lee’s Tigers in the other semifinal. The final was one of the greatest games in college basketball history, as Villanova played an almost perfect game to squeak past Georgetown, 66-64.

This Final Four was truly what put March Madness on the map. The first game of the day pitted Cinderella Pennsylvania against Michigan State and the legendary Magic Johnson, and it was over very quickly: Michigan State dominated from the opening tip to send the Cinderella Quakers packing by a count of 101-67.

The second game of the afternoon was a classic pitting DePaul’s Mark Aguirre against the Sycamores’ Larry Bird. The Sycamores prevailed with a hard-fought 76-74 victory behind Bird’s spectacular play. The championship game was maybe the most anticipated title game in history. The Spartans won the game, 75-64, as the Sycamores couldn’t convert from the free-throw line all night; the other difference was the Spartans had two stars in Magic and Greg Kelser while the Sycamores just had Bird.

1993 Final Four started out with the Tar Heels handling the Jayhawks, 78-68. What followed in the next two games is what makes this one of the greatest Final Fours ever. Michigan beat Kentucky in a classic, 81-78, and then battled North Carolina in the final. The Tar Heels prevailed in a tense hard-fought contest, 77-73, which will always be remembered for Fab Five star Chris Webber giving away his team’s last possession to win the game when he was charged with a timeout that the Wolverines did not have left.

North Carolina won two triple-overtime games to become tournament champions. They started off with a 74-70 win over Michigan State and finished up with a 54-53 overtime win over the Kansas Jayhawks. The Jayhawks had blown out San Francisco 80-56 in their semi-final game. Check out all of the top new sportsbooks! The Butler Bulldogs continued one of the most improbable runs in tournament history by winning a tight classic against Michigan State, moving the small school from Indianapolis on into the title game. Duke made light work of Bob Huggins’s West Virginia Mountaineers in their semi-final game, setting up the ultimate David vs. Goliath matchup in title game history.

This championship game was played in Indianapolis and conjured up images of the movie Hoosiers as the Bulldogs battled tooth and nail with the Blue Devils, before finally succumbing at the buzzer when Gordon Hayward’s half-court shot hit off the rim. 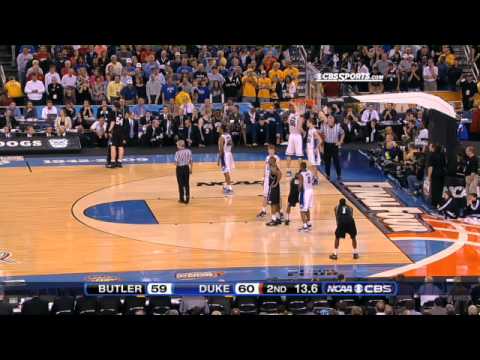 The Final Minute of the National Title Game

This Final Four began with Syracuse blowing out Cinderella Providence with relative ease. The second game of the day was in no way a blowout as the high-powered Hoosiers, and Runnin Rebels meet in a battle that went down to the final seconds. Steve Alford and Freddie Banks staged a shootout with Alford scoring 33 points and Banks scoring 38. The Hoosiers depth would be the difference in a 97-93 victory.

The championship game was a nip-and-tuck battle decided when freshman Derrick Coleman missed a free throw to give the Hoosiers one last opportunity. Keith Smart took advantage of that last shot as he nailed a baseline jumper with just one second remaining to give Bob Knight his third NCAA Title.

Check out the top sportsbook Bonuses!

This was a Final Four that included two Cinderella teams playing each other in the first semi-final, as N.C. State handled Georgia, 67-60. The other semi-final was a battle of titans, as Houston’s Phi Slamma Jamma battled Louisville’s high-flying Cardinals. The Cougars came out on top in a battle of acrobatics that included almost two many dunks to count.

The championship game was considered by most to be a foregone conclusion, but somebody forgot to tell the Wolf Pack. Houston struggled to hit free throws over the last four minutes of the game, and this would cost them dearly. The game ended as Lorenzo Charles dunked the ball right as the buzzer sounded to give the Wolf Pack an improbable championship title.

Check out the top sports betting pages to bet on tonight's championship ...

The 9 Greatest Performances By a Player in Final Four History

Bird makes this list on the basis of the Sycamores' semifinal victory ...