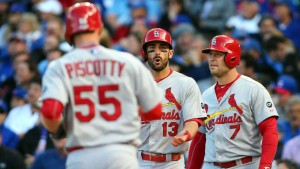 But, the time has come for the St. Louis Cardinals. The time has come to give up the throne as the beast of the National League Central. The Pittsburgh Pirates and the hated Chicago Cubs are picked to finish ahead of the Cardinals, and on paper – they have the better roster. Cardinal fans and executive’s have used the same line for many season’s – just get to the big dance, and you never know. Last year, the big dance came to an abrupt halt, as the Cubs whipped the Cardinals in 4 games. Was that the beginning of the end for St. Louis?

The off-season did not go as many planned for the Cardinals. Whether the Cardinals General Manager Mozieliak made a great effort to get to garner free agents or not, he failed at it. Sure, the St. Louis Cardinals won 100 games a season ago, but the offense was one of the worst in Major League Baseball. St. Louis finished 12th in baseball with a .253 batting average, but scored just 647 runs, which was 24th. The offense did not get any better in the off-season, and most likely got worse. Jason Heyward was one of the top offensive players in 2015, and he went to the rival Chicago Cubs. The Cardinals did not add a bat, just relied on same ole, same ole.

Stephen Piscotty is a hitter, and will a nice weapon in the Cardinals lineup. Outside of that, where are the Cardinals going to get consistent offense? Matt Carpenter is a grinder, but at 30 years old, his OBP has declined the past three seasons. Carpenter, batting lead-off is fine, but with 28 homeruns a season ago, lead-off may not be the best fit for him. But, who is going to bat lead-off in this lineup? Matt Holliday, bless his heart, is a great guy. He has had a great career. Matt Holliday has given the St. Louis Cardinals all he can for the past 6.5 seasons. But, Matt Holliday is 36 years old. The best years are behind Matt Holliday. Playing in just 73 games last year, Matt Holliday hit just 4 homeruns. Holliday’s homerun numbers have declined the past three season’s.

The cleanup spot for the St. Louis Cardinals could be the biggest joke in Major League Baseball. Randal Grichuk burst on the scene last season, but his strikeouts are alarming. With this offense – needing multiple hits to score a run, strikeouts do not come in handy. The Cardinals have had success in the past on moving runners over, and then driving them in. Grichuk is the main cog for a huge rise in strikeouts. He struck out 33% of the time last season, and early in 2016, it doesn’t seem to have changed. Cardinals fans will find this very unpopular – as Yadier Molina is by far the fan favorite for the St. Louis Cardinals. But, he is a single hitter, almost exclusively now. Molina will be 34 years old, and injuries have started to mount. The Cardinals were hoping Brayan Pena could spell Molina more often this season, but Pena has found himself on the disabled list to start the season. Why we are on the terms of disabled list, sure Jhonny Peralta would help this team, and the Cardinals think Tommy Pham is an answer. But, an outfield of Tommy Pham, Randal Grichuk and Stephen Piscotty sounds like a club that is trying to be too loyal.

Yoenis Cespedes was available. And if nothing else, could have sparked a stagnant offense. Chris Davis would provide double the power anyone else on this Cardinals roster would outside of maybe Matt Carpenter. If the Cardinals wanted Jason Heyward, they could have paid Jason Heyward. There was word he took less in Chicago, but let’s not kid ourselves, if the Cardinals wanted Jason Heyward, they could have paid him to stay in St. Louis. No offensive additions in the off-season other than Brayan Pena and Jedd Gyroko? The loss of Johnny Peralta is a big one at shortstop. I forgot to add the addition of the underwhelming offense of shortstop Ruben Tejada, but he is on the disabled list as well. So, the Cardinals give the call to Aledmys Diaz, who is clearly not ready for the big leagues.

Now, the Cardinals have a great starting pitching staff. But, the Cardinals pitched at an unbelievable clip last season, especially with runners in scoring position. History shows that will not continue into the new season. Adam Wainwright is another guy the Cardinals have continued to show extreme loyalty to. It’s understood he has been the ace of this staff, but Wainwright would make a much better #2 pitcher. Adding Mike Leake was a nice addition, and if you ask the Cardinals brass – they will tell you, they tried like heck to get David Price, but again, a fail. The Cardinals are going to go into 2016 with Carlos Martinez and Michael Wacha, and rely on them to make 30 starts. That may work out, but the odds are, it will not work out. Martinez and Wacha BOTH showed signs of injury a season ago.

To find the best site to bet on sports legally in the ...